With triple digit temperatures expected to hit the Southland over coming days, the California Independent System Operator on Tuesday warned that they could ask residents to cut power usage during peak hours to prevent strain on the state’s power grid.

The heat wave, expected to last through next week, has already brought sweltering weather to Southern California, with some regions hitting 110 degrees on Monday and Tuesday, with the hottest temps expected over the Labor Day Weekend, and as a result, Cal-ISO is worried that the amount of residents relying on air conditioning and other large appliances to stay cool could bring rolling power outages.

As a result, they issued a warning to the public that a flex alert, which calls for voluntary power conservation during the peak hours of operation from 4 p.m. to 9 p.m.

"Lowering electricity use during that time will ease strain on the system, and prevent more drastic measures, including rotating power outages,"Cal-ISO said, noting that the peak electricity demand could exceed 48,000 megawatts on Monday – the highest of the year.

Residents are urged to turn off unnecessary lights and appliances and completely shut down or at least set their thermostats to 78 degrees or higher.

Cal-ISO has already issued a Restricted Maintenance Operations order that begins Wednesday and runs through next Tuesday,  limiting maintenance operations between noon and 10 p.m. each day to ensure all power systems remain in service.

A flex alert was issued on Aug. 17 as well, when temperatures exceeded 100 degrees.

Rolling blackouts are possible in California this week, as temperatures soar. No doubt they will be blamed on global warming, but in reality temperatures of 95F are routine in LA in September:

The real culprit is of course the over reliance on renewable energy: 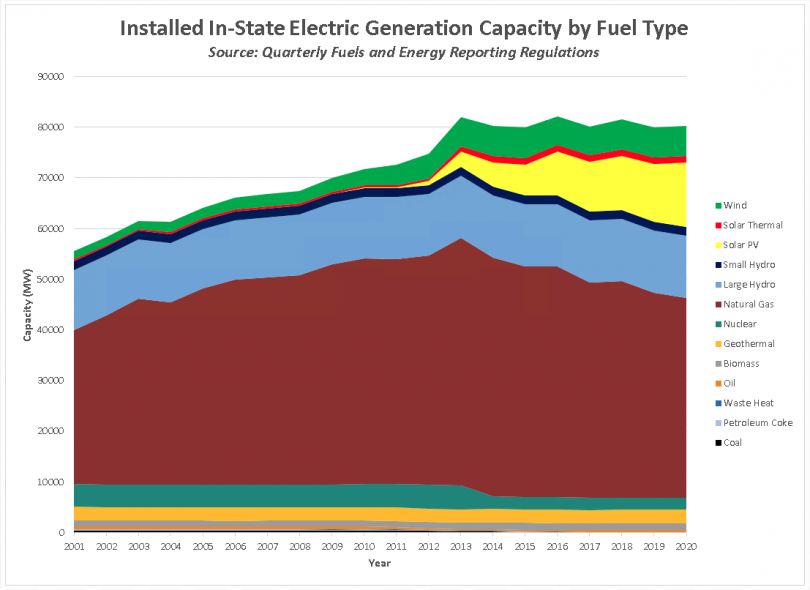 California has 53 GW of dispatchable capacity, including hydro power, after allowing for line losses. Demand can peak at over 50 GW in summer, so there is effectively no margin for outages. California does get about a third of its electricity from out of state on average, but in hot weather like this neighbouring states may also be short of supply.

In particular, natural gas power capacity has fallen from from 44 to 39 GW in the last ten years, and nuclear from 4 to 2 GW.

Meanwhile California has just announced plans to ban sales of petrol/diesel cars by 2035, and mandates that a third of car sales must be electric by 2026.

Californians are entitled to ask where the electricity to charge their cars will come from.