A new study in the Lancet shows that people don’t get more amiable when temperatures are 42 to 45°C.  Apparently hate tweets were lowest at 12 to 21°C but reached a “prevalence of 22%” at the highest temperatures.  Lo, verily and ka-ching, it follows that climate change will cause nastier tweets. If we pull on this logic-string, your car exhaust is making people mean, your beef steak causes political polarisation, and if everyone owned an EV, there would be no more wars.

Obviously believers will argue that we should solve our social media angst with subsidies for solar panels and cricket-chips. But skeptics will say we just need lots of reverse cycle heat pumps at 10 cents a kilowatt-hour.  Burn oil and calm the world…

Airconditioners save 20,000 lives in USA each year and reduces indoor air pollution as well.

Oh the dilemma — to stop snarky tweets on hot days, we could spend $100 trillion dollars to try to change the climate and wait for next century, or we could just go back to what we had 20 years ago — the miracle of cheap air conditioning? 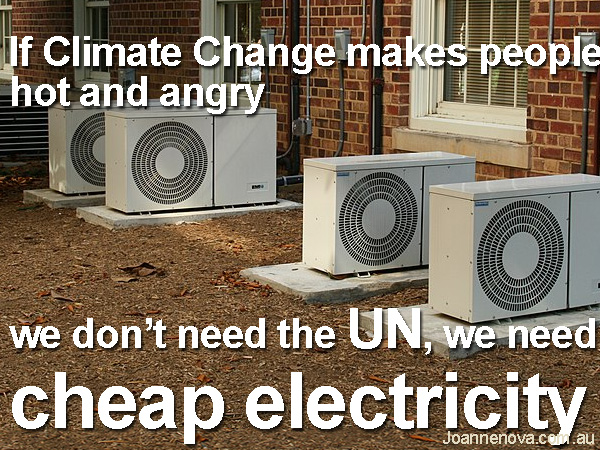 Bad climate policies breed hate and discontent. In Spain people are banned from setting their air conditioner below 27 degrees, and in the UK and Germany many people can’t afford to turn them on.  That would make anyone angry.

Hateful comments spike on social media when temperatures rise above 30 degrees Celsius (86 Fahrenheit), researchers at the Potsdam Institute for Climate Impact Research have found. … “It’s an indicator of how well people can adapt to high temperatures,” said Annika Stechemesser, lead author of the study published in The Lancet Planetary Health earlier this month. “If temperatures go too hot or too cold, we found that there’s an increase in online hate speech, no matter the socioeconomic differences, religion or political beliefs.”

“Our results show that if September is particularly hot, we can expect to see more hate on Twitter,” said Stechemesser.

The raw data consisted of more than 4 billion tweets, spanning a timeframe from May 1, 2014 to May 1, 2020. Tweets were sampled from the 1% Twitter stream using a bounding box around the USA to extract geolocated tweets in the country.

The truth was that people weren’t a lot happier at minus 3 – 6C either, and they might have been just as grumpy at minus 15 as they were at 45C, but it wasn’t part of the study. Cheap energy solves all these problems and climate fantasies solve none of them.