The BBC have finally caught up! There have been complaints for years about this:

A company that has received billions of pounds in green energy subsidies from UK taxpayers is cutting down environmentally-important forests, a BBC Panorama investigation has found.

The BBC has discovered some of the wood comes from primary forests in Canada.

The company says it only uses sawdust and waste wood.

Panorama analysed satellite images, traced logging licences and used drone filming to prove its findings. Reporter Joe Crowley also followed a truck from a Drax mill to verify it was picking up whole logs from an area of precious forest.

Ecologist Michelle Connolly told Panorama the company was destroying forests that had taken thousands of years to develop.

"It’s really a shame that British taxpayers are funding this destruction with their money. Logging natural forests and converting them into pellets to be burned for electricity, that is absolutely insane," she said.

The Drax power station in Yorkshire is a converted coal plant, which now produces 12% of the UK’s renewable electricity.

It has already received £6bn in green energy subsidies. Burning wood is considered green, but it is controversial among environmentalists. 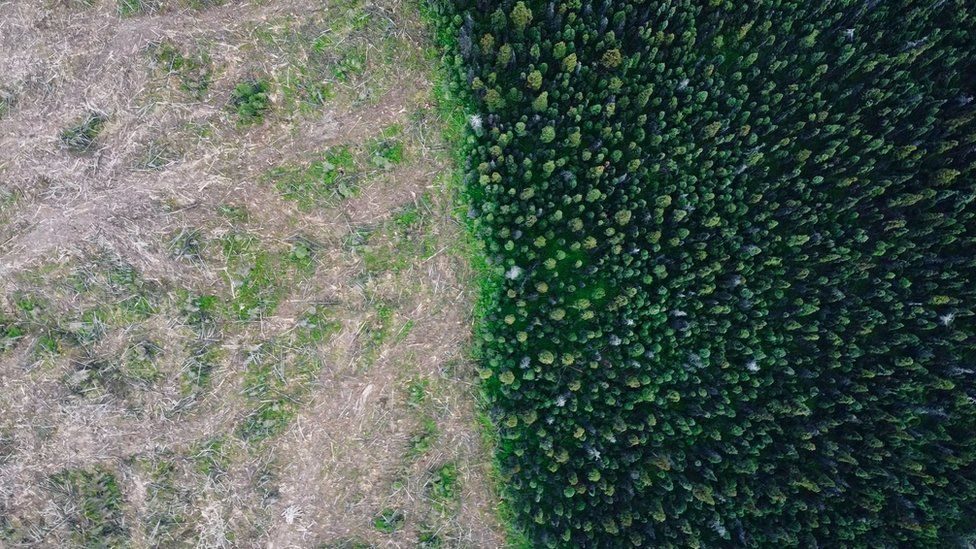 The Panorama team used drones to survey the area

One of the Drax forests is a square mile, including large areas that have been identified as rare, old-growth forest.

The provincial government of British Columbia says old-growth forests are particularly important and that companies should put off logging them.

Drax’s own responsible sourcing policy says it "will avoid damage or disturbance" to primary and old-growth forest.

However, the latest satellite pictures show Drax is now cutting down the forest. 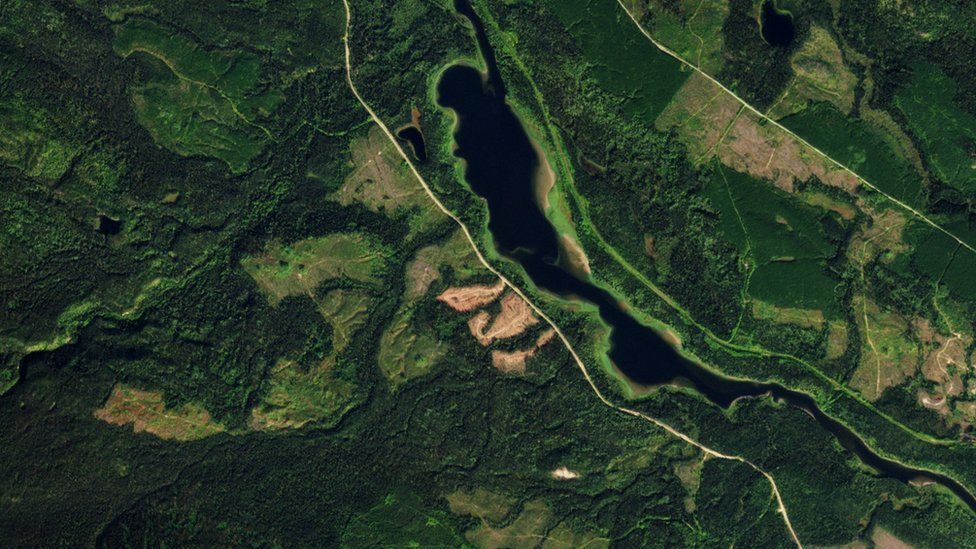 The company told Panorama many of the trees there had died, and that logging would reduce the risk of wildfires.

The entire area covered by the second Drax logging licence has already been cut down.

Drax told the BBC it had not cut down the forests itself and said it transferred the logging licences to other companies.

But Panorama checked and the authorities in British Columbia confirmed that Drax still holds the licences.

Drax said it did not use the logs from the two sites Panorama identified. It said they were sent to timber mills – to make wood products – and that Drax only used the leftover sawdust for its pellets.

The company says it does use some logs – in general – to make wood pellets. It claims it only uses ones that are small, twisted, or rotten.

But documents on a Canadian forestry database show that only 11% of the logs delivered to the two Drax plants in the past year were classified as the lowest quality, which cannot be used for wood products.

Panorama wanted to see if logs from primary forests cut down by logging companies were being transferred to Drax’s Meadowbank pellet plant. The programme filmed a truck on a 120-mile round trip: leaving the plant, collecting piles of whole logs from a forest that had been cut down by a logging company and then returning to the plant for their delivery.

Drax later admitted that it did use logs from the forest to make wood pellets. The company said they were species the timber industry did not want, and they would often be burned anyway to reduce wildfire risks.

It is amazing how Drax have changed their story as evidence mounts against them.

There has been plenty of investigative work in the US, where Drax also operate, which has come to similar conclusions. All along though, Drax has insisted they never use prime wood. That is now proven to be a lie.

I am also pleased that the BBC has pointed out the nonsense that these trees will soon be replanted, with the carbon offset. As they note:

Primary forests, which have never been logged before and store vast quantities of carbon, are not considered a sustainable source. It is highly unlikely that replanted trees will ever hold as much carbon as the old forest.

The government however finds itself in the horns of a dilemma. Without this pretend reduction in carbon emissions, it would be nowhere near meeting its climate targets.

If it decides to stop treating biomass as renewable, it will have to drastically ramp up wind and solar instead.

Bioenergy accounts for 13% of the UK’s electricity generation, which is more than onshore wind.