Why even have an FDA?

If the CDC puts a particular vaccine on the childhood vaccine schedule Big Pharma automatically is thereafter liability free “forever” for that vaccine. And that may happen in the next 24 hours. So this is a Platinum Jackpot moment for Pharmaceutical shareholders, but makes no medical sense at all. It’s the logical but absurd endpoint of a civilization run on bubble-money. If we print enough money from nothing to capture the agencies, buy off the media, and keep the politicians on a leash, we will get served a Plateful of Stupid. And so it is coming to pass… 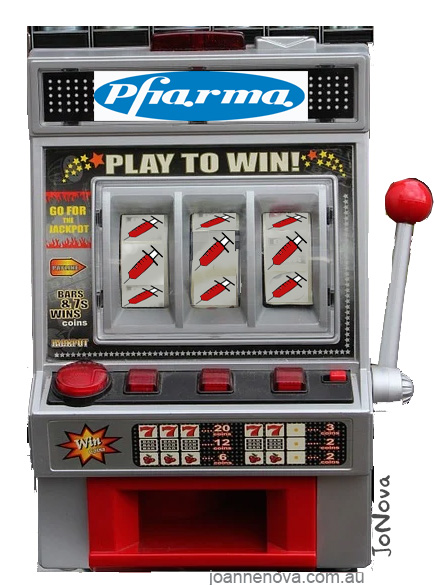 Watch Tucker’s face as the good Doctor Makary explains the situation. I mean really, in serious straight tones we’re saying that 50 million American children will be asked to take a vaccine that has only been tested on eight mice, for a disease that poses little known threat to them, with a vaccine that isn’t likely to help for long, and which has serious known side-effects, and, by the way, there’s no clinical data to assess. Big Pharma says they’ve done a study, but the data is so good it’s a secret.

This is an all new peak in Reductive Dystopia, where all roads lead to Big-Pharma profits. There has never been a vaccine added to the schedule without solid clinical data showing benefits. But no one is even pretending now.  As Makary says “Why even have an FDA?” Why have clinical trials?

As with all good drugs tested on eight mice, the US government has already bought 170 million doses. But it’s only money and they’re only children, right?

If the CDC adds it to the schedule, children may have to take it in order to go to school. It will depend on the States to decide. Judging by Twitter comments, it could be the best thing that ever happened for home-schooling.

People can submit comments for the CDC on this regulation at the moment (31,737 comments so far).

If 1 in 5,000 causes a severe adverse effect in Germany and there are 50 million school age children in the United States, that’s 10,000 children.  (And it may be worse — in Norway it was estimated that 1 in 1,000 people were hospitalized or suffered a “life changing” event.). Who knows? Don’t ask the mice, they’re dead.

Dr. Makary is a surgical oncologist specializing in pancreatic surgery and serves as chief of Islet Transplantation Surgery at the Johns Hopkins Hospital. Dr. Makary is a frequent medical commentator and has testified to congress on the need for patient-centeredness in health care. He has published over 200 scientific publications and speaks nationally and internationally on quality and safety in health care.