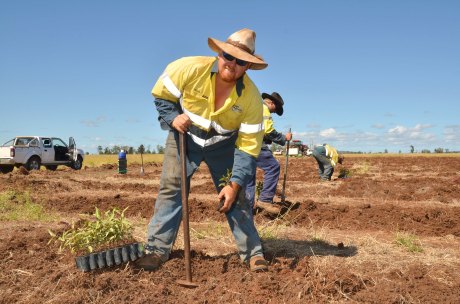 Like planting trees, the best time to build nuclear power plants was 20 years ago, the next best time is right now.

Before climate cultists started demonising coal-fired power, the world was awash in reliable and affordable electricity. Now, however, the crowd that berates us about human-generated carbon oxide gas are hellbent on destroying coal and even gas-fired plants, presumably to be ‘replaced’ by chaotically intermittent wind and solar.

Europe’s unfolding energy disaster has put paid to that notion, paving the way for a new nuclear power renaissance.

Small Modular Reactors – of the kind that have been powering ships and submarines since the 1950s – are the shortest route home. But that doesn’t mean that large-scale plants are off the menu. Far from it.

As Joseph Somsel explains, now that the demand for power on demand has never been more acute, the time to start building large-scale nuclear plants is right now.

Look up as you walk through the front doors of the Smithsonian Museum, and you’ll see William Shakespeare’s words chiseled into the stone above—“Past is Prologue.” High interest rates in the late 1970s and early 1980s meant the collapse of America’s ambitious nuclear construction program and the cancellation of many partially built plants. Of all power generation options, capital-intensive nuclear power is the most sensitive to interest rates. As interest in nuke plants picks up worldwide, will inflation-driven interest rate hikes strangle a new fleet in the birthing…again?

Today, how many countries wish they had more nuclear power plants up and running? Although Germany was in the process of shutting its last remaining 3 reactors, even its Green Party was willing to relent, a little, for this winter. The departing Boris Johnson lambasted his UK government for not building more reactors—almost as if he had actually spent political capital on their advocacy during his term as a member of Parliament or as prime minister—and “committing” for 14 more. The Philippines’ President Marcos Jr. is intent on restarting a mothballed reactor project from the time of Marcos Sr. The Biden Administration is traveling the planet selling (on low, convenient terms) American industry’s newest products—“Small Modular Reactors” or SMRs—and the US Department of Energy is predicting up to 1,000 new reactors by 2050.

Commercial nuclear power kicked off in earnest in the late 1960s. Browns Ferry in Tennessee and Oyster Creek in New Jersey were the first commercial plants that could justify their construction based on projected competitive electricity costs. An initial slew of orders followed, but that become a torrent after the Arab Oil Crisis of 1971. In 1970, burning oil fueled 35% of US electricity, much of it imported, and US oil production had just started to decline. Whether the then-new environmental laws had a part in dampening production or if it was truly “peak oil,” I’ll leave it to the reader.

By the early 1980s, we had knocked down our dependence on oil for electric production to 2% thanks to the new nuclear plants and to an expanded use of coal. We were now getting 20% of our electricity from splitting atoms. Our national security goal had been achieved!

But in the wake of this nuclear plant construction flurry came public and private utility companies with grossly weakened balance sheets, defaulted municipal bonds with angry bondholders, and a countryside littered with the empty husks of never-to-be-completed nuclear power plants.

What happened? The simple answer is interest rates. Here are the 30-year Treasury bond rates from 1977 to date. Corporate bonds such as those that utilities would use for financing their major projects (e.g., nuclear power plants) would match these trends but with a slight risk premium, i.e. an even higher interest rate. 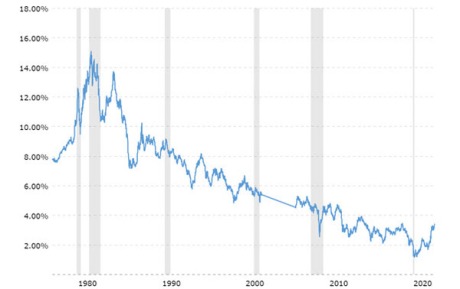 If you were trying to complete your unfinished nuke in 1980, someone (perhaps your local PUC or Wall Street) would tell you to stop—and stop they did. A few were able to finish and start paying themselves but too many just gave up. Marble Hill in Indiana had to be demolished with explosives—twice because it was soundly built. The Washington Public Power Supply System, a network of distribution utilities, was left with four partially constructed plants with only one (the Columbia Station on the Hanford Reservation) reaching commercial operation. Residential mortgages followed the same choke point as anyone who hoped to buy a home in the late 1970s, and early 1980s well remembers.

Just like your home mortgage rate greatly factors into your cost per night of living in your own home, so too does the cost of capital affect the cost of electricity. Nuclear plants are capital-intensive with low fuel costs. Paying off those high-interest rate bonds is the major factor in their electric production cost.

The problem for these plants when interest rates increase is that the cost of nuclear fuel is ridiculously low—50 cents per million-BTU in the reactor compared to $2 to 3 for coal. For example, Liquid Natural Gas delivered to Tokyo Bay to replace their post-Fukushima shut-in nukes has seen prices of $18 USD.

This means that the economics of nuclear power are more sensitive than other forms of generation to the cost of capital. On the other hand, once a nuclear plant is running, the costs of production are far more stable and far less subject to changes in fuel costs. Think of your housing costs—your fixed rate, stable, monthly mortgage payment probably dominates your total housing cost.

A good measure of a nuclear plant’s sensitivity to the cost of capital (here called “discount rate”) can be seen in this graph. Note that it starts at a zero percent discount where the costs are baselined and then shows how the cost of each source would increase with rising interest rates:

Here’s another way of looking at the same effect, this time on a by-country listing show how the levelized cost of electricity (“LCOE”) would spike from higher interest/discount rates.

So now the world has woken up (in a good way) and realized that everyone’s bad feelz about nuclear power may soon be replaced with the more concrete bad feelings of too hot or too cold and maybe even the ache of a hungry belly. There’s a nuclear construction boom ahead!

Yet, as in the late 1970s, rising interest rates will put the kibosh on new nukes. Given the Biden Administration’s profligate spending, inflation will be a long-term problem. Most other central banks are facing the same problem. For everyone—in the U.S. and abroad—there’s only one solution, which is to kill inflation with high interest rates. That will also kill a lot of the plans for new nuclear power plants too.

The history of the last 50-some years of nuclear power brings to mind two stories from the ancient Greeks. One is from Homer about Cassandra, the daughter of the king of Troy. She was cursed by Zeus with the ability to foretell future events, but no one would believe her. Like Cassandra herself, some of us have been telling the world for a long time that we need more nuclear power plants.

The other Greek story is from Aesop, the fable of the grasshopper and the ants. In our case, it’s better to finance and build nuclear power plants during the economic summer, when interest rates are low. If we wait for the need to become obvious, when winter has already come, it might be too late.

Let’s pray it is not too late.
American Thinker

The best time to start building was 20 years ago (or RIGHT NOW).