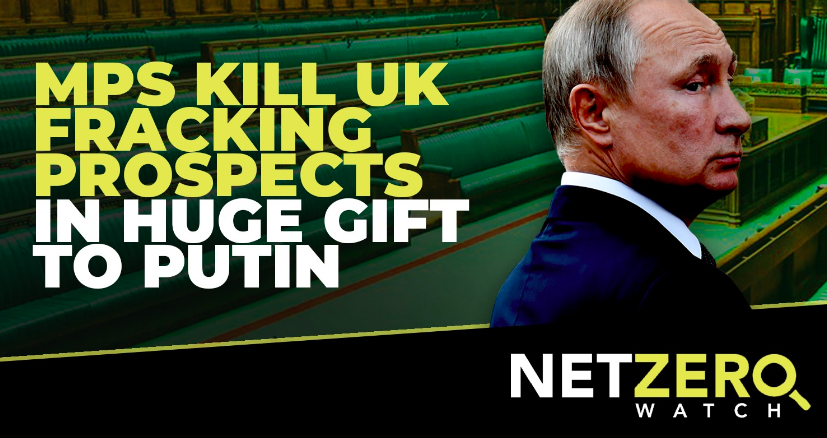 London, 20 October – Opposition and conservative rebel MPs have been accused of acting against the national interest by ringing the death knell for Britain’s shale gas prospects in the near to medium future.

While a majority of MPs last night voted against Labour’s motion to introduce a ban on fracking, it is now clear that no company will risk investing in the development of UK shale gas projects given that the next government is almost certain to pull the plug.

By killing the chances of exploiting Britain’s massive shale gas resources, anti-fracking MPs have caused significant economic damage while ensuring that the UK’s energy cost and supply crisis will get worse in coming years.

In the absence of Russian gas supplies, European countries will face an even worse energy crisis next winter after they have depleted gas they have stored for this winter, the International Energy Agency has warned.

While anti-fracking MPs don’t seem to realise the severity and existential threat of the energy crisis to households and businesses they have simply deferred the inevitable: There can be little doubt that at some point UK shale gas will have to be explored as the energy cost crisis threatens to devastate Britain’s economy and industry.

"The evident failure to embrace fracking is destroying the most promising chances of enhancing Britain’s energy security while driving up energy costs. MPs have been playing into the hands of Vladimir Putin as Britain will now be forced to rely more and more on costly gas imports rather than its massive shale resources.

If the Westminster bubble think the current economic and political crisis is bad, they are in for a shock next year when energy bills go through the roof and businesses go under."