When it comes to energy policy, practised ignorance is the new black. The debacle playing out in wind and solar-obsessed Europe ought to be enough to have policymakers around the world regroup and rethink their hitherto maniacal quest for the all-wind and sun ‘transition’.

But, in the land Downunder, not a bit of it. No, led by Labor’s Anthony Albanese – a man with all the commanding authority and political gravitas of Elmer Fudd – whose Energy Minister, Chris Bowen who has wrecked every portfolio he’s touched during his political career – the complete destruction of Australia’s once reliable, and wholly affordable, power supply is less than 12 months away.

Power prices have rocketed out of control; this summer routine power rationing (aka ‘demand management’) won’t be the symptom of ludicrous energy policy – it is THE POLICY. Mass blackouts are guaranteed, every time demand spikes and the sun sets and special calm weather sets in. Think breathless 42° C afternoons as the air-cons get cranked up and the sun slinks over the horizon.

If the situation wasn’t so critical to a once energy-rich nation, it’d be flat-out comical.

The Australian’s resident cynic The Mocker – who many believe to be its columnist, Chris Kenny – applies his own brand of gallows humour to what is a disaster in the making.

Energy Minister Chris Bowen is all wind, no answers on renewables
The Australian
The Mocker
20 October 2022

The more I think about Energy Minister Chris Bowen’s pre-election promise that the annual cost of household power would under a Labor government fall $275 by 2025 relative to 2021 prices, the more I think he was misquoted. To take one example, NSW residents are paying between $210 and $369 extra annually as of July 1. And this month we learned electricity prices could increase by at least 35 per cent in 2023.

Any day now Bowen will clarify his policy announcement of December 2021. “To be clear, I did not say that power bills would fall by $275,” you can imagine him saying. Allow me to write your speech, minister: “What I did say was that power bills under Labor would increase 275 per cent by 2025. And can I just say there is every indication this government will meet and even exceed that target.” For once people could be confident about his claims.

To say rising power prices are a major cause of anxiety is an understatement. An Ipsos poll last month revealed 57 per cent of those surveyed worried most about the cost of living. Doubtless that figure would be even higher if all the respondents reflected at length on Bowen’s ability to resolve the energy crisis, particularly given his political history and judgment.

Understandably, those of the current ministry who also served as cabinet ministers in the Rudd and Gillard governments tend not to advertise that fact. Few people would want to be associated with the turmoil, dysfunction, and ineptitude that characterised those years. And it would be unfair to hold that all the ministers in those administrations were similarly incompetent.

Nonetheless Bowen comes with much baggage. Between 2010-13 he held the immigration portfolio, a period in which Australia’s sea border existed only as a concept. “If I am obsessed about anything, it is breaking the people smugglers’ business model to ensure that we do not have people risking their lives on people-smugglers’ boats,” he told parliament in 2011.

Bowen was obsessed all right, but only with giving desperate undertakings he could not fulfil. “Nobody should doubt our resolve to break the people smugglers’ business model,” he declared that same year when announcing the so-called Malaysian Solution, a botched plan that would have seen Australia send 800 asylum-seekers to that country in exchange for 4000 boatpeople.

“We are on very strong legal grounds indeed,” Bowen told ABC Radio when refugee advocates challenged the lawfulness of the agreement. There was another empty assurance. Months later the full bench of the High Court found the government’s scheme was unlawful.

As for how Bowen fared overall in that portfolio, one need only point out that during the three calendar years he was the responsible minister, 781 people-smuggler vessels breached Australia’s border resulting in an influx of 48,911 asylum seekers.

Only weeks after Labor lost the 2013 election Bowen told ABC Lateline the Abbott government’s policy of turning back people-smuggler vessels was a threat to Indonesian sovereignty. “We’ve consistently warned that this was not only a dangerous policy on the high seas but also a policy which will endanger the bilateral relationship,” he said. So much for his resolve to put people smugglers out of business.

Still, his penchant for big promises was unaffected. He spent only 83 days as Treasurer, but nonetheless claimed in 2013, after only a month in the role, that the government was on track to record a budget surplus in 2016/17. Yet it was only when Labor was in opposition that Bowen’s unsuitability for that portfolio became apparent.

Appearing on Sky News in 2015 the then Shadow Treasurer was unable to nominate the tax-free threshold figure when asked by host Alan Jones. Later responding to a question in the same interview about the percentage of tax payable in the next bracket, Bowen incorrectly nominated 15 per cent (it was 19 per cent).

Few could forget his contemptuous dismissal during the 2019 election campaign of those who objected to Labor’s policy of cracking down on franking credit cash refunds. “If you don’t like our policies, don’t vote for us”, he said. And the electorate responded accordingly.

Observers correctly cited this as an example of his hubris but there was another aspect to his comments far more revealing. Bowen’s dismissiveness was a veneer for his inability to explain party policies he himself had drafted. If that was too complex for him, what chance does he have of realising his government’s 43 per cent emission reduction target by 2030?

I do not doubt that Australia should increase its capacity to provide renewable energy. What is disconcerting is that our political leaders regard that resource with admiration bordering on reverential – a delusional trait matched only by their hostility towards traditional energy sources and their failure to provide for an orderly transition.

Bowen’s incessant pitches about renewables being a “cheaper, cleaner and reliable energy” are not going to dispel the justified concerns about their reliability and storage capacity. Neither will a ministerial strategy reminiscent of a 1980s Amway rep flogging his products.

If Prime Minister Anthony Albanese is serious about convincing Australians to embrace renewables, then he may want to consider appointing an energy minister who does not have an excitable demeanour and a tendency to babble when asked probing questions. As for the incumbent, if only he could transmit to those huge turbines the attribute he possesses in abundance – a powerful and perpetual source of wind.
The Australian 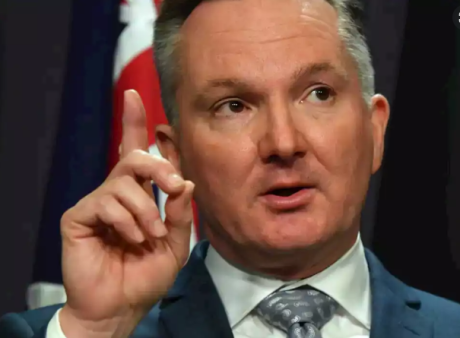 Correctamundo Chris – the only way for power prices, is up.