Mass civil unrest is odds-on in power starved Germany and Britain this winter, thanks to the so-called wind and solar ‘transition’.

With thousands likely to freeze to death, the collective sense of humour will soon evaporate, along with any remaining faith in the ability of wind and solar to deliver power, as and when it’s needed.

Everything about renewable energy policy is political; no one woke up 20 years ago thinking what a good idea would be to watch power prices triple and suffer power rationing every time the wind dropped and the sunset. Instead, it was a political ‘sell’ (aka lie) that the world would be an altogether happier place if only we were powered exclusively by sunshine and breezes.

Well, that didn’t pan out so well.

The political response to the disaster is all directed at preventing the proles from turning seething anger into outright revolt.

At the moment Europe is enjoying relative warmth – daytime temperatures in the low 20° C range. But, bitter black frosts and blizzards are only a matter of weeks away. Power demand will inevitably surge, wind and solar output will inevitably plummet and fail to meet it. Without Russian gas to fuel the fast-start up peaking plants that are used to fill those gaps, the Germans are in real strife.

In Germany loose talk about shutting coal-fired power plants and nuclear plants has given way to a new sense of pragmatism. Namely, that the mob will soon erupt, if the intelligentsia can’t keep the power on and prevent people from freezing in the dark.

Originally Germany planned to phase out all three by the end of this year.

Mr Scholz’s order overruled the Greens in his coalition, who wanted two plants kept on standby, to be used if needed.

The decision to phase it out was taken by former chancellor Angela Merkel after Japan’s Fukushima nuclear disaster in 2011.

But gas prices have soared since Russia’s invasion of Ukraine in February, which disrupted Russia’s huge oil and gas exports to the EU. In August Russia turned off the gas flowing to Germany via the Nord Stream 1 undersea pipeline.

After relying so heavily on Russian gas Germany is now scrambling to maintain sufficient reserves for the winter. The crisis has also prompted it to restart mothballed coal-fired power stations, though the plan is to phase out coal in the drive for green energy.

Last year Germany got 55% of its gas from Russia, but in the summer that dropped to 35% and it is declining further.

The Social Democrat (SPD) chancellor also called for ministries to present an “ambitious” law to boost energy efficiency and to put into law a phase-out of coal by 2030.

Last week climate activist Greta Thunberg said it was a “mistake” for Germany to press on with nuclear decommissioning while resorting to coal again.
BBC News 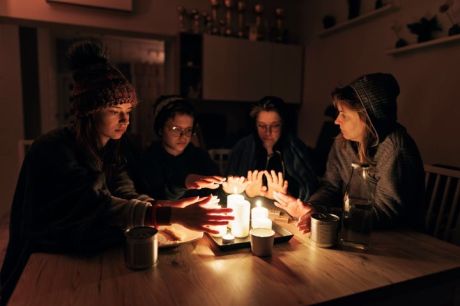