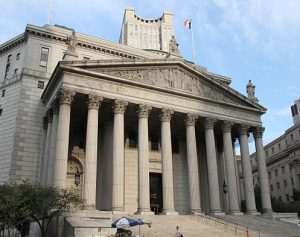 There were only 16 people involved in the lawsuit in New York, but they won this round categorically and it may set a precedent that affects thousands. The 16 sanitation workers who were sacked because they chose not to be vaccinated must be reinstated, and the Judge wants lost wages to be paid too:

Attorney Chad LaVeglia, who announced the verdict outside the Richmond County courthouse, said the mandate was now “null and void.”

This is not over yet. The decision, applies just to these 16 workers and will be appealed:

The ruling strikes down the mandate that saw over 2,000 city workers fired for not getting a COVID-19 vaccine. LaVeglia said the ruling extends to all public workers, including the New York fire department, the police department, and the Department of Corrections. However, the city disagreed and filed an appeal, saying it is keeping the mandate in place.

Justice Ralph Porzio’s decision is here. Apparently the legal case partly hinged on the lack of scientific evidence for the mandate, but mostly on the arbitrary and capricious nature of the ruling. While police, firefighters and cleaners had to obey, some athletes and celebrities did not.  The mandate applied to public sector workers from one date but not to private sector workers until several months later. And the NY ruling class gave exceptions out “arbitrarily” (presumably to anyone famous enough to protest and make the City of New York look bad).

“This is clearly an arbitrary and capricious action because we are dealing with identical unvaccinated people being treated differently by the same administrative agency.”

“Being vaccinated does not prevent an individual from contracting or transmitting Covid 19. As of the day of this decision, CDC guidelines regarding quarantine and isolation are the same for vaccinated and unvaccinated individuals. The Petitioners should not have been terminated for choosing not to protect themselves. We have learned through the course of the pandemic that the vaccine against Covid-19 is not absolute. Breakthrough cases occur, even for those who are been vaccinated and boosted.

Porzio declared the Commissioner of Heath and Mental Hygiene lacks the power to permanently exclude the workers from their workplace, and that it violates the separation of power doctrine, and the equal rights protection of the NY  Constitution.

How much these legal arguments apply in other jurisdictions is not clear, but hopefully this will spark a great many cases. Sadly the battle against these tyrannical mandates is far from over. I can see the appeal arguing that evidence showing how ineffective the vaccines are in October 2022 is not relevant to decisions made in 2021 with different variants and different data available at the time, but the point that the state granted exemptions unscientifically, and arbitrarily would still stand.

One day I hope there is a decision that the vaccines had significant and unknowable risks and that when there is risk, people should always have a choice.

h/t to B.nice and William Astley