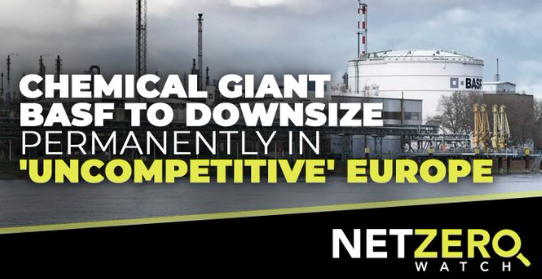 BASF, the world’s biggest chemicals company, says high energy costs make Europe increasingly uncompetitive
BASF has said it will have to downsize “permanently” in Europe, with high energy costs making the region increasingly uncompetitive.
The statement from the world’s largest chemicals group by revenue came after it opened the first part of its new €10bn plastics engineering facility in China a month ago, which it said would support growing demand in the country.
“The European chemical market has been growing only weakly for about a decade [and] the significant increase in natural gas and power prices over the course of this year is putting pressure on chemical value chains,” chief executive Martin Brudermüller said on Wednesday.
BASF, which produces products from basic petrochemicals to fertilisers and glues, spent €2.2bn more on natural gas at its European sites in the first nine months of 2022, compared with the same period last year.
Brudermüller said the European gas crisis, coupled with stricter industry regulations in the EU, was forcing the company to cut costs in the region “as quickly as possible and also permanently”.
The company announced two weeks ago that it would reduce costs by €1bn over the next two years, targeting mainly “non-production areas” such as IT, communications as well as research and development.
Brudermüller, who has previously warned that an embargo on Russian gas would plunge Germany into its biggest crisis since the second world war, said on Wednesday the cost cuts were necessary to “safeguard our medium and long-term competitiveness in Germany and Europe”.
The chief executive’s comments came as BASF reiterated its full-year sales forecast of between €86bn and €89bn, and earnings before exceptional items of €6.8bn to €7.2bn.
Sales grew 12 per cent to €21.9bn in the third quarter, compared with the same period last year, which the company said was mainly because of higher prices.
Profits before tax fell €538mn to €1.2bn, which the company said was partly because of lower earnings in its chemicals division, including rubber additives, salts used for solar panels and solvents for paints. The company also pointed to lower earnings from one of its existing plants in China.
Germany remains BASF’s most important market for revenues, accounting for 18 per cent of its sales in the year to date, compared with 14 per cent from China.

This follows on the heels of BMW’s decision to move production of the new electric Mini to China. No doubt many more businesses will follow suit.