Most of the world’s developing countries have backed a demand for wealthy nations to channel at least $1.3 trillion in climate finance to them annually starting in 2030, the opening salvo in one of the most contentious negotiating topics at the COP26 climate summit.
African nations and a group called the Like-Minded Developing Countries, which includes China, India and Indonesia, said in a document they submitted to the United Nations at the summit that half the money should go toward funding renewable energy in the developing world and half toward protecting these countries from the effects of global warming.
Developed nations have long pledged to help pay for developing nations to respond to climate change. That promise was crucial to sealing the Paris accord in 2015, when the U.S., Europe and other wealthy countries agreed to provide $100 billion a year from 2020 through 2025.
The $1.3 trillion target for mobilizing funds reflects the huge investments that will be needed after that to reach the climate targets of the Paris accord, the paper says.
“The post 2025 mobilization goal must reflect the ambition, progression and the collective agreement to stay well below 2 (degrees) Celsius and aspire to stay within the 1.5 degree Celsius temperature goal,” the paper says.
Developed nations didn’t hit that target in 2020, falling $20 billion short, and aren’t likely to meet it until 2023, climate negotiators said in a report in October. The shortfall has angered developing nations and complicated the talks in Glasgow.
Western officials say they aren’t ready to set a target for climate finance post-2025, given how difficult it has been for them to hit the $100 billion target. They will only begin the talks at COP26 on a goal for post-2025.
“We’re not feeling particularly capable now,” said one European official. “It’s really not the right time.”

According to the latest figures from OECD, climate finance hit £83 billion in 2020:

However earlier updates suggested that well over half of this was in the form of loans. Developing nations have said they want want mainly grants. In any event, they simply don’t have the capacity to pay back hundreds of billions in loans . 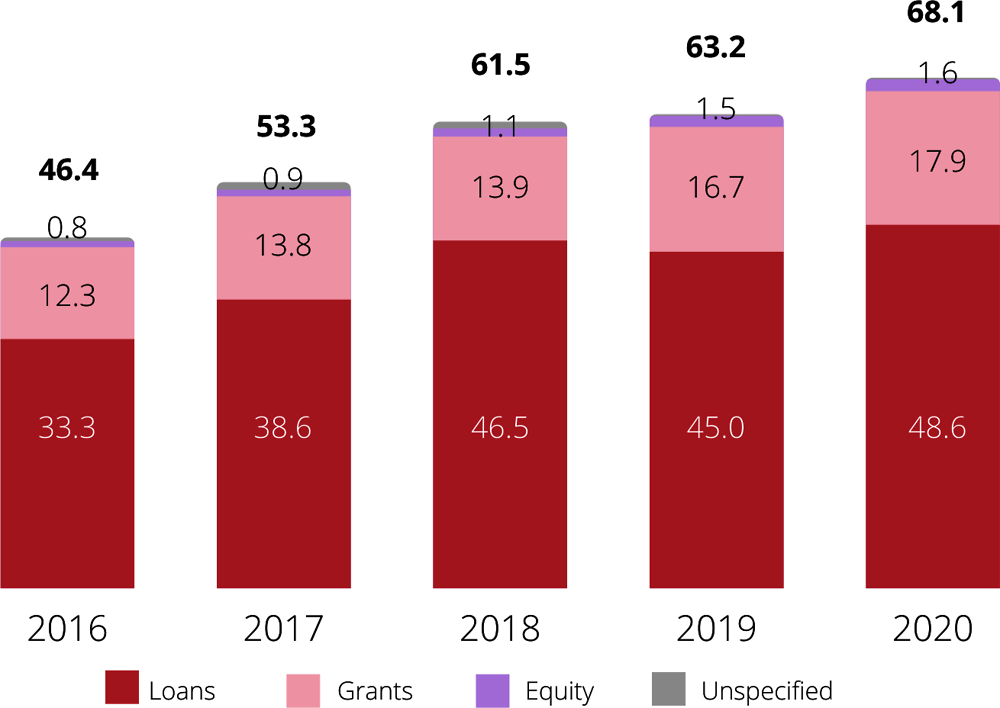 OECD projections show that climate finance will continue to struggle over $100 billion in the next few years, which makes the target of $1.3 trillion pie in the sky:

We also know that, as far as the UK is concerned, all of the climate grants paid out have simply been funded out of the ODA budget. In other words, the money is merely switched from other aid projects to climate ones. It is not new money.

I suspect that applies to most other countries too.

There is simply no way that existing overseas aid budgets could support these new demands.

To put the numbers into perspective, based on GDP, the UK’s share of $1.3 trillion would be about $70 billion.

One final footnote. Last year Joe Biden promised to increase US climate aid to $11.4 billion a year, but so far Congress has refused to approve this, and spend this year is only around $1 billion.

With the mid terms almost certain to lead to a GOP majority in the House, and probably in the Senate as well, it is likely that no more money will be approved during the rest of Biden’s term.

Without big money from the US, it is unlikely even the $100 billion target will be met.