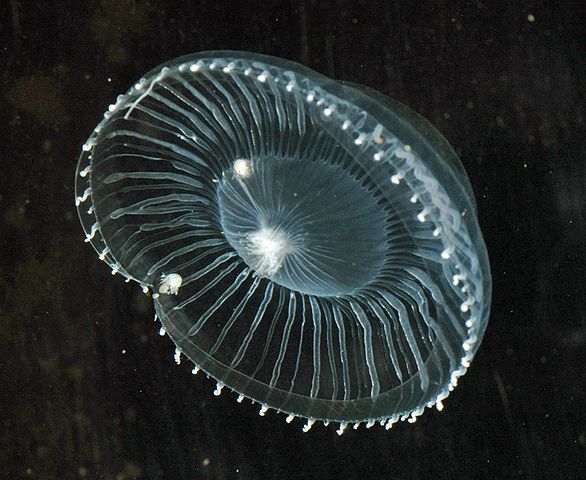 Lo behold, I give you the sign of doom. Bioluminescent jellyfish have traveled from the Pacific to the UK to warn of climate change.

We know this because citizen scientists have been tracking jellyfish for at least 20 years of the Holocene, if not the other 12,000 years, and they noticed things have not stayed exactly the same.

We don’t understand the underlying ocean gyrations, currents, jellyfish biology, or long term cycles of anything, but the team collected 1,315 sightings in the last year, which is a big number. Lordy, in waters surrounding 66 million people, it amounts to them counting three or four jellyfish every day.

Based on this we’d like your wallet, your pension fund, and the deeds to the houses your children haven’t bought yet.

Eight jellyfish species are normally seen around the UK and Ireland but this year 11 were spotted, with more uncommon visitors now visiting these waters

Bioluminescent crystal jellyfish made up 3% of total sightings: these animals are nearly completely transparent, but give off an amazing green-blue light under certain circumstances because of the fluorescent protein produced by their bodies. They are usually found in the Pacific Ocean and rarely visit UK waters.

The doom in this story is the state of science journalism. The Guardian churns out pagan whimsy and astrological prophesy on a daily basis, and calls it science — yet no publicly funded academic scientist has the guts to call this out.

No wonder the public thinks that “climate change is already here”.

As an aside, the crystal jelly (Aequorea victoria) has been called “the most influential bioluminescent marine organism.” Not for its ability to motivate millions of homo sapiens to live in the cold this winter, but for the green fluorescent protein (GFP) which  won Roger Tsien a Nobel Prize in 2008 and is now used in laboratories for medical research.

Sadly no one has any idea why the jellyfish want to glow.