The Marcellus formation lies under more than 60 percent of the state of Pennsylvania alone. Some geologists and petroleum engineers believe that the massive shale formation may hold as much as 500 to 700 trillion cubic feet of natural gas. This amount of natural gas in the Marcellus Shale could supply the entire east coast for the next 50 years according to some geologists.

With energy dominating the national discussion, look no further than Pennsylvania and New York as examples of failure and fortune. The Empire State might be looking to make a U-turn after a years-long trip into failed energy policy, while the Keystone State must decide if they will adopt the “America Last” energy policy currently favored in Washington, D.C.

The two states share a border of 225 miles, but when it comes to energy,
they might as well be on different planets.

It’s clear energy is on the ballot this midterm season. That’s bad news for fracking foes like Pennsylvania Senate Candidate John Fetterman. While he may be struggling to articulate his position du jour on fracking, it’s clear he’s borrowing from the Joe Biden play book: play a moderate in the campaign, return to radical roots once elected.

In 2014, then-Governor Andrew Cuomo imposed an outright ban on fracking in his state. The decision cost a loss of 400 jobs per year in some of the state’s counties and resulted in a “statically significant increase in unemployment.” By declaring a war on pipelines, some utilities in New York stopped “new residential, and commercial and industrial customer gas service connections.” New Yorkers are paying the 10th highest electric rates in the nation, and nearly 30 percent higher than their neighbors in Pennsylvania. 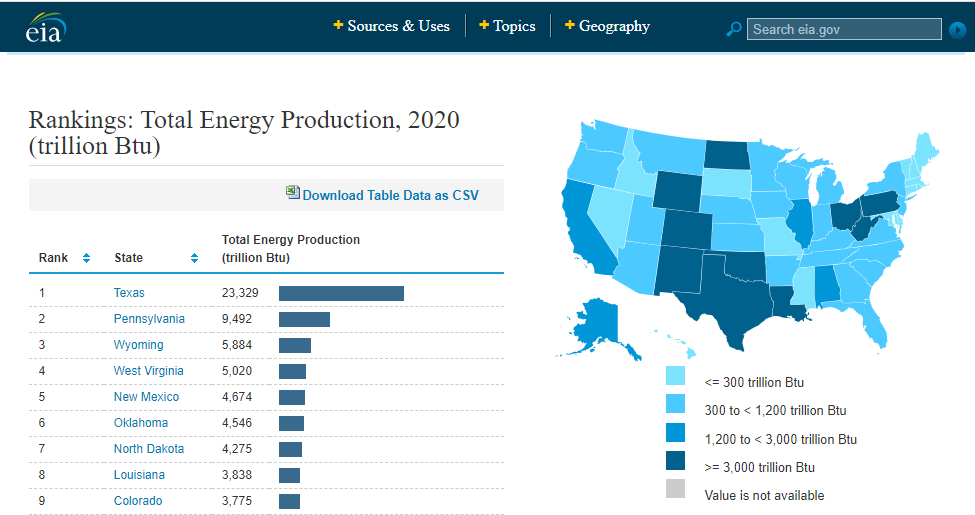 With no fracking ban in their state, Pennsylvanians are much better off. Today, the Commonwealth is second only to Texas when it comes to production of shale gas and in 2021 the state received over $235 million in impact fees from drillers. One university study found communities in Pennsylvania suffering from long-term economic stagnation are the beneficiaries of American energy development in their area.

Source of Primary Energy Consumption Data:  EIA   Notice that California and New York are top consumers of FF energy, principally oil and natural gas, but neither is a top producer, despite accessible resources.  Florida, Ohio and Illinois also share that predicament.

New York’s race for Governor is turning into a nail-biter, as residents of the state consider hiring the first Republican for the job in 16 years. Appointed Governor Kathy Hochul would continue Cuomo’s failed anti-fracking policy while Republican Lee Zeldin supports energy development in New York. The result? A Republican is surging in a massively blue state where people say their top issue is the economy. New Yorkers are suffering under the consequences of failed-fracking policy. Meanwhile in Pennsylvania, they have a radical in moderate’s clothing that thinks the New York failure is just fine.

The stakes are as high as they are clear: John Fetterman wants to end fracking and if elected, he’ll do all he can to do it. Sure, we all witnessed his bumbling response where he pinky-swears he now likes fracking, but he can’t bumble over the truth. He once referred to the industry as a “stain” on the state he is seeking to represent. Don’t forget that Joe Biden also did the fracking flip-flop as a candidate, only to take office and impose an “America Last” energy policy that’s delivered record gas prices, massive inflation and a weaker country on the world stage. Apparently, John Fetterman and Joe Biden view the disaster in New York as a winning game plan.

It failed for Andrew Cuomo, it’s failing for Joe Biden and if he’s elected, it will fail for John Fetterman, too. You might say that just like Communism, banning fracking has failed everywhere it been tried.