Well that was lucky. Early reports suggest the Chinese space junk from the launch four days ago has crashed in the Pacific 1,000 km short of Mexico. However, if I am reading those maps (below) correctly,  on this uncontrolled reentry it only missed Australia and New Zealand by half an hour, and just ten minutes later and it would have “landed” somewhere in Mexico or the Eastern US.

Despite what China says, this is not what the rest of the world does:

It was China’s latest round of celestial roulette involving a deliberate uncontrolled atmospheric re-entry. The rocket stage, by design, did not include a system to guide it into a specific spot on Earth, far away from people.

“The thing I want to point out about this is that we, the world, don’t deliberately launch things this big intending them to fall wherever,” Ted Muelhaupt, a consultant for the Aerospace Corporation, a nonprofit group largely financed by the U.S. government that performs research and analysis, said in a news conference on Wednesday. “We haven’t done that for 50 years.”

There’s a callous attitude of disregard here in these excuses:

However, Zhao Lijian, a foreign ministry spokesman, on Friday rejected the notion that China’s handling of the Long March 5B rockets represented anything unusual. “I would like to stress that China has always carried out activities in the peaceful use of outer space in accordance with international law and international practice — re-entry of the last stage of a rocket is an international practice,” he said.

Mr. Zhao added that the Long March 5B had been designed to pose less danger upon re-entry. The rocket “is designed with special technology; most of the components will burn up and be destroyed during the re-entry…

It broke no laws because there are no international laws on reentry, and this is not international practice, and if it had crashed in a populated area, it would have killed people.

Unfortunately, there are no international agreements in place to prevent these incidents from occurring again in the future, said Marlon Sorge, Executive Director for The Aerospace Corporation’s Center for Orbital and Reentry Debris Studies during a media briefing on Wednesday (Nov. 2). “And the reality is there aren’t any real laws, treaties, internationally that govern what you’re allowed to do in terms of reentry,” Sorge said

And past crashes did leave debris:

China, like always refuses to take responsibility for its falling rocket, instead claiming that it will burn up on re-entry. However, on three separate occasions, metal from their rockets has made impact on the Earth. Once, they managed to damage an entire village.

On the three previous launches by the Chinese space agency where they have used a similar rocket, back in 2020, 2021, and 2022, large chunks of debris damaged villages in the Republic of Cote d’Ivoire, fell into the Indian Ocean, and landed near villages in Borneo, respectively. Fortunately, no one has yet been injured by this falling debris.

According to Alex on twitter, “The Chinese #CZ5B rocket flew over Catalonia a while ago at a height of 148 km and a speed of more than 28,000 km/h.” Which makes it 140 km above most planes. Still, at some point, 23 ton objects moving at Mach 22 through your airspace will surely be breaking some laws.

Judging by reports, it went over northern Spain, past the UAE, over Western Australia and New Zealand and then crashed 1000 km short of Mexico.

Note the tick marks on the path show how far this travels in five minutes. It was a 35 minute flight from Spain to Australia. (I wish I’d known to look out the window as it went by). 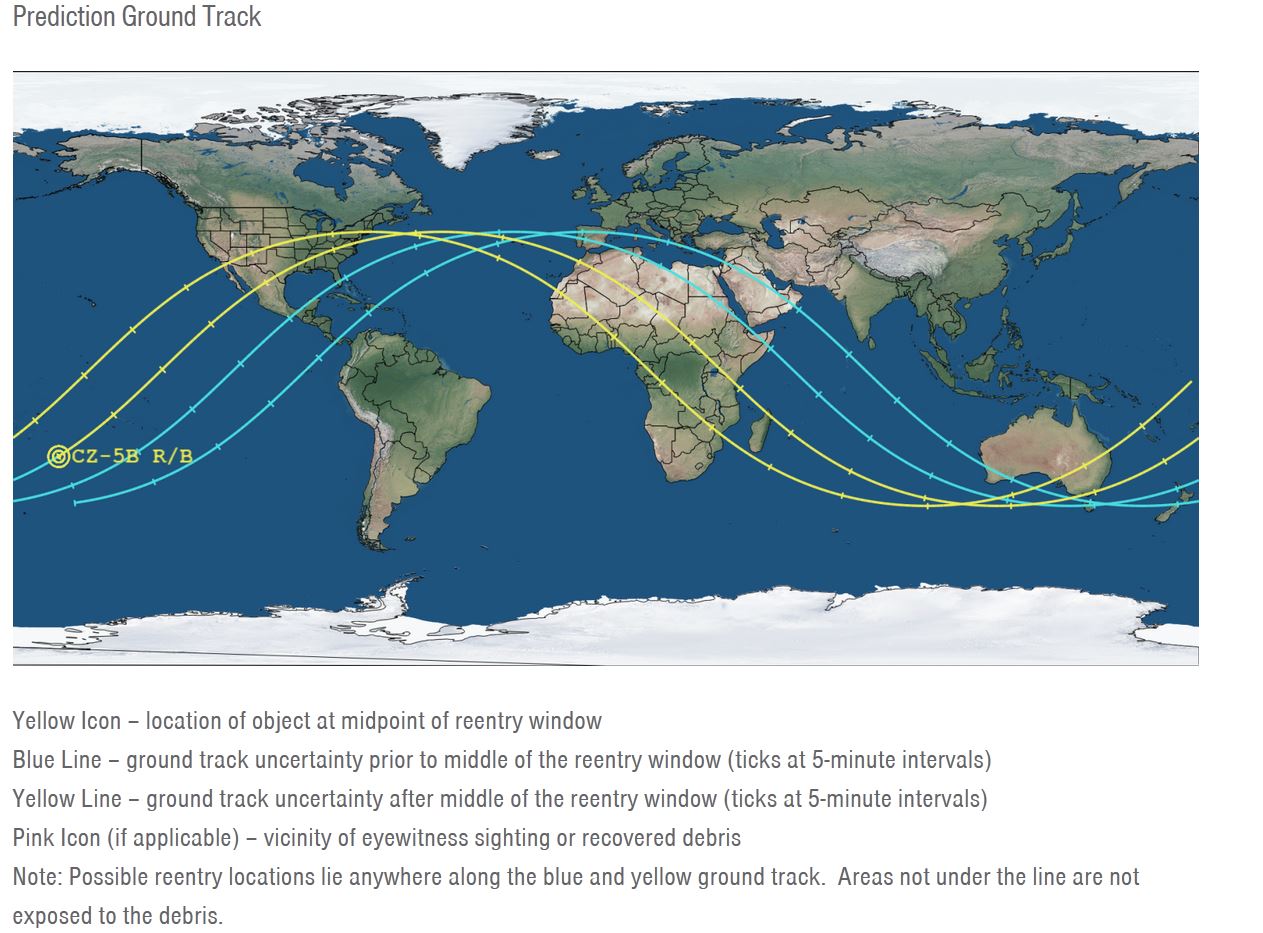 China does not know how to play diplomat, and is not even trying. It is treating the world like a trash can. Careless with rockets. Careless with viruses.

How much more would it have cost to add in the last stage burner to control that reentry?

Apparently China will try this again next year.

One thought on “Good Citizen China carelessly crashes 23 tons of space junk on Earth, gets lucky, but 300 flights in Spain delayed”