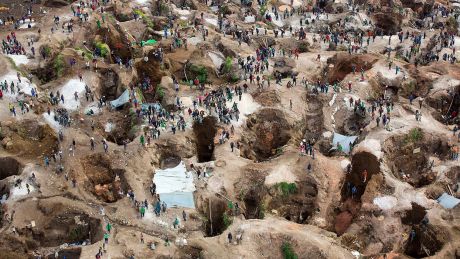 Rent-seekers and the MSM keep telling us the transition to an all-wind and sun-powered future is not only inevitable, it’s a cinch.

The power pricing and supply calamity playing out in renewables-obsessed Germany and Britain stands as a pretty fair counterpoint, to that nonsense.

Then, we’re told, it can all be done, provided it’s “done right”; which, in doublespeak, means more of precisely the same; even more $billions in subsidies gifted to crony capitalists, offering nothing but even more hopelessly intermittent wind and solar, in return.

Call it scaling up on an avoidable calamity, or doubling down on an inevitable disaster.

What’s overlooked in their starry-eyed and far-reaching promises about a ‘green’ Utopia, is the volume of mineral and other resources required to get there.

Every wind turbine and solar panel is the product of scarce resources, and not just the rare stuff mined by 9-year-olds in the Congo.

Liberals tell us that we are in the midst of a transition from fossil fuels to wind and solar energy. The reality is that no such transition is taking place, nor will it. This video by Professor Simon Michaux, who doesn’t take issue with global warming hype, explains one of several reasons why this is true: the mineral requirements of a wind- and solar-based energy system can’t possibly be met.

The quantity of metal required to make just one generation of renewable tech units to replace fossil fuels, is much larger than first thought. Current mining production of these metals is not even close to meeting demand. Current reported mineral reserves are also not enough in size. Most concerning is copper as one of the flagged shortfalls.

Before the video, here are a few screenshots from it. This one shows the principal metals needed for a wind and solar energy system, and compares those requirements with actual production of those commodities as of 2019, the last “normal” pre-covid year. Note that 189 years worth of copper production, 400 years of nickel production, 9,921 years of lithium production, 1,733 years of cobalt production, 29,113 years of germanium production, and so on, would be needed for the first 20 years of wind and solar installations. Then we would have to do it all over again. Talk about a lack of sustainability! 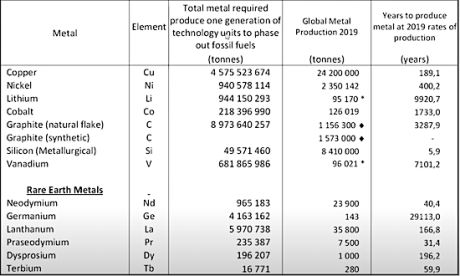 One last screen shot: the “green” energy vision would require between 6 and 7 times all the copper that has ever been mined through thousands of years of human history, for the first 20 years. That doesn’t count the current, growing demand for copper: 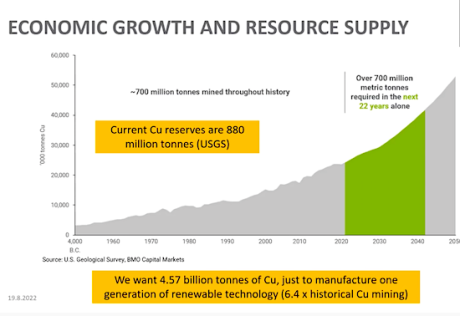 Another point that is often overlooked is that mining companies exploit the lowest-cost minerals first–those that are most plentiful and easiest to extract. If demand increases exponentially, then much more expensive sources will be brought into play. This means that the cost of basic minerals like copper, nickel, cobalt and so on will skyrocket as demand increases, perhaps by orders of magnitude. I don’t think anyone has even attempted to assess the full cost of a “green” energy system when those price increases are taken into account.

Here is the full video:

The bottom line is that no transition from fossil fuels to “green” energy sources is under way, nor will it occur, ever. The green dream is not just a folly but a fraud. Those who perpetrate it, like Al Gore, John Kerry, Barack Obama, Greta Thunberg, Alexandria Ocasio-Cortez and many others, are fraudsters who make Bernie Madoff look like Mother Teresa.
Powerline