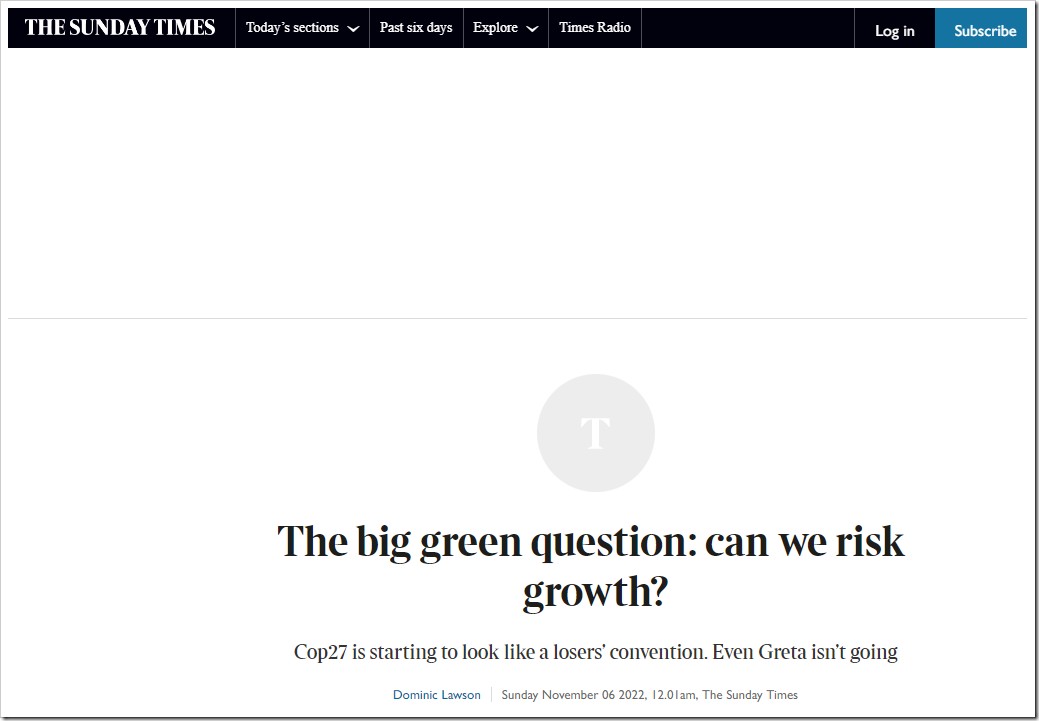 Just think of all the important world leaders that Rishi Sunak could persuade to join the UK in the great “net zero carbon” campaign when the British PM makes the trip this week that he originally said he didn’t have time for: to the Cop 27 climate conference in Sharm el-Sheikh, Egypt. The leaders of China and India, whose combined refusal at the Cop26 meeting in Glasgow to agree any date for abandoning coal use reduced Alok Sharma, the British president of the event, to tears; the leader of the world’s second-largest exporter of coal, Australia; the leader of Canada, where oil production has reached record levels of more than five million barrels a day; the leader of Russia, the planet’s biggest exporter of hydrocarbons.
Except not one of those countries’ leaders will be present. Admittedly President Putin is too busy terrorising and murdering Ukrainians to find time. But Messrs Xi, Modi, Albanese and Trudeau also have more pressing engagements in their diaries. A chap might be forgiven for wondering if they are less than fully committed to playing their part in the great cause, and don’t want to be publicly lectured on the matter by Greta Thunberg.
Though it turns out that the world’s most feted environmentalist isn’t attending either, having denounced the whole process as “greenwashing”. However, Ms Thunberg did show up last week in London to promote the latest publication bearing her name: The Climate Book. She took the opportunity to explain to her adoring audience that “the climate crisis has its roots in racist, oppressive extractivism”.
This will come as a bit of a blow to the European car industry, which under the orders of governments notionally committed to the same cause as Thunberg is switching from the internal combustion engine to power from batteries. Not that such power is inherently green: in China, for example, those electric cars will, in effect, be vehicles powered by coal. But if it’s “oppressive extractivism” you are bothered about, let me introduce you to the miners — many of them children — of the Democratic Republic of Congo, holder of the bulk of the world’s known reserves of cobalt, used in the batteries that power most electric vehicles.
In fairness to Thunberg, she doesn’t think we should be driving any sort of vehicle at all: her vision of life in accord with our moral duty “to the planet” is a kind of reversion to the Garden of Eden, or perhaps something akin to the way the Amish live. Funnily enough, she does somewhat resemble a member of that fundamentalist religious movement.
But she, at least, does not delude herself that it is possible to become more productive — the source of all economic progress and prosperity — while “going green”. At the heart of the transformation of mankind’s prospects over centuries is the growing efficiency with which energy is produced. What Thunberg denounced as “extractivism” is the very process that has done most to lift the world’s inhabitants out of abject poverty. The more of our resources required to generate energy, the more that progress is reversed.


So, for example, according to the late Professor Sir David MacKay, who was chief scientific adviser to the British government’s energy department, if you wanted onshore wind power to meet all our domestic energy requirements, it would be necessary to cover half the land mass of the British Isles with turbines.
Only, as he also pointed out, the laws of physics would stop this working even if any government were crazy enough to attempt it. Wind power is inherently unreliable, because it is unpredictably intermittent. And it cannot feasibly be stored. Therefore, the more a country is reliant on wind power, simultaneously the more it requires gas, as that is the most flexible backup fuel. In the past it would have been coal, which can be stored easily and at almost zero cost.
Now look at Germany, whose Energiewende policy trailblazed the switch from fossil fuels to wind power. On one day in 2019 wind power supplied almost 60 per cent of the country’s demand; on another day it could muster only 2.6 per cent. Cheap Russian gas seemed to be the ideal backup, but then … well, you know the rest. Result: the German government has just authorised the removal of a wind farm that sits over untapped coal reserves, which the country now desperately needs to keep its industry going (and voters warm). RWE, which owns both the wind farm and the coalmine, explained: “We realise this comes across as paradoxical. But that is how matters stand.”
Matters, however, are not standing but developing apace — and most unfavourably for Europe’s leading economy. America enjoys, through the development of vast reserves by the process known as “hydraulic fracturing”, gas prices about a fifth of those in Europe. So some of Germany’s industries have now gone west: literally. Ten days ago the country’s biggest chemicals company, BASF, said it would have to downsize “permanently” in Europe.
And what of our country, home to deliciously taxable onshore gas reserves that, even if only 10 per cent were recoverable, could provide 50 years of domestic demand at the present rate? For purely political reasons Rishi Sunak reversed Liz Truss’s decision to lift the moratorium on UK shale gas production, though last week a group of Conservative policymakers advocated lifting a similar block on new onshore wind. When you consider that to generate the same amount of energy over 20-25 years as a five-acre, ten-well shale gas site you would need a wind farm 725 times the size, you see just how politics conquers reason (and indeed the landscape) in UK energy strategy.
Our likely next government has set out a “green growth” plan hatched by its former leader — now shadow climate change secretary — Ed Miliband. He declared at the Labour Party conference six weeks ago that his plan would “make Britain the first country in the world to achieve the target of zero carbon power”. Not just “net zero”, but no carbon-based energy at all. Blackouts, here we come. Or, to put it another way, it’ll be green but there will be no growth. On the contrary.
No one seemed to pay attention to Gary Smith, leader of the GMB (the union whose large donation to party funds was cancelled out, in effect, by one from a renewable energy firm): “What’s your message to workers in the vital chemicals manufacturing sector who depend on imported fracked gas as feedstock for the industry?” He also urged Labour to stop bowing to the “bourgeois environmental lobby”.
Too late: that’s taken over policy across Europe. It’s only the rest of the world that understands what makes economies grow.