The misanthropes who glue themselves to roads and berate us about the ‘horrors’ of nuclear, coal and gas-fired power aren’t the sharpest tools in the shed, to be sure.

Living in a fact and consequence free zone, they’ve never stopped to think for a moment what life would be like without light, heat and power.

There are plenty of factors at play; an education system gutted of any rigourous content and filled with resentment-filled emotional claptrap; a mainstream media that simply parrots whatever crony capitalists tell them to write and say; cynical elites profiting from collective fear and ignorance generated by the press; and a political class who seem to think (with some justification) that the proles are simply too stupid to know or care.

But, leave hundreds of thousands freezing or boiling in the dark, and/or keep presenting them with power bills that they simply can’t afford, and the questions soon start.

And, when they do, it doesn’t take an enquiring mind long to work out that we’ve all been taken for suckers.

Gary Johns makes the point, below.

I received my Origin electricity account recently. No surprises – a big fat tariff – but the tagline “Good Energy” at the bottom of my account sent me spare.

Origin does not define “good” energy but everything on its website points to renewables, where the customer pays extra. And I thought renewables were cheaper? Anyway, let us assume Origin’s good energy refers to renewables; anything but fossil fuel, or nuclear energy.

Origin is not alone. AGL and Energy Australia spruik carbon offsets. Alinta spruiks wind, solar and lithium batteries. Renewable energy spruikers are obsessed with the (not altogether negative) impact of carbon dioxide on the Earth’s atmosphere. For this they are prepared to destroy everything else. This is not good.

All energy production has both a human and an environmental impact. Asserting that renewable energy is good (inevitable, low impact, cheap, feasible at scale, reliable and strategically sensible) and that – by implication – fossil fuels are bad is highly misleading.

The Australian Consumer & Competition Commission should pick up on this moral positioning. An energy corporation might say X per cent of its energy comes from renewables, but “good” is a whole new dimension.

If you believe renewables can replace all the good that fossil fuels do, and you think carbon dioxide emissions are the world’s major problem, and that the “great transition” to renewables is feasible and inevitable, you may conclude renewables are “good” energy.

But, to believe so, you must believe the two or three billion more people who will inhabit the world in the next few decades will do so without fossil fuels. That is far from inevitable or feasible.

An example of one of Energy Australia’s schemes is the “lighting swap out” in India, which replaces incandescent light globes with efficient ones that consume less energy. But what fuels the globes? The lowest-cost energy, fossil fuel, is the only source of energy that has lifted millions of people out of poverty in India and the rest of the developing world. In that context, changing light bulbs is not “good” energy.

So why does Australia deny the benefits of cheap, highly efficient energy that requires no backup, when the remainder of the non-Western world will swamp whatever the West “saves” in emissions by using renewables? This is strategically bad.

The delusions suffered by the renewables-at-any-price crowd seem to be underpinned by a collapse in the knowledge that humans have been altering the environment to make it less dangerous and more liveable for a very long time. The most effective way to do this has been using fossil fuels. Cheap, dense, abundant, scalable energy. Humans have mastered the environment by using fossil fuels.

It is not only developing countries that are energy-hungry. Our beloved digital phones, laptops and paraphernalia, as Mark Mills, a Manhattan Institute senior fellow who’s spent his career analysing global energy supply, notes, are “the most complex products ever produced at scale (and) require about 1000 times more energy to fabricate (measure for measure) than the products that dominated the 20th century”.

The renewables gambit ignores most of life. Coking coal is essential for steel production. Oil is essential for transport and all our plastics, chemicals and pharmaceuticals. Natural gas is an irreplaceable chemical feedstock for manufacturing and fertiliser.

But get this, renewables require materials that compete with other uses, and the cost of these inputs is bound to rise. Forget “cheap” renewable energy.

Electric cars are a joke. You pull into a station to refuel. What now takes five minutes could take hours unless you have access to a fast charger. And the huge extra cost of rolling out “refuelling” stations buys what you already had, a car with a full tank. Electric cars will eat the world. Forget “low impact” renewables.

My favourite group of renewables fantasists is Net Zero Australia. The group has produced various “pathways” to achieve net zero. For each, however, the demand for “exported energy” is held constant. This is a fallacy. Two to three billion more people will want fossil fuels. The pathways to net zero show a complete cessation of coal exports within a few years and a precipitous, falling-off-a-cliff decline in domestic emissions. The group states “any of these pathways are more or less plausible”, but the assumptions on exports and the abrupt cessation of emissions within a few years suggest none is.

Environmentalists assume the environment and its protection is the primary object of life. It is not. Humans are the primary object of life. What is more, human life has flourished precisely because of the use of fossil fuels, not despite it. Imagine eight billion people hunting and gathering. I’d give it three weeks before a thousand wars would break out – and destroy the environment in the process.

Alex Epstein, in his inestimable book, Fossil Future: Why Global Humans Flourishing Requires More Coal, Oil, and Natural Gas – Not Less, argues that to turn around the loss of confidence in the use of fossil fuels for human flourishing we should stop “treating human impact on climate as intrinsically immoral”.

As Epstein so eloquently argues, the history of human progress is precisely to have an impact on the environment to enable humans to flourish. That will remain the course for the world. The West alone wants to opt out.

Only in the context of human flourishing can a full evaluation be undertaken of what is good energy. Energy companies must stop making moral claims.
The Australian 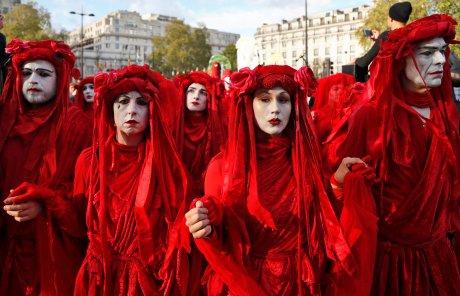