If only the US could afford to use paper and pens instead of machines, it would all have been finished.  Welcome to Dystopia-World, where the real battle is the struggle to get legal votes counted in the richest nation on Earth. The Arizona slow-roll debacle should have the people in the streets…

Meanwhile, the Democrats don’t want to face Donald Trump again, but they are not the only ones.  “The list of people lining up against Trump right now is simply an indicator of how large of a threat he remains to the globalist elite.” says Jenna Ellis.

Steven Mosher makes the case that it’s not Trump but the McLeadership of the Republicans who are to blame for any midterm results. Most of the Senate and House Republican campaigns were not run by Trump, but by the McLeaders — Mitch McConnell, Kevin McCarthy, and Ronna Romney McDaniel

Speaking of McConnell, there are shipping-lanes of connections between Mitch McConnell and China. Just in case anyone has forgotten what a deep swamp the core of US politics is, ponder that there is also one foreign communist government that would be especially happy if Trump doesn’t run in 2024. How much influence does it have over media moguls, tech giants and Mitch McConnell?

As the former president himself noted, smiling broadly, “I deserve full credit for every win, and no blame for any loss.” The mainstream media mocked him for saying this, but it is in fact true. Consider all the ways in which President Trump helped over the past 18 months to get Republican candidates over the finish line:

That was what Trump did. This is what the McLeaders did:

Republican senatorial candidates in battleground states were often outspent five- or 10-to-1 by their Democrat opponents this election cycle. The disparities are staggering:

But McConnell has not only failed to support Republican candidates in key Senate races, he has actively worked against them. The clearest evidence of betrayal comes from Alaska, where the local Republican Party in 2021 censured Senator Lisa Murkowski and instead endorsed Kelly Tsibaka as their candidate.

But it gets worse. In the closing months of the campaign, McConnell took money previously committed to the campaigns of Masters and Bolduc and sent some to his hand-picked Senate candidate in Colorado, Joe O’Dea. That is to say, he sacrificed two MAGA candidates in close races to a self-declared Anti-Trump Republican Establishment candidate who had no chance of winning.

Democrats prefer to face DeSantis rather than Trump in 2024

Ron was, far and away, the best funded of the Republican candidates. He raised some $200 million, with almost all coming in the form of large donations from the Republican establishment and Wall Street, far more than he needed for the governor’s race. He was further helped by the fact that the Democrats pulled a “McConnell” in the months before the election, pulling out their funding and effectively bankrupting the campaigns of their own candidates for governor and senator.

With its virtual celebration of DeSantis’ victory, the Left has made clear that it would much rather face DeSantis in 2024 than Donald Trump. The left-wing propaganda outfit formerly known as The New York Times, for example, has declared that the Florida governor is now the front-runner in 2024.

Trump is the big threat to the Uniparty rule

All this below about Mitch McConnell’s connection to China is legal, publicly available information, but that in itself, shocked me more than the naked potential conflict of interest did.  I wrote this in Jan 5th 2021 — just the day before the armless “insurrection” on Capitol Hill, a credit to Peter Schweizer’s research. If McConnell wasn’t liked by the media, every time he talked about Trump or China they would introduce him as the Senator who married into a Chinese Shipping Magnates family… 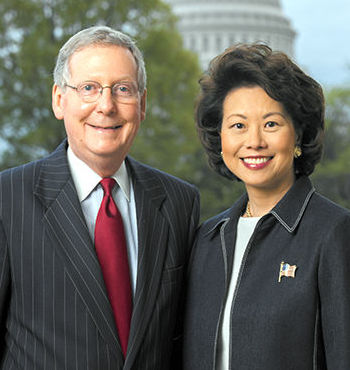 Mitch McConnell is a powerbroker of the US Senate, but he’s also a guy whose in-laws own a major shipping company that buys container ships from a Chinese Government company. The in-laws make money from carrying goods back and forward in deals with Chinese State Owned companies.

McConnell’s wife is a Chinese-American and also happens to be The Transportation Secretary of the US Government (or was when this was written!). Since Elaine Chao took up that job four years earlier, her fathers company has expanded rapidly and has added 40 percent more ships. Her father, James Chao, is a shipping magnate that gave his daughter and her husband McConnell a gift of at least $5 million in 2008. That’s the conservative estimate — it might have been worth as much as $25 million dollars. (Nice in-laws if you can get them.) The largess was legally disclosed. The net worth of the political couple went from $3m in 2004 to something between $9 and $36m by 2018.

The Chinese Ship building company is called CSSC Holdings. McConnell’s wife’s family is so close to it that both her father and her sister sit on the Board of the financial arm of this Chinese company they buy boats from. It’s odd, stacked on weird, wrapped up in long explanations. CSSC is not just a boat building company, it’s the Chinese government’s military contractor. Indeed, the letters CSSC stand for the China State Shipbuilding Corporation. Get it?

In another odd coincidence, just ten days after Donald Trump was elected in 2016, Elaine Chao’s sister Angela  was appointed to another board of Directors  —  the Communist Chinese government’s Bank of China.

McConnells wife Elaine Chao and her father-the-shipping-magnate are lauded in China and do interviews on Chinese TV in Chinese. They are promoted as  “lifting the status of Asian-Americans in America” often with little Dept of Transport flags in the background. This probably doesn’t do any harm to James Chao’s business.

Perhaps the oddest thing of all is that all this information came out in 2018. That’s when Peter Schweizer’s best selling book was published and the news was shared in  Politico the Wall St Journal, and Breitbart among other places. Yet, Mitch McConnell is still the man elected …

Kassam is editor of the National Pulse, worked within UKIP, and was adviser to Nigel Farage. Jenna Ellis was on Trump’s legal team. They talk about the Trump versus DeSantis stoush and the dark role of the media.

The election was two days ago. But Arizona has only counted 70% of its votes. I’m sure everything’s above board. I also believe that Jeffrey Epstein killed himself, carbon taxes can change the weather and the fifth Pfizer shot is the best Pfizer shot.

h/t Scott of the Pacific