The biggest blackout has hit South Australia since the statewide crash of 2016. It’s due to a weather calamity, but the renewables state is struggling to keep the frequency stable for a whole week without the rest of the national grid to lean on. This time they have the back up generation, but they’re struggling to stop the surges from solar and wind — there’s no where to dispose of excess electricity…

On Saturday afternoon a storm system blitzed out 423,000 lightning strikes and brought down some 500 lines, including the Heywood interconnector that joins South Australia (SA) to Victoria. That is out of action until Friday, so for a whole week the Star Renewables State of South Australia is on its own — Islanded from the national grid. The test is here, and right now at 6am they’re running on 80% fossil fuels and 18% wind.

The storm caused blackouts affecting 163,000 customers or roughly 18% of the state. Power was restored for most within hours, but there were still 35,000 properties without electricity on Monday, and some still out tonight (late Tuesday).

So the fragile grid teeters on. But the first thing the renewable energy star state had to do was dump their solar power because it threatened to push the system over. The highest risk moment they are worried about now is midday Thursday, because it looks like being a sunny day.

Too much solar power for grid stability?

At the time about 400MW of electricity was flowing out of SA into Victoria. But after the transmission tower fell over, there was suddenly an oversupply of energy in SA that couldn’t go anywhere and the frequency surged far outside the normal range.

Not only did SA Power Networks (SAPN) cut off all the panels that they could remotely control, but they even put out a facebook plea for South Australians to manually disconnect their own panels — something Paul McArdle of WattClarity doesn’t think he has ever seen before.

Indeed the idea has been floated that SAPN may be sending voltage spikes down the line specifically to trigger the automatic cut-off’s and trip the solar panels. It’s not clear if this is the case, but people are reporting voltage spikes of 255V or higher and lasting for four hours and McArdle asked the question.

Mark Jessop has noted that:  ‘SAPN appears to be increasing line voltages to cause PV inverters to trip out. Interesting decision, but I’m not sure what other options they would have (probably not enough systems which are remotely controllable yet).’

Below is a suspicious voltage jump on Monday, with Mark Jessop saying that “even though it was cloudy today I guess there was enough generation for @SAPowerNetworks to have to do the voltage step thing again…”

If it is deliberate it would be a third world way to control the grid. We know high voltages above 253 trip out solar panels, but they also damage other appliances too. If they need to create “demand” they could ask everyone to turn their air conditioners and ovens on at midday.

This has left some solar power owners feeling somewhat vexed and perplexed —  they’re in a blackout, and with a Tesla powerwall, yet they can’t use their solar panels at all and their neighbors are running off generators…

It’s a long thread on Facebook… (for anyone with a Tesla battery, apparently you can switch it to “off grid mode” in a blackout.)

And some people thought solar panels meant they were less dependent on the grid, but it turns out the grid controllers were just renting their roof space.

One of the lessons in this experience is what happens when the renewable states can’t dump their excess power in the state next door. When every state is in the same boat, and all running unreliable renewables, they will all still need complete back up and the ability to switch off your solar panels.

This week,  frequency is everything in South Australia

South Australia struggles to keep the frequency stable after they are disconnected with the bigger and more stable Australian grid.

Thanks to Dan Lee at WattClarity: 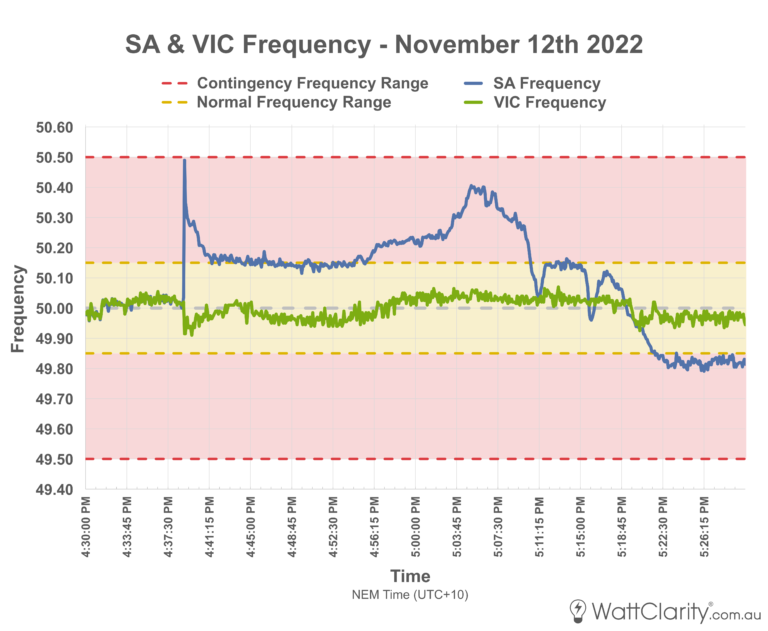 South Australia was really struggling to control the frequency of the grid after the Islanding. 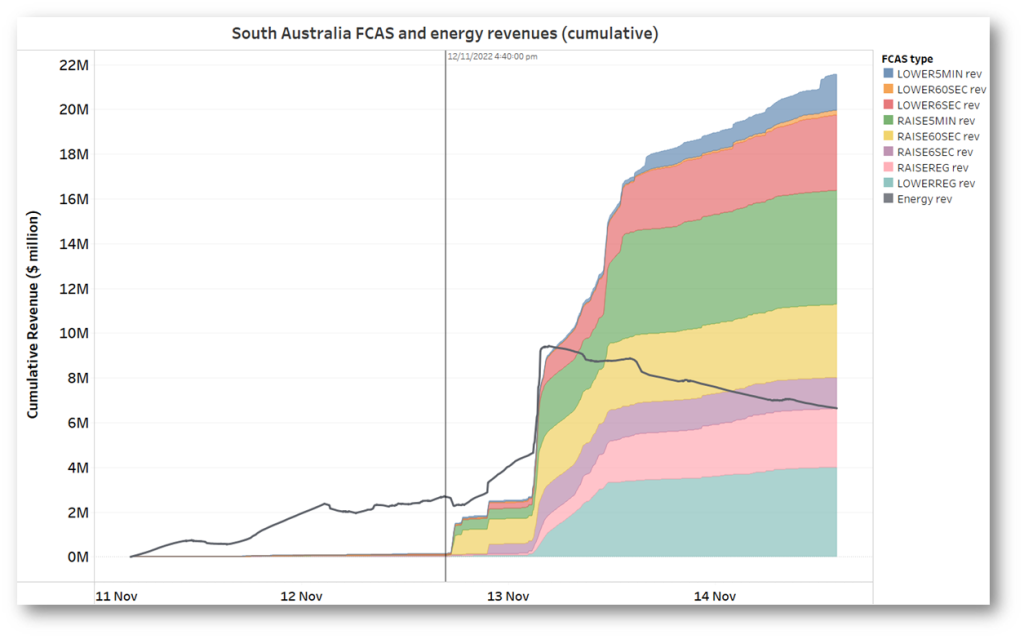 Keeping the grid stable is earning good money for some. In the chart below the batteries like Hornsdale or Dalrymple are earning big dollars but not producing much in the way of megawatts. The gas generators are obvious because they are… generating. So wholesale prices for electricity haven’t gone through the roof this week in SA (much) but gas generators are making money in FCAS payments to keep the grid stable. That’s a nice $400 – $900 /MWh for them. Not too shabby. But a killer for the customers, and a hopeless long term solution.

But clearly South Australia isn’t remotely ready to cut the cord and go 100% renewable either.

Why the storm was so intense.