Despite achieving nothing but a holiday junket for 45,000 people, COP27 has managed to eek out the usual PR “win” in the grand media theater. They have a document they call a historic breakthrough which is actually nothing but a wish list for future UN wet dreams. It’s just a “roadmap for future decision-making” meaning, they haven’t made any decisions yet. They can’t say who’ll pay, or who’ll get the money, or how big the money will be, or exactly what it will be for.  But they can say they will meet again to figure it out.

Take it from Reuters:

“…the text of the agreement leaves open a number of crucial details to be worked out next year and beyond, including who would contribute to the fund and who would benefit.”

But there is no agreement yet over what should count as “loss and damage” caused by climate change – which could include damaged infrastructure and property, as well as harder-to-value natural ecosystems or cultural assets.

A report by 55 vulnerable countries estimated their combined climate-linked losses over the last two decades totalled $525 billion, or 20% of their collective GDP. Some research suggests that by 2030 such losses could reach $580 billion per year.

So even with all the exaggeration — with fifty five countries and twenty years of back-claims — the tally amounts to just 26 million per year in damages?

If it ever amounts to anything, nations of the West will just shift money from “foreign aid” baskets and funnel it through the UN to make it even less effective for the world’s poor. It will fatten up corruptocrats in third world enclaves and provide bread and honey for UN hollowmen and junketeers. There will be no incentive for the tin pot nations to build sea-walls, stop erosion or do hazard reduction to stop fires — because the worse the catastrophe is, the more money they can ask for in “losses”. So third world governments will be less accountable for their own incompetence as they blame-shift to the West, but they’ll get more dependent on the UN as sugar-daddy.

All in all, it will be a win for creeping communism but a loss for the everyone else. It’s another road to  One World Government.

Thank the West for releasing all the CO2. Consider it a gift…

The West doesn’t need to pay the world for imaginary “climate damage”. CO2 is a net benefit worth billions. It has increased crop yields, and plant growth and helped feed the world, it has thickened the forests, and reduced desertification. There are 18 million more square kilometers of greenery in the world. If the temperatures do increase two degrees, and CO2 hits 700ppm, corn is estimated to grow 25% faster and soy beans will boom by 31%.

Nearly nine out of ten islands of 700 Pacific and Indian ocean are growing more than shrinking, and the 11% that are shrinking are so small they have no human inhabitants. Zero. So let’s pay nothing to no one for sea level rises, but send a bill to the islands with extra real estate?

What has the West ever done for you?

The third world seems happy with cars, trucks, electricity, antibiotics, gas and planes. They like their fertilizer, poly-cotton, concrete, sealed roads and smart phones.  The game of retrospective injuries and awards can be played by both sides.

“There is no need to pay reparations. Our leadership of the industrial revolution brought prosperity to the world and led to increased life expectancy and better living conditions.”

As CO2 grew, the population of Africa expanded from 155 million one hundred years ago to 1,500 million now. A billion more African lives… 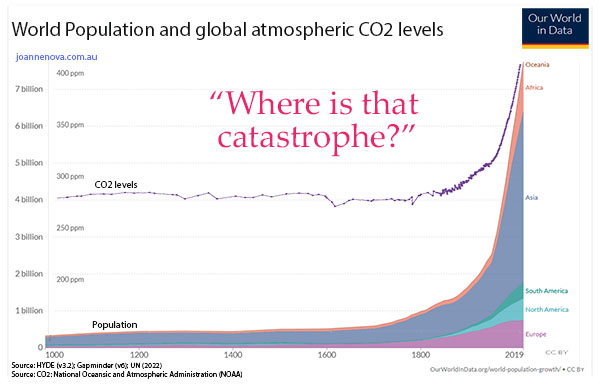 CO2 is a net benefit to life on Earth, and so is the West.

*If the top 39 countries* on the Human Development Index pay up, the cost is split among 1.1 billion people.  Why stop at 39 countries? The 40th nation was Saudi Arabia, and I’m guessing they won’t pay a cent.