Totalitarian busybodies want to track your car, and expect you to ask permission to travel, not just overseas, but to the suburb next door. These are the same people flying in private jets to two week long UN junkets.

The 15 Minute City is a UN and WEF plan. You will be tracked and trapped in your suburb and happy about it. 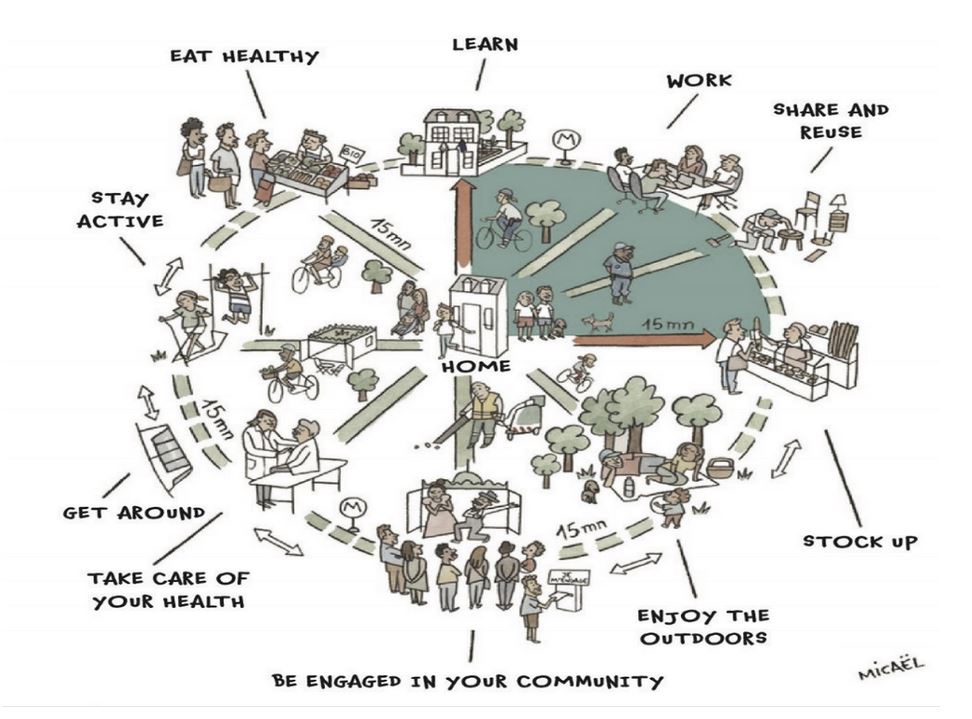 From the WEF and just for you.

It’s hard to believe but Oxford City Council is taking the benign idea of solving long commutes and with one hop, skip and a jump they’ve arrived at malignant tyranny. If you don’t like the idea of walking to work, and “saving the planet”, they will force you to catch that bus. But the unintended consequences are vast. You may have to move house, get a new job or get a divorce. You think you have the right to visit your children? Only with permission. Your whole lifestyle is up for grabs.

What about people who live on the edge of a zone? Will the stupidity of artificial borders mean people quit gyms or shops five minutes away which are in the wrong zone and drive 20 minutes instead?  Emissions may rise…

It’s the social credit scheme that starts with your car.

Residents will be confined to their local neighbourhood and have to ask permission to leave it all to ‘save the planet’.

Oxfordshire County Council yesterday approved plans to lock residents into one of six zones to ‘save the planet’ from global warming. The latest stage in the ’15 minute city’ agenda is to place electronic gates on key roads in and out of the city, confining residents to their own neighbourhoods.

Under the new scheme if residents want to leave their zone they will need permission from the Council who gets to decide who is worthy of freedom and who isn’t. Under the new scheme residents will be allowed to leave their zone a maximum of 100 days per year, but in order to even gain this every resident will have to register their car details with the council who will then track their movements via smart cameras round the city.

What if your wife has a job in one zone, your son goes to uni in another, and your work or sports club with lifelong friends is in a third? Should you sell the family home, and send the kids to boarding school?

On the surface, these 15-minute neigbourhoods might sound pleasant and convenient. But there is a coercive edge. The council plans to cut car use and traffic congestion by placing strict rules on car journeys. Under the new proposals, if any of Oxford’s 150,000 residents drives outside of their designated district more than 100 days a year, he or she could be fined £70.

The concept of the 15-minute city was born with ‘C40’. Chaired today by London mayor Sadiq Khan, C40 calls itself a ‘network of mayors of nearly 100 world-leading cities collaborating to deliver the urgent action needed right now to confront the climate crisis’.

The BBC thinks it’s totally normal for the government to decide who your friends are. Apparently lockdowns in Paris were great social moments. Who knew?

.. for Fraioli, the two-month lockdown that began on 17 March – confining her to a 1km radius of her home – gave her a nuanced, enriching view of her neighbourhood. “I discovered it’s possible to feel like you’re in a small village in Paris,” she says. “To get to know your neighbours, to maintain good links with shopkeepers, to favour local craftsmen and shops over large supermarkets. I even joined a citizens’ movement where people prepare food baskets for homeless people. I thought I would have a hard time living the lockdown, but I was perfectly at home, in a quiet place.”

I don’t seem to recall “getting to know neighbours” as being part of any lockdown anywhere?

And don’t think buying two cars will get your 200 trips. Each household gets 100 no matter how many cars they own.

Climate change is just the excuse to get the plebs out of the planes and off the roads. The special chosen ones at university or in the executive service will be given a free pass.

And yes, this is not just Oxford, but Brisbane, Melbourne, Barcelona, Paris, Portland and Buenos Aires.  Spreading like cancer.

28 thoughts on “Oxford 2024: Climate lockdowns start — You will be tracked and trapped in your suburb and happy about it.”