I’ve a couple of points to add to Susan Crockford’s earlier excellent take down of that BBC article:

In Churchill’s frozen Hudson Bay, bears use the sea-ice as a platform to hunt seals.

But the sea-ice-free season in this part of the Canadian Arctic is lengthening, leaving bears unable to hunt for long periods.

But as the polar bear becomes an icon of climate change, the bears’ plight in Churchill embodies the inextricable link between preserving the natural world and fighting global warming. The polar-bear capital of the world is simply getting too warm for polar bears.

"Looking over the last couple of decades, it forms later and later and it breaks up earlier and earlier in spring," Dr Flavio Lehner, of conservation charity PBI, says.

"So this season in between – where the bears are on land and can’t take advantage of those hunting opportunities – that’s is getting longer and longer, with warming."

The BBC could not be any clearer – Churchill is getting warmer and the Hudson Bay sea ice is melting more and more every year.

The facts don’t support that claim:

The Canadian Ice Service monitor ice coverage on a daily basis, and their data for Hudson Bay is below. Sea ice during November, when the polar bears usually return to the ice, has been stable now for three decades. Prior to that there was a sharp decline, coinciding with the switch of the AMO to its warm phase. Undoubtedly the Pinatubo eruption in 1991 also was a factor in the high ice extents in 1992 and 1993. It is therefore arguable that the ice has been stable since the late 1980s. 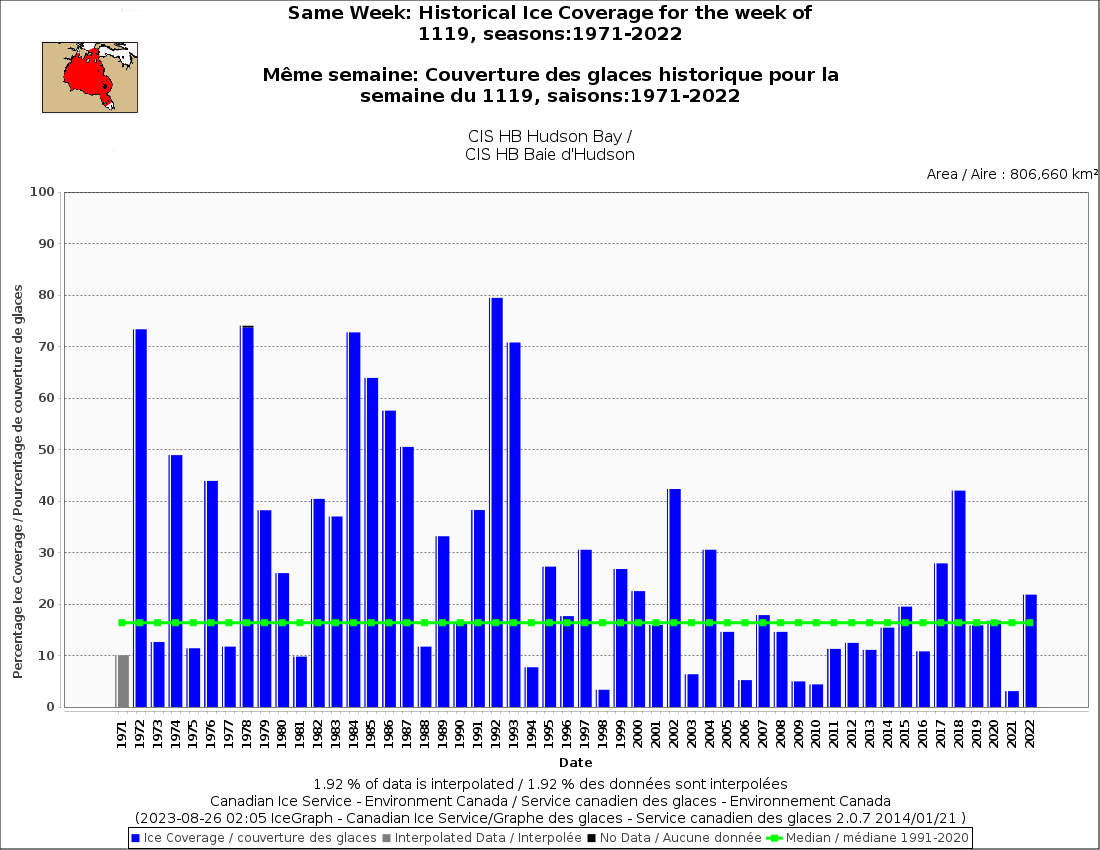 We see a similar picture when we look at ice in July, when the bears usually come ashore. 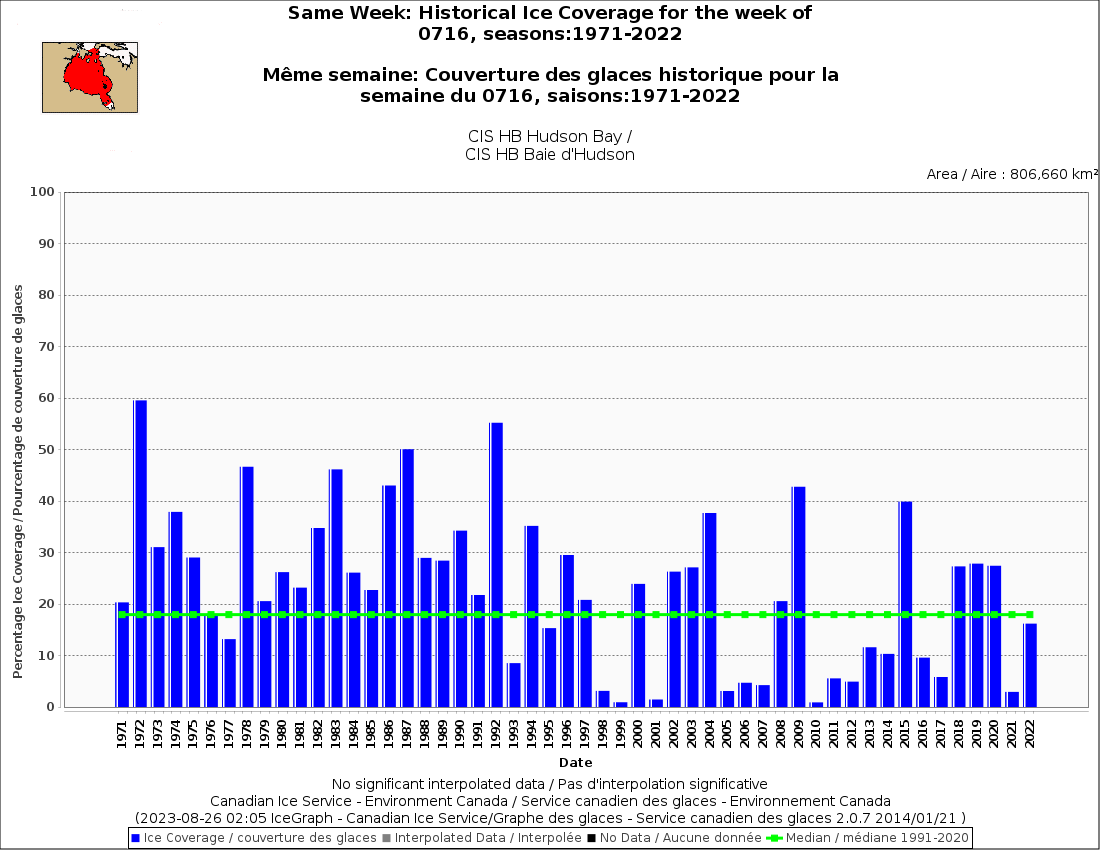 By August the ice is gone completely, regardless of the July extent:

The BBC also reported this claim:

"Back in the 1980s, polar bears would only spend a couple of weeks onshore each summer," USGS research wildlife biologist Dr Karyn Rode says.

Heaven knows where Dr Rode got that load of old drivel from, as even as late as mid-October there has never been no ice, with the exception of a few odd years: 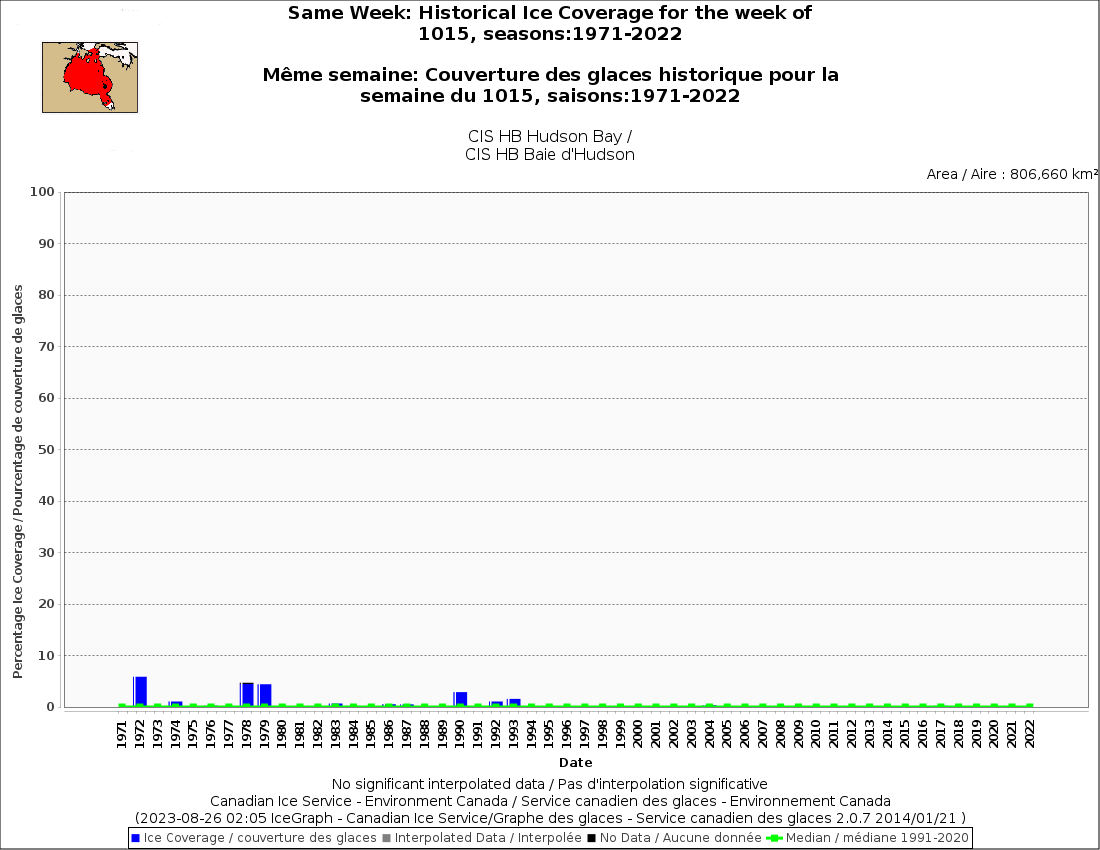 As the actual experts in Churchill know, the bears have always come ashore in July and stayed till November:

The most spectacular and beloved residents of Hudson Bay are polar bears. The largest land carnivores on earth, polar bears leave the sea ice and arrive on the Hudson Bay coastline in July, where they roam and rest along the coast or prowl around our Lodges until the ice forms again in November. The bears then venture back out on to the ice in search of seals, their primary food source and favourite meal.

Indeed their comment about “roam and rest” is highly relevant. Polar bears don’t really need to eat during their time ashore, as they have stored up enough energy in spring. But their time ashore is a welcome opportunity to rest, effectively chill out!