A study in the journal PLOS Biology found that 65% of Antarctica’s plant and animal species, including penguins, will likely disappear by the end of the century if the world does not do something to decrease fossil fuel emissions.

The study also showed that the current conservation efforts in Antarctica are not working on the rapidly changing continent.

Researchers concluded that implementing an extra layer of cost-effective strategies, which they lay out in the study, could save up to 84% of Antarctica’s vulnerable biodiversity.

"Antarctica is not really contributing to climate change; there’s not a large-scale number of people living there, so the greatest threat to the continent is coming from outside the continent," Jasmine Lee, lead author of the study, told CNN.

"We really need global action on climate change, as well as some more local and regional conservation efforts, to give Antarctic species the best chance of surviving into the future."

Thursday’s study shows that disappearing sea ice will threaten emperor and Adelie penguins that rely on ice from April through December.

"These iconic species, like emperor penguins and Adélie penguins, are at risk and it’s really sad to think that Antarctica is one of the last great wildernesses on the planet and human impacts are being seen and felt there," Lee said.

"It’s just incredibly sad to think that we could drive those kinds of species towards extinction."

Lee said that more action is needed to save one of Earth’s vast, pristine biomes.

"This is just the tip of the iceberg," Lee said.

"We’re at this huge turning point now not just for Antarctica, but globally, when it comes to climate. We’ve got the opportunity to stop it and if we don’t do something now, then the impacts are going to be much, much worse than what they could be."

There’s only one slight problem – the Southern Polar regions have not got any warmer since 1980: 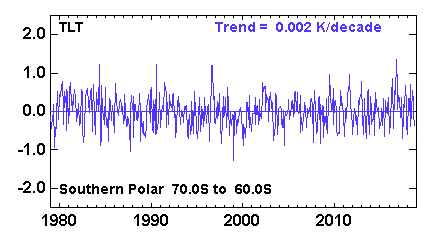