The hydrogen lobby really is out in force today! 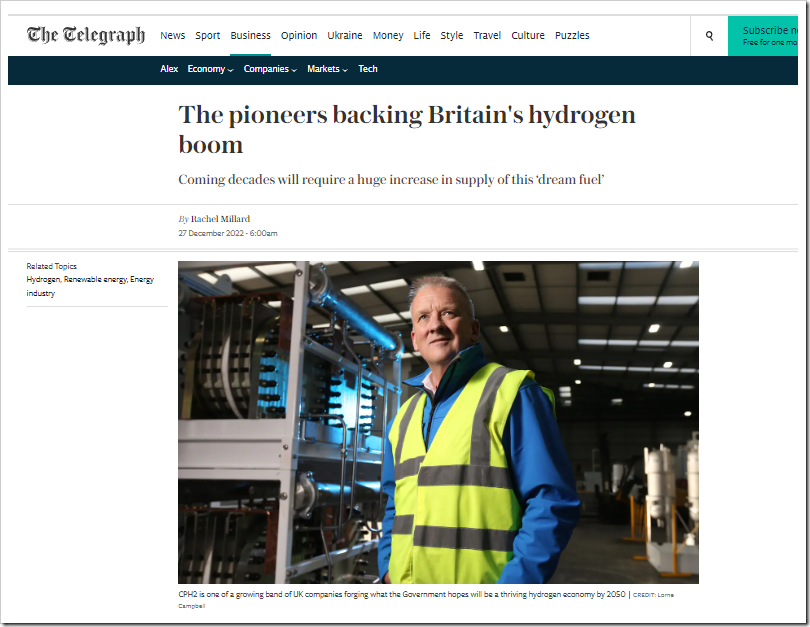 In a vast, chilly warehouse in Doncaster, one piece of machinery in particular is consuming Jon Duffy’s attention.

The white cryostat tank parked in the middle of the room is key to his company’s new process to make hydrogen, the gas at the centre of the global push to cut carbon emissions. Not all is running smoothly, however.

Tests have revealed “a slight issue” regulating flow and pressure in the heat exchanger on top of the cryostat, potentially making it more difficult to separate hydrogen and oxygen mixed gases after electrolysis.

Fixing the hurdle has caused delays in getting Clean Power Hydrogen’s “plug and play” production units out to customers. One company, Octopus Hydrogen, cancelled its first order in November.

It’s not only its customers who will be watching its progress closely. AIM-listed CPH2 is one of a growing band of UK companies forging what the UK Government hopes will be a thriving hydrogen economy by 2050.

Politicians around the world hope the gas will one day be used to fuel everything from industrial trucks to steel production and potentially boilers in people’s homes. For many, hydrogen is considered a dream fuel. Unlike burning methane gas and coal, burning hydrogen does not emit carbon dioxide.

It is currently a niche product used in oil refining and chemical production, however, and is mostly produced by splitting methane gas into carbon dioxide and hydrogen, leaving tonnes of carbon dioxide in its wake.

While the extent to which it will be used is contested, with UK MPs stressing recently it is “not a panacea”, there is little doubt that coming decades will require a huge increase in supply of hydrogen produced without emitting carbon dioxide.

This can be done by splitting water using electrolysis, or by capturing the emissions left behind when producing it from natural gas. It will also require a huge increase in demand for the product, with steel mills, boilers and pipes needing an overhaul so they can make use of the lighter, combustible gas.

Vast numbers of jobs, taxes and expertise are likely to be gained or lost depending on how countries respond to this potential energy shift. How is the UK, keen not to repeat past mistakes and miss out on a new technology boom, positioned to capitalise on hydrogen?

The rest of the article is no more than lobbying from businesses who are hoping to profit from the billions of government subsidies on the table.

According to the Telegraph, we might be getting more than a third of our energy from hydrogen by 2050: 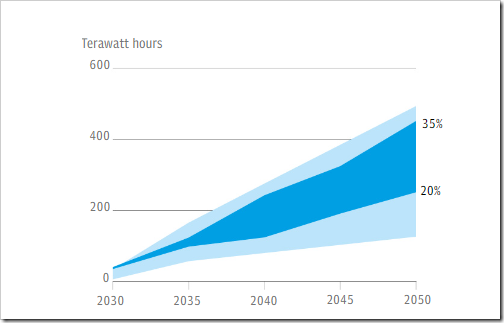 But amidst all of the talk of “dream fuel”, the Telegraph have not bothered to ask just where all of the energy will come from to make hydrogen!

The government’s projections are also extremely vague on the matter:

But what is clear is that there is no practical way to get most of it from electrolysis. Even the 135 TWh projected would need about 50GW of offshore wind power dedicated to it, which is more than we are planning to build by 2035. These wind farms  will of course need to be totally demolished and rebuilt every 20 years or so.

The impracticability of all of this is why the BEIS are banking on steam reforming with carbon capture for most of the needs. But this needs natural gas, and lots of it; indeed much more than we would need if we just burnt the stuff in the first place!

The Telegraph also forgets to question just how we  will be able to store the enormous quantities of hydrogen, which we will need to draw down in winter.

By coincidence SSE were bragging about their new hydrogen cavern last week: 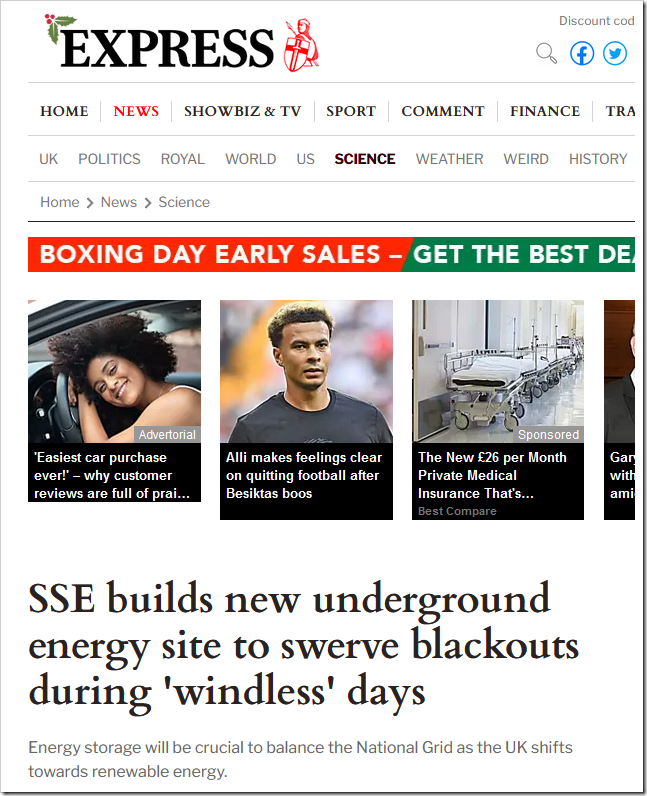 Energy firm SSE has ‘started work’ developing an underground cavern to store hydrogen, which could help the UK keep reserves of renewable energy and prevent blackouts in the future. This site, which will be built in east Yorkshire, could help the country stockpile electricity generates from renewable sources like wind and solar, and use them during the freezing, windless conditions, similar to the ones that the UK faced last week. Energy storage sites like this one will be crucial to help balance the National Grid as the country transitions towards renewable sources like wind, which are intermittent, and could stop generating electricity depending on the weather.

This pilot project will cost £100 million, leading to a full scale operation by 2028, which SSE say will store 320 GWh of hydrogen. With annual gas consumption in the UK of over 800 TWh, that would be enough to keep us going for about three hours! They don’t tell us what we are supposed to do for the rest of the winter!