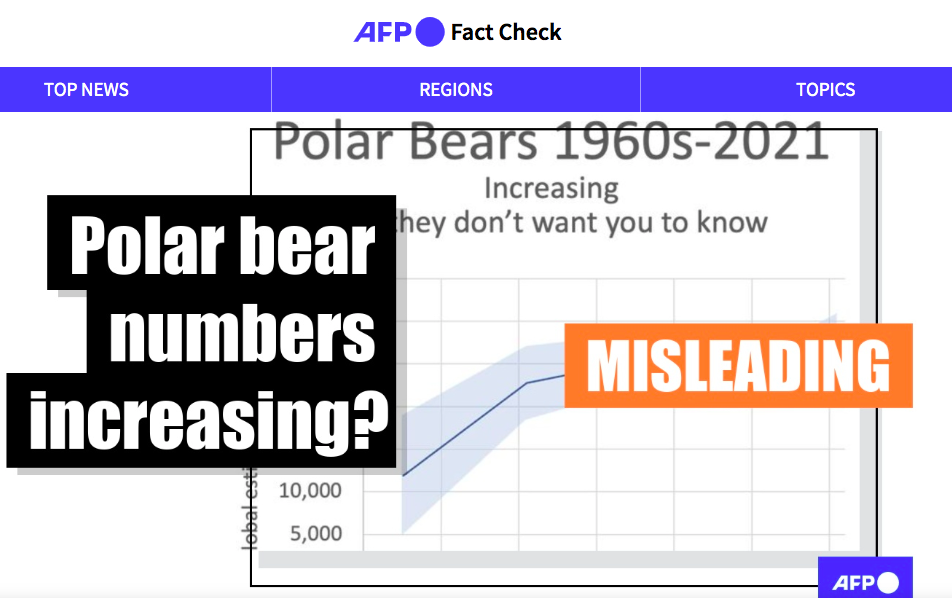 The critique insists that the message conveyed by the graph – that polar bear numbers are growing “in spite of global warming” – is “misleading”, and that experts say “human-driven climate change poses a threat to polar bears.” However, zoologist Dr. Susan Crockford counters that some polar bear specialists are attempting to cast a smoke-screen over the relevant facts of the matter.
Regarding the assertion that estimates of polar bear population abundance in the 1960s are “pure guesswork”, Crockford points out that sea otter specialists, without shame or apology, routinely use a benchmark figure of “about 2,000” for the pre-protection population size of the species, even though it is based on similar “guesswork”. No one insults these biologists for citing this figure.
In fact, polar bear specialists are unique in the conservation field for refusing to accept a benchmark figure for the 1960s population size, despite eight published estimates made by their peers. Crockford uses an overall average of these, about 10,000 (range 5,000-15,000), as a reasonable compromise, as did polar bear specialist Markus Dyck, who died doing Arctic field work in 2021.
In 2008, the US Fish and Wildlife Service used a figure of about 12,000 in a “frequently asked questions” document: this is the number used by Lomborg in his graph.
As for more recent numbers, PBSG members continue to insist that none of the global population estimates they’ve ever made can be used to assess the conservation health of the species.
Crockford asks:
“How can the public be expected to assess the effectiveness of polar bear conservation measures if there is no way of determining whether numbers have increased or decreased over time – yet are expected to accept without challenge the output of a recent computer model that predicts a catastrophic future, as this ‘fact check’ encourages readers to do?”
Crockford says summer sea ice has declined dramatically since 1979 and especially so in the Svalbard region of the Barents Sea over the last 20 years. However, Svalbard polar bear health and abundance have not been negatively affected, which data from field work and peer-reviewed scientific studies done by polar bear specialists show to be true.
Empirical evidence like this explains why computer models predicting a dire future for polar bears are worthless: much less summer sea ice does not inevitably lead to a decline in polar bear numbers as these models assume.
Susan J. Crockford is a zoologist and author of the books The Polar Bear Catastrophe That Never Happened  and Fallen Icon: Sir David Attenborough and the Walrus Deception. She writes about polar bears and other polar animals at PolarBearScience.