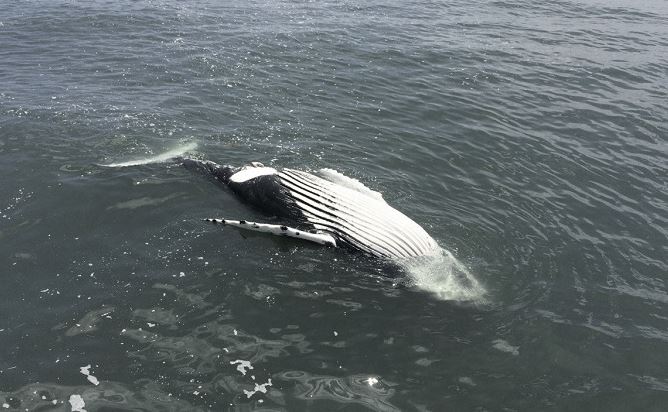 There have been a lot of dead whales on the East Coast of the US lately. David Wojik noticed that NOAA was investigating 178 dead whales in something called an Unusual Mortality Event, or a UME — it’s like an episode of X-Files.

NOAA says this wave of strandings mysteriously started in 2016 which was before the offshore wind factory industry got going —  but Wojik points out the timing matches very well. Offshore lease sales for the wind industry ramped up 2015-16. There were nine big sales, he says, off New Jersey, New York, Delaware and Massachusetts. And not so coincidentally, apparently 2016 was also the year that NOAA started giving permission slips for whale hunts, sorry whale harrassments for “geotechnical and site characterization surveys“.

In bureaucrat-valium-lingo, the license to cause incidental dead whales is called an IHA — or an Incidental Harassment Authorization. This appears to have fooled Greenpeace.

Although since wind turbines are a sacred totem, NOAA could have called them a 007 License to Kill Humpbacks and they might not have cared either. The whales are dying for the planet you know. They’re probably happy about it too.

To date NOAA has issued an astounding 46 one-year IHA’s for offshore wind sites. Site characterization typically includes the protracted use of what I call “machine gun sonar”. This shipboard device emits an incredibly loud noise several times a second, often for hours at a time, as the ship slowly maps the sea floor.

Wojik explains why wind “farms” might pose a threat to whales, and why it’s likely to get worse with bigger turbines and larger farms going in:

There are lots of ways this sonar blasting might cause whales to die. Simply fleeing the incredible noise could cause ship strikes or fish gear entanglements, the two leading causes of whale deaths. Of the whales could be deafened, increasing their chances of being struck by a ship later on. Direct bleeding injury, like getting their ears damaged, is another known risk, possibly leading to death from infection. So there can be a big time difference between blasting and death.

Note also that these deaths need not be in the immediate vicinity of the sonar blasting, so spatial correlation is unlikely. Humpbacks in particular are prodigious travelers. One group was tracked traveling 3,000 miles in just 28 days, over 100 miles a day on average.

Thus a sonar blasting, site characterization in one place could easily lead to multiple whale deaths hundreds of miles away. If one of these blasters suddenly goes off near a group of whales they might go off in different directions, then slowly die.

For more on this noise see my https://www.cfact.org/2022/07/26/threat-to-endangered-whales-gets-louder/

The whole original article is at CFACT.