In 2009, Tim Flannery’s Geodynamics won a $90 million government grant. By 2016 it was all over. But I guess six years is a long time in the world of geothermal energy hype.

There’s an enormous geothermal pool under the Latrobe Valley that can give us cheap, clean energy

About 650 metres beneath the Latrobe Valley, the heart of Victoria’s coal country, lies a little-known, naturally hot 65℃ pool of water in an enormous aquifer.

This aquifer is a source of geothermal energy – a renewable source of heat or electricity that is, so far, being used to heat an aquatic centre in the town of Traralgon. They chose it – over natural gas, coal-fired power or even emissions-free solar and wind – because geothermal energy is now the cheapest option for heating.

The hot aquifer was first reported as long ago as 1962, when government geologist J.J. Jenkin noted many “occurrences of high temperature waters in East Gippsland”. We now know the hot water underlies about 6,000 square kilometres of Gippsland, from Morwell in the west to Lakes Entrance in the east, and holds the equivalent of A$30 billion of heat at today’s natural gas price.

But with natural gas flowing from Bass Strait, and vast reserves of brown coal in the Latrobe Valley, there has been little incentive to develop alternative energy sources. With the coal era now drawing to a close, it’s time we made better use of this vast, clean source of energy to help cut national emissions and ease the energy transition.

So what went wrong with Geodynamics?

Before the closure, the company had managed to extract super-heated water from five kilometres below the earth’s surface and use it to generate small amounts of electricity.

“The technology worked but unfortunately the cost of implementing the technology and also the cost of delivering the electricity that was produced to a market was just greater than the revenue stream that we could create,” Geodynamics chief executive Chris Murray said.

“I think it was talked up too much — it’s a very nice concept on the front page of a newspaper, looks very easy to do, and I think it was over-spruiked,” he said.

I’m happy for people to try these things on their own dime. Professor Beardsmore from his LinkedIn profile appears to suggest he has developed better predictive drilling models, which might help him find his hot water with fewer test drills. If this gives him the edge that Geodynamics lacked, good luck to him. But given the track record of failure of such ventures, he’ll likely have a lot of convincing to do, to secure his funding.

Omicron is a superspreader, but so far behaving better than expected

It appears Omicron will replace Delta around the world. Not only has it rapidly replaced Delta in South Africa,  there have now been three superspreader events in Norway, one of which infected 120 people, and another one in Denmark that infected 52.

Omicron  is acting for all the world like the same cluster spreading Covid we know so well. And of course, it is happily shed and spread by both the vaccinated and unvaccinated alike. Quick, lock one of them up?

With 16,000 cases a day, and test-positivity up to 25%, there is no doubt there is a real and rampant wave of infections.

All over the world epidemiologists and doctors are watching for hospitalization statistics from South Africa. What is promising are the change in symptoms:

In another encouraging sign, the Steve Biko and Tshwane District Hospital Complex in Pretoria, South Africa, said that most patients in the Covid wards didn’t require oxygen. That marks a departure from previous waves.

There are conflicting reports. There was a story a few days ago of how 10% of cases in hospital were children under two. Another reporting teenagers struggling.

There appears to be some immune escape, meaning that protection from a past infection isn’t as good, and people are more likely to get reinfected. (Though three times a tiny  number is still a small number).

It would be the sweetest irony if Big Pharma were undone by the great unvaxxed of Africa where the poorest people in the world don’t want the vaccines may have brewed a new variant that, maybe possibly, could give a lot of people protection. But it’s too soon to call.

No one wants to be reminded, but sometimes the sting can be delayed. It’s summer in South Africa, so people have more Vitamin D, and the virus is mostly spreading in the young university students. Last year in the UK autumn — when things seemed to be going so well it took  6 – 12 weeks to spread from young party goers to high risk people who were acting more cautiously. Deaths are also delayed by around three weeks, and possibly even longer.

Omicron is just starting to show in most national graphs on Nextstrain.

In the last two weeks of November 240 cases were fully sequenced in South Africa and 207 of them were Omicron. The cases are not necessarily randomly chosen for sequencing. 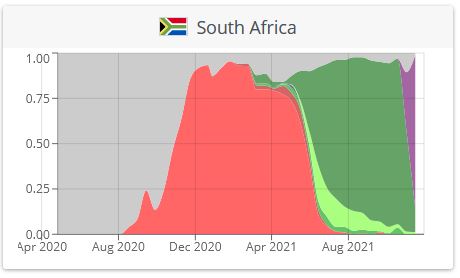 Omicron takes over from Delta. Source.:Nextstrain.

There are currently about 16,000 cases a day in South Africa, up from a couple of hundred a month earlier.

A week ago in Botswana only a quarter of the cases were Omicron. But in Ghana, about 70% were. In the USA already 14% of cases are Omicron, based on 120 samples.

But in most nations there isn’t enough data. 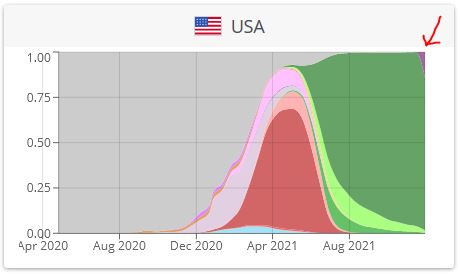 And so it begins in the USA (top right corner).

Things in Norway have moved so far the assistant health director Espen Rostrup Nakstad already says that they have no control over the new variant.

At the Louise Resturant, Oslo, as many as 120 people were infected on November 26th. All known cases were fully vaccinated. At another event on Nov 27th at least 42 picked up infections. There is “reason to believe” it is Omicron, but it is not confirmed. At the third event, so far only seven have confirmed infections but 100 are isolating.

Meanwhile in Denmark 53 people were infected with Omicron at a luncheon.

An Israeli Cardiologist had three doses of Pfizer, but still caught the Omicron variant in London. He met 100 people or so before testing positive but infected only one. His case was mild.

For anyone wanting to trainspot (or strainspot)–  Don’t get fooled by the graphs with only 1 sole sample. Like South Korea. Mousing over the data on the Nextstrain page displays the number of samples at any point on the graph. E.g. 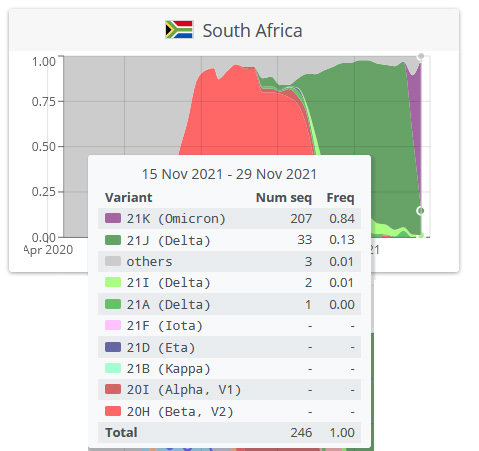 How much fun can you have?