BP has been in the news lately, with its announcement that it is going Net Zero by 2050: 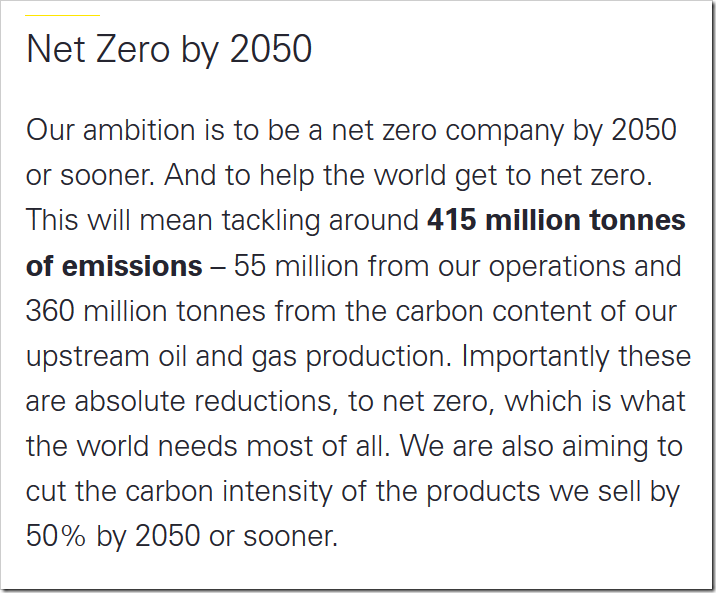 And this is how they intend to do it:

Now, you may be puzzled how you can carry on producing oil and gas, but not emit any CO2 when you burn it.

And so are many others!

And if you believe that this is all just a bit of virtue signalling PR by BP, you may be right.

The BP presentation is hopelessly vague as to how it is going to achieve all of this. But Greenpeace have suspicions of their own. Here’s their take, which I suspect is not a million miles away from what will happen:

When you cut away the fat, here’s what’s left: Bernard Looney isn’t going to stop BP drilling for new oil and gas.

Reinventing BP – as the speech was titled – means a little bit less oil and gas, and a little bit more renewable energy. But the core business won’t change. “BP is going to be in the oil and gas business for a very long time,” he said. “That’s a fact.”

Does this meet the needs of the climate? Absolutely not.

BP has a problem. On the one hand, it wants to be seen as a responsible company, one that is taking the climate emergency with the seriousness it deserves. On the other, it still makes huge profits from digging up the very fossil fuels that caused the emergency in the first place.

Fortunately, BP has a solution. A change at the top will help reshape the company for this new, hotter world. Out goes the hard-nosed oil men of old, in comes someone more in tune with the sensibilities of our modern times. Someone who can deliver BP’s charm offensive to persuade the world that it’s serious about the climate crisis.

Bernard Looney is that person. Or is he? He says he understands the frustrations of people who feel BP is not moving quickly enough to cut its share of global emissions, and “shares their deep concern”. People like the Greenpeace activists who shut down BP’s head office in London on his first day in the job. But Looney was head of oil drilling at BP for years, and beneath the shiny green veneer lies someone who plans to keep drilling for oil for years to come.

Looney will reveal just how much he gets it, as he delivers his maiden speech as BP CEO. He will lay out his vision of how the company will respond to the climate crisis.

In truth, Looney only needs to say one thing. That BP will stop drilling for new oil and gas, right now.

BP is projected to invest $71 billion over the next decade in finding new oil and gas. But this can’t be burnt if there’s to be any chance of keeping temperature increases below 1.5ºC. There’s a global agreement to meet this target and avoid climate breakdown, but it’s in jeopardy until BP decides to stop digging up more fossil fuels.

In reality, Looney’s speech won’t say anything like this. Instead, he will say that BP will become net zero carbon by 2050. At face value, this sounds great. But it’s a smokescreen, designed to draw attention from the fact that BP has no intention of ramping down the oil and gas investments.

Net zero carbon is an accounting trick, based on the idea that someone else will clean up any carbon emissions BP is responsible for. BP will continue with its $71 billion plan to release even more carbon into the atmosphere, but will ‘offset’ those emissions elsewhere or rely on new technologies that don’t exist.

That’s the theory. In practice, it doesn’t work like that.

Offsetting means doing something that will cancel out BP’s emissions. Planting trees to draw down and store carbon is one example – expect Looney to talk a lot about trees. But this approach is fraught with problems.

Trees take a long time to grow. To be effective, BP would need to guarantee these trees would survive for decades. And while planting trees and restoring forests is good, BP would need a mind-boggling number of trees to take care of its emissions. Shell’s CEO has talked of planting “another Brazil in terms of rainforest” to meet the 1.5ºC target.

More trees are definitely needed, and forests need to be restored to tackle the climate crisis. But it’s a terrible idea to let BP pump out carbon emissions now in the hope that someone else will plant trillions of tree later to make up for it.

What about new technologies? Looney will no doubt refer to carbon capture and storage, sucking carbon out of the atmosphere and squirrelling it away. The problem is this technology is unproven and doesn’t exist at the scale BP would need to reach net zero carbon.

And above all, whatever magic tricks Looney relies on, BP will still be pumping out fossil fuels. Once burnt, that carbon will heat the planet further still and the climate crisis will only get escalate. The only solution is to cut those emissions at source, by burning less oil and gas.

BP’s net zero carbon ambition might sound impressive, but means little in practice. The truth lies in where BP puts its money – pumping billions of dollars into new oil and gas shows it’s not serious about climate change.

BP’s net-zero carbon ambition won’t stop the climate emergency. The only choice BP has is to stop drilling for oil and gas, and go all out for clean, renewable energy instead.

When you drill into the detail, there are plenty of way BP can “cheat” the system, and not at a crippling cost.

Carbon offsets, for instance, are little more than a scam. The Energysage website, for instance, reckons that worldwide, the range of carbon offset prices in the voluntary offset market can be anywhere from $0.10 per tonne to $44.80 per tonne. Even at the top rate, BP could offset all of its 415 Mt of emissions for $18bn, a price worth paying if it allows them to carry on business as usual.

And I am perfectly sure there are many countries more than happy to provide dodgy offset schemes for much less.

And as Greenpeace point out, planting trees is not panacea it is made out to be.

Expect as well the buying up of renewable energy certificates, in the same way that “green energy companies” do now. Again, these have zero effect on emissions, as the renewable energy is already being produced. And I am sure there will be a burgeoning market abroad, which will be happy to sell them off cheap, no questions asked.

We can also expect BP to ramp up investments in renewable energy projects, where this can be profitable. Often this will simply involve buying up existing operations, which will have zero impact on global emissions but make BP’s balance sheet look a bit greener.

Even if they fund new renewable projects, this still won’t actually reduce emissions from the oil and gas they produce.

The final catch all is new technology. If CCS can be made to work, maybe BP will one day be able to produce all of the oil and gas it wants, safe in the knowledge that it can be burnt emission free.

But I suspect that is still a long way in the future. Until then the world still needs their product, with or without green accounting tricks.