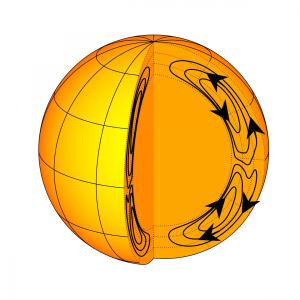 Ionized gas inside the Sun moves toward the poles near the surface and toward the equator at the base of the convection zone (at a depth of 200,000 km/125,000 miles).
Credit: MPS (Z.-C. Liang)

The title of the study cited in this report gives us the clue: ‘Meridional flow in the Sun’s convection zone is a single cell in each hemisphere’. The full cycle takes about 22 years on average, with a magnetic reversal halfway through.
– – –
The sun’s magnetic activity follows an 11-year cycle. Over the course of a solar cycle, the sun’s magnetic activity comes and goes, says Phys.org.

During solar maximum, large sunspots and active regions appear on the sun’s surface. Spectacular loops of hot plasma stretch throughout the sun’s atmosphere and eruptions of particles and radiation shoot into interplanetary space.

During solar minimum, the sun calms down considerably. A striking regularity appears in the so-called butterfly diagram, which describes the position of sunspots in a time-latitude plot.

At the beginning of a solar cycle, sunspots emerge at mid-latitudes. As the cycle progresses, they emerge closer and closer to the equator. To explain this “butterfly diagram,” solar physicists suspect that the deep magnetic field is carried toward the equator by a large-scale flow.

“Over the course of a solar cycle, the meridional flow acts as a conveyor belt that drags the magnetic field along and sets the period of the solar cycle,” says Prof. Dr. Laurent Gizon, MPS Director and first author of the new study.

“Seeing the geometry and the amplitude of motions in the solar interior is essential to understanding the sun’s magnetic field,” he adds.

To this end, Gizon and his team used helioseismology to map the plasma flow below the sun’s surface.

Solar sound waves have periods near five minutes and are continuously excited by near surface convection. The motions associated with solar sound waves can be measured at the sun’s surface by telescopes on spacecrafts or on the ground.

In this study, Gizon and his team used observations of sound waves at the surface that propagate in the north-south direction through the solar interior. These waves are perturbed by the meridional flow: they travel faster along the flow than against the flow.

These very small travel-time perturbations (less than 1 second) were measured very carefully and were interpreted to infer the meridional flow using mathematical modeling and computers.