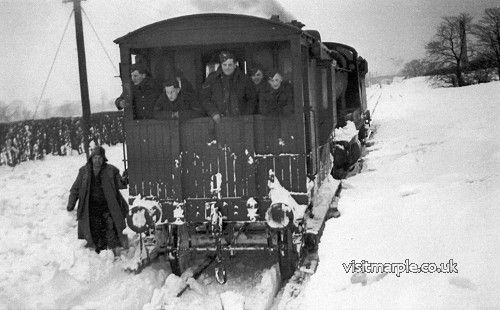 According to the BBC/Met Office, Britain’s weather has been wild this year, and it is getting wilder. And their evidence?

A wet February, dry May and a couple of hot days in August. Statistically of course, you are likely to get one of two of these sort of events every year, with records going back 150 years or so.

So let’s go back and compare 2020 with some earlier years on record. Far from cherry picking years, I am only going to look at years ending in a zero, starting with 1940. The years 1950 and 1960 will follow later.

The year started with what was the coldest January on record at the time, a record which has only been beaten since by the infamous winter of 1962/63.

Heavy snowfall affected most of the country, often two feet deep, and continued into February, to be followed by another period of intense cold later in mid month:

On 21st January, temperatures went as low as an astonishing minus 23.3C at Rhayader in Wales, which still stands as the record for the coldest night for any month in Wales.

The winter of 1939/40 as a whole still stands as the fourth coldest in England.

By the spring however, Britain was basking in a heatwave. May was the hottest since 1919, and it got even hotter in June, which still holds the record for the warmest June on record.

Temperatures reached 91F during the month at Cranwell, and it is the sunniest June on record in both Scotland and N Ireland.

The wild weather continued into July, lurching from heatwaves to cold and wet. It was the wettest July in Scotland, only since surpassed by 1988, and parts of eastern England received three times the usual amount of rain.

Floods swept away houses and a bridge in Cromarty, and storms brought 65mph gales.

The crazy weather continued to seesaw, with August the driest on record at the time in England. It still remains the third driest, behind 1947 and 1995.

Britain’s wild weather had not finished though, with November breaking rainfall records across the country.

Clearly the BBC has no basis on which to claim that there has been anything unusual at all about British weather this year. For them to broadcast such misleading and inaccurate claims is, I am afraid, par for the course for the BBC.

But it is utterly shameful for the Met Office to collaborate in such a propaganda exercise. It certainly does not befit their status as supposedly objective and trustworthy publically funded organisation.