If you thought the first episode of last week’s BBC Christmas Lectures was bad, just take a look at the third and final episode, which is supposedly about our atmosphere!

Presented by Tara Shine, who describes herself as an Environmental Scientist, it begins by telling us the make up of the Earth’s atmosphere, but quickly turns into little more than a political dissertation.

Following the short introduction, she tells us how much the amount of carbon dioxide in the air has increased since pre-industrial times, and informs us that the planet has warmed by about 1C since.

And then categorically states:

“So CO2 is causing our planet to warm”

Nowhere is there any acknowledgement of the Little Ice Age, or that at least part of said warming might actually be natural.

Then we are treated to the emotive segment of the show, with Shine claiming that rainfall in Chad has been decreasing in the Sahel because of global warming. If she had bothered to read HH Lamb, she would know that the opposite is the case- the multi year Sahel drought took place when the Earth was cooling in the 1970s.

To make her young audience feel guilty, she then speaks to a young woman from Chad, who proceeds to wheel out the usual woke nonsense about indigenous people and suchlike. But her key contribution is to claim that Lake Chad has shrunk in recent years because of global warming.

In fact, the reason for the shrinking is not related to rainfall, but to massive irrigation projects. NASA, for instance, estimate that the amount of water diverted for irrigation quadrupled between the 1960s and 80s.

Despite this, recent satellite measurements show that the lake has increased in area sevenfold since the 1990s. But facts like these spoil a good story don’t they!

And, of course, while we’re on the topic, Ms Shine forgets to mention the fact that the extra CO2 in the atmosphere has led to a greening of the planet in general, and Chad in particular. Or that food production there has tripled since the 1980s.

Tara Shine then proceeds to play the Climate Justice card, reminding us that we in Britain emit much more CO2 per capita than in Chad, who suffer most from climate change – how unfair, she moans.

To illustrate this, she put one black ball in a bucket representing Chad. The next bucket gets to be quarter filled, which is India. Our bucket is half full, and the end bucket, representing the Great Satan, is full up. Strangely, she does mention that China’s per capita emissions are already higher than ours!

But does any of this matter, she asks. We, she says, are already all seeing the effects of climate change. Wildfires, she claims, are more frequent because of global warming.

In fact, a study published last month found that the opposite is true, and that wildfires have been reducing in intensity in the last two decades: 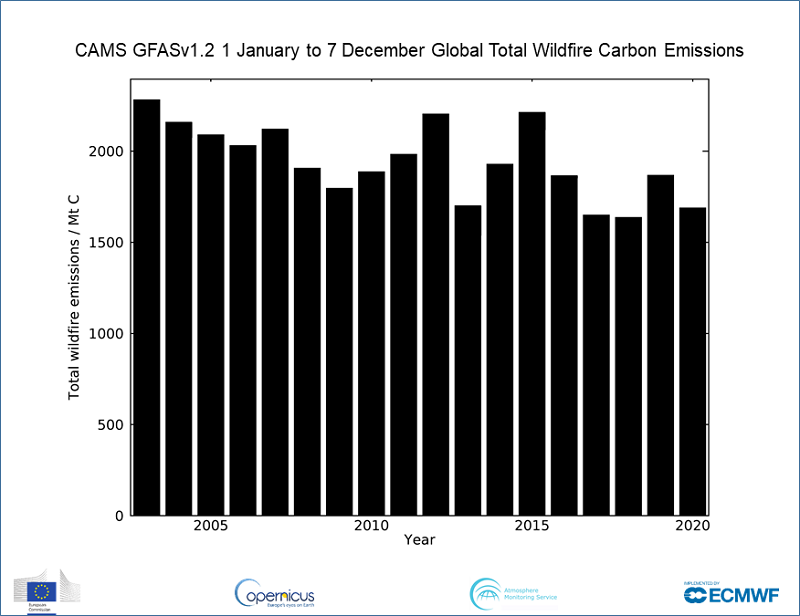 And, apparently, we are now seeing more extreme weather in Europe, including storms, floods and heatwaves (though curiously no mention of fewer cold waves!). She provides no evidence whatsoever to back this up, probably because there is none, as even the IPCC have been forced to admit.

In full climate-apocalyptic mode now, Shine plays a silly game to gull her impressionable audience into believing that global food production will be badly hit by rising temperatures. Maybe they would have preferred to hear the truth, which is that food production has been rising in leaps and bounds in recent decades.

Leaving all traces of objective science behind, she then launches into a long eulogy about renewable energy – (look at this “lovely wind turbine” she says at one point.). Then claims we have the technology (electrolysis) to store surplus wind power, for when the wind stops blowing. She omits to tell her audience of schoolkids that, while the technology may exist, it is horrifically expensive and not practicable at the scale needed.

She also mentions biodigesters, planting trees and restoring peat lands, as if they were going to be game changers, rather than a sideshow.

Finally she talks about making communities more resilient to climate change, with things like flood defences. (I think she means “resilient to bad weather”!).

In fact, thanks to the Industrial Revolution, which she wants us to feel guilty about, we are all much better able to withstand weather disasters, both in the affluent West and poor countries like Chad. That is why the number of deaths worldwide from disasters is now microscopic in comparison with a few decades ago.

Nowhere in the programme does she mention the enormous cost of climate policies, which have to be paid for by ordinary families, many of them poor. Does she not think this money might be better employed?

And nowhere is there any recognition that UK emissions are tiny in global terms, and that Asia and other parts are still busy ramping up their own emissions.

Her finishing statement sums up the blatantly political nature of the lecture:

“We know what to do, we just need to do a lot more of it, and we need to do it with greater urgency. We have the solutions, we have the knowledge, we have nature and science on our side.

It’s up to us to take action, and to use our voices. And every time we do, we create a ripple that keeps on growing.

They might just as well have let brought Greta on for an hour. At least it would have saved them some money!