It never ceases to amaze me how naive the Guardian is!

China has set out an economic blueprint for the next five years that could lead to a strong rise in greenhouse gas emissions if further action is not taken to meet the country’s long-term goals.

The 14th five-year plan, published in Beijing on Friday, gave few details on how the world’s biggest emitter would meet its target of reaching net zero emissions by 2060, set out by President Xi Jinping last year, and of ensuring that carbon dioxide output peaks before 2030.

China will reduce its “emissions intensity” – the amount of CO2 produced per unit of GDP – by 18% over the period 2021 to 2025, but this target is in line with previous trends, and could lead to emissions continuing to increase by 1% a year or more. Non-fossil fuel energy is targeted to make up 20% of China’s energy mix, leaving plenty of room for further expansion of the country’s coal industry.

Swithin Lui, of the Climate Action Tracker and NewClimate Institute, said: “[This is] underwhelming and shows little sign of a concerted switch away from a future coal lock-in. There is little sign of the change needed [to meet net zero].”

Zhang Shuwei, chief economist at Draworld Environment Research Centre, said: “As the first five-year plan after China committed to reach carbon neutrality by 2060, the 14th five-year plan was expected to demonstrate strong climate ambition. However, the draft plan presented does not seem to meet the expectations. The international community expected China’s climate policy to ‘jump’, but in reality it is still crawling.”

Unusually, this five-year plan did not set out GDP targets for the whole five-year period, but allowed for annual targets, with the first for this year a target of 6% growth. The Centre for Research on Energy and Clean Air said that coupled with the emissions intensity target, this could allow the growth rate of China’s emissions to speed up even further, rather than slow down, as is needed.

The key points are:

Indeed, according to Reuters, the report states China will continue to promote “the clean and efficient use of coal”.

The GDP target this year is an increase of 6%. No doubt the uncertainty around COVID has made China reluctant to commit to specific GDP targets through to 2025, as would normally be the case.

However, assuming an annual increase of 5% after this year, we would be looking at 5-year growth of 29%.

Working back from this, reducing carbon intensity per GDP by 18% would actually mean a rise in actual emissions of 6%. Similarly, energy consumption would rise by 12%.

Effectively this means that half of the extra energy consumption will come from fossil fuels, and half from low carbon.

Last year, thermal generation in China rose by 2.5%. However, this figure was artificially lowered because of COVID, which reduced power demand. With renewables and nuclear getting priority access to the grid, this lower demand primarily impinged on thermal.

A better guide to what is really happening, however, is the Q4 stats, by when the Chinese economy appears to have been getting back to normal.

This shows that thermal generation rose by 8%, or 99 TWh. Total power output increased by 163 TWh (excl solar, which is not published quarterly), with most of the rest (44 TWh) being hydro.

In other words, thermal is still accounting for two thirds of the increase in generation. 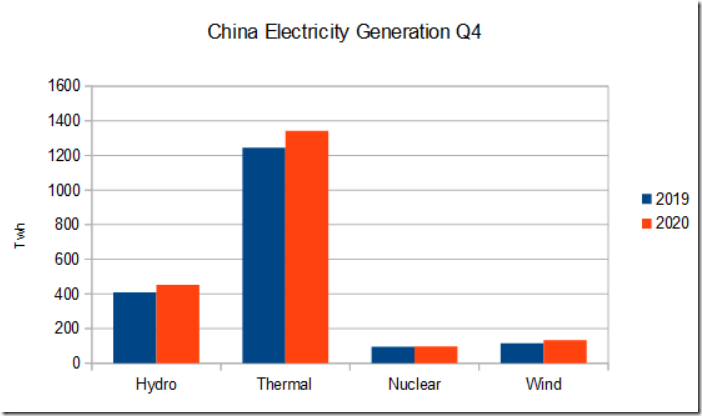 Carbon and energy intensity are in any event meaningless concepts, as maturing economies tend to expand into low energy sectors, such as services. Falling intensity does not mean that energy usage is declining.

As has been pointed out, the 18% target cut for carbon intensity is the same as the last five year plan, during which emissions have rocketed in China.

The reality is that renewable energy cannot supply all of the extra demand for energy, never mind start to replace fossil fuels.