We all heard about the Tesla Megabattery fire in Victoria last Friday, but you may not know it only started operating on Thursday night. Or that 30 fire trucks and 150 firefighters took 76 hours to get the blazing battery under control.

So it burned for three times longer than it operated.

Luckily no one would put a large Tesla battery inside their home, eh? 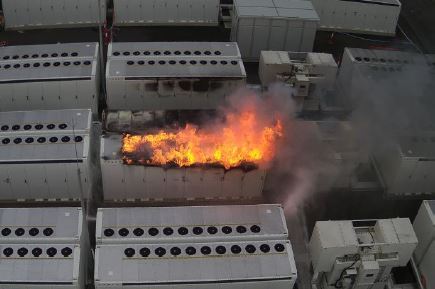 Firefighters  were essentially helpless to stop the 13 ton lithium battery from burning, but they did stop the rest of the battery plant catching fire.

“…we cannot put them out with water or anything else. The best way to deal with these things is to let them burn until they are burnt out. If we try and cool them down, it just prolongs the process. …this wind is helping us by keeping it burning fairly freely,” the CFA’s Assistant Chief Fire Officer Ian Beswicke said.

They also measured air quality and issued warnings to residents to get themselves and their pets indoors, close windows, and turn off their heating and cooling so they didn’t breath in the toxic smoke. (That must have been a fun weekend in midwinter.)

No price is too high when you’re saving the planet.

A fire at French renewable energy giant Neoen’s Victorian Big Battery at Geelong continued to burn into Sunday, with fire crews awaiting experts from Tesla to assist in opening the Megapack battery that first caught ablaze.

The fire started at the partly federally funded 300-megawatt Tesla Megapack battery project at Moorabool on Friday morning. Fire crews quickly containing the blaze but were unable to extinguish it completely to determine what started it. A Country Fire Authority spokesperson said the fire had been contained to two battery packs, but sparks flared up every so often, re-igniting the blaze. Tesla did not respond to requests for comment.

The Tesla battery is expected to become the largest in the southern hemisphere, capable of discharging 450 megawatt hours (MWh) of electricity, as part of a Victorian government push to transition to renewable energy.

Luckily no one was injured, but some nearby crops will be enriched in heavy metals. 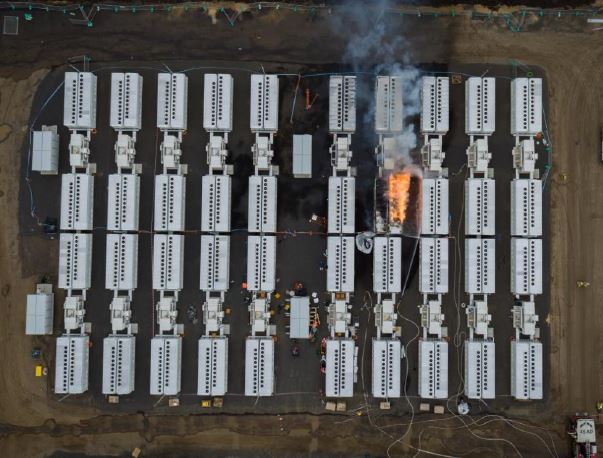 Don’t put one of these near your home

The first sign of any operation was at 6:15pm the night before. Some part of the plant was operational for at least 16 hours.

So really it burned for four times longer than it ran for.

The incident did not disrupt the grid, but if the battery plant was operating on a hot sunny day and it caught fire, Victoria might not be so lucky. If this had been a coal plant on fire, presumably someone would have already calculated the cadmium and lead effect and how many spotted-quoll-years were lost.