The Greens will not be happy. The push for pointless decarbonization inexorably leads to nuclear power.  The UK is not only about to sign deals for 16 small nuclear reactors, they are shortlisting sites for a fusion plant. It’s another unintended consequence the Greens did not see coming.

U.K. ministers will put nuclear power at the heart of Britain’s strategy to reach net zero carbon emissions by 2050 in government documents expected as early as next week, the Financial Times reported.

Business Secretary Kwasi Kwarteng is to unveil an overarching “Net Zero Strategy” paper as soon as Monday, along with a “Heat and Building Strategy” and a Treasury assessment of the cost of reaching the 2050 goal, the report said.

The main strategy will have a heavy focus on Britain’s nuclear power program. Prime Minister Boris Johnson was expected to give the go-ahead to the documents on Friday, according to the report.

The catch, consumers will have to pay a levy years before they get the electricity:

The creation of a “regulated asset base” model will be key to delivering future large atomic-power stations. Under the plan, households will be charged for the cost of a plant via an energy levy long before it begins generating electricity, the report said.

The nuclear levy is still a “Green Fee” or a “carbon tax”. But at least it won’t leave the country facing an energy crisis every time the wind slows. The UK still has plenty of shale gas to be fracked if only they’d let themselves use it.

A recent Essential poll shows that without any public debate at all, 50% of voters already support nuclear power. When the undecideds (18%) hear that there are 450 nuclear plants around the world, the number of supporters can only grow.

Australia will “go Nuclear” too if the Green Blob pushes us to adopt the witchcraft Net Zero goal that uses power plants as “weather changing” machines.

The thing slowing nuclear power in Australia was that coal power was so much cheaper. There is an opening her e for one of the big parties to pull a nuclear rabbit out of their hats. The Coalition may lose the coal territory seats of Queensland and the coming election, especially given how unpopular they are in WA too. The Australian Workers Union now backs nukes. Imagine if the Labor Party planned for nuclear power which would allow them to offset the emissions from an extension of coal stations. The Labor Party would suddenly look pragmatic, differentiate itself from The Greens, and the Liberals would be left holding the “Green Hydrogen” and Snowy 2.0 pumped hydro fantasy bag that no one believes in.

One third of the Greens might even vote Labor because they support nukes.

Support for nuclear energy in Australia 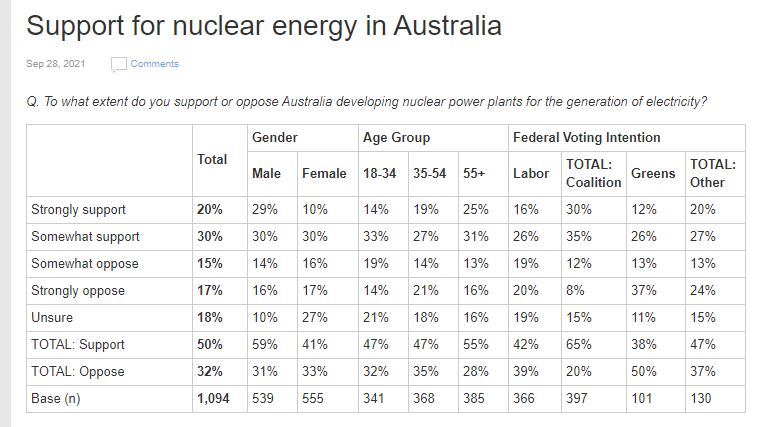