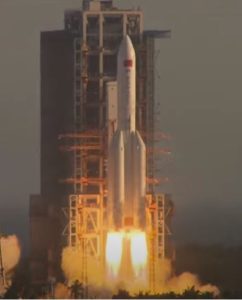 This should rattle the Wokeness Cage: Russia and China are actively testing the US defences in space on a daily basis. US assets are being harassed with lazers, radio jammers, cyber attacks and even other satellites with robotic grappling hook arms. The Russians even launched a satellite into an orbit so close to a US Security satellite that from the ground people couldn’t tell if it was being attacked, then, in something like a James Bond movie stunt, the Russian satellite launched a little target and shot it, “dangerously close”. That was in 2019. We can see now why Trump set up “Space Force”. A General from which estimates China may overtake the US in space by the end of the decade.

Meanwhile, China is a developing nation that doesn’t need to reduce CO2 emissions at all, and in the US, some schools for gifted and talents students are being closed “because they are racist and elitist“.

“The threats are really growing and expanding every single day. And it’s really an evolution of activity that’s been happening for a long time,” [said] Gen. David Thompson, the Space Force’s first vice chief of space operations…

Both the Russians and the Chinese are working on satellites that can attack other satellites, he said. For some time now there have been reports that China was developing a satellite that could claw another satellite or grab one with a robotic arm or a grappling hook. The Chinese government has several reasons to want to disable U.S. satellites, which have been useful in revealing concentration camps built to intern Uyghur Muslims and new Chinese nuclear missile silo fields.

In 2019, Russia deployed a small satellite into an orbit so close to a U.S. “national security satellite” that the U.S. government didn’t know whether it was attacking or not, Thompson said. Then, the Russian satellite backed away and conducted a weapons test. It released a small target and then shot it with a projectile.“It maneuvered close, it maneuvered dangerously, it maneuvered threateningly so that they were coming close enough that there was a concern of collision,” he said. “So clearly, the Russians were sending us a message.”

Thompson said China is sending up new satellites twice as fast as the US is managing to, and that the budding superpower is working on a system of global satellites aimed at surveilling any part of the world.

‘They’re fielding operational systems at an incredible rate,’ he said.

In theory it could disrupt or even disable US satellites which revealed information about China’s nuclear operations and the existence of Uyghur Muslim concentration camps.

‘The Chinese are actually well ahead’ of their Russian counterparts, Thompson claimed.

But Russia blew up an old spy satellite of their own two weeks ago, leaving a trail of debris of 1,500 trackable pieces circling the Earth possibly causing havoc for spacecraft for years.