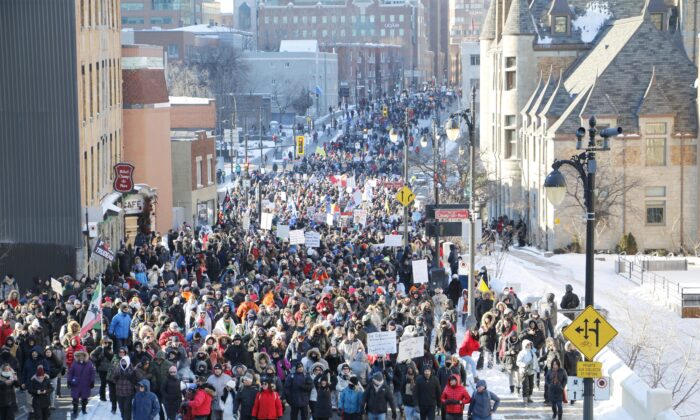 Noé Chartier reported in Epoch Times Thousands of Protesters March in Montreal to Denounce COVID ‘Tyranny’.  Excerpts in italics with my bolds.

MONTREAL—Several thousand protesters took to the streets of downtown Montreal Saturday to voice their opposition to the province’s pandemic measures—whether the recently imposed curfew or the vaccine passport.

Not all were unvaccinated, with some taking a stand for freedom of choice or having received the first two doses and refusing a third due to constantly changing goalposts.

People’s Party of Canada leader Maxime Bernier, who’s been vocal in criticizing the restrictions and mandates, was in attendance with a group of his supporters.

“I’m here like everyone else to tell the Trudeau and Legault governments that enough is enough. It’s not by trampling on our rights and freedoms that we’re going to solve the pandemic,” Bernier told The Epoch Times.

“They’re trying to turn the non-vaccinated into the scapegoats of this pandemic. It’s completely unjust, discriminatory. The real scapegoats are the politicians ruling us. They’ve had years to change the health-care system, which is a totalitarian, socialist, the state controls all—and that’s why the system is crumbling.”

Bernier says we should learn to live with the virus and protect the most vulnerable while letting others get on with their lives.

“I’m here to defend and protect freedom against the tyranny, against the darkness that ruins everything,” said Mohamad Reza Zeinali, a nurse who hasn’t been working since April 2021, refusing to be tested three times a week or to take the vaccine, which he calls “experimental.”  “It takes at least five to ten years to know how safe it is,” he says.

“The [tyranny] has to stop, it’s gone too far. I’m here to stand up for my rights, my kids’ rights, everything,” said Marshall Golding, who works as a delivery truck driver. 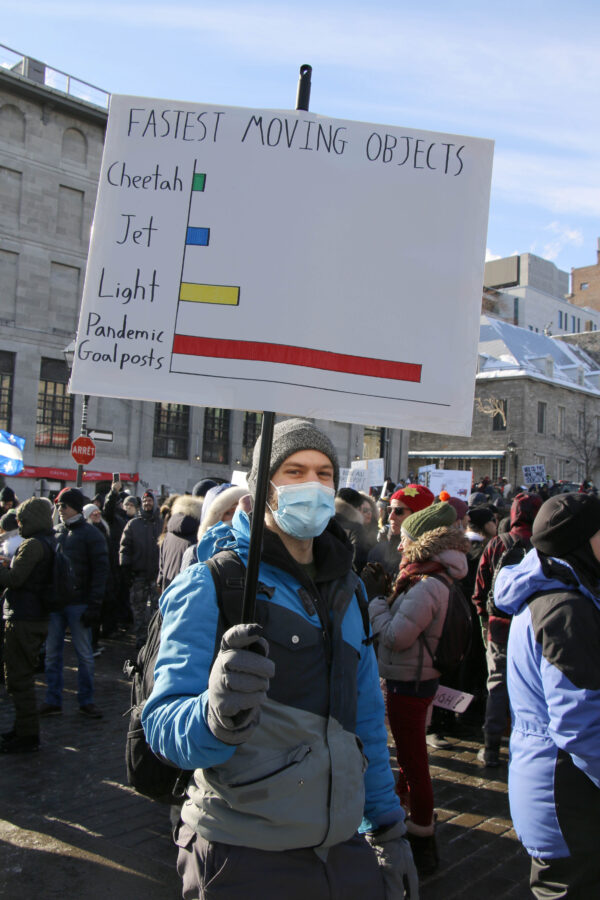 Throughout the march from Old Montreal and through downtown streets, a 70-year-old woman was walking a bit ahead of the main body, leading the procession.  Claire refused to give her last name and have her picture taken, but said she was attending her 15th or so protest against government measures.  “We’re sick of this criminal government,” she said. “Everything we’re going through is ridiculous. The masks, the curfew—they’re lying to us all day long.”

A Montreal police spokesperson said the protest went smoothly with no tickets given or arrests made.

On Jan. 1, police handed out 57 fines to protesters who defied the curfew in Montreal and made one arrest for an assault on an officer, CBC reported. Fines for breaking the curfew can go as high as $6,000.

Quebec reimposed a 10 p.m. to 5 a.m. curfew on Dec. 31 to try to stem the rise in cases, and the government announced this week it would further restrict unvaccinated people’s access to the public space.

From Jan. 18, those without a vaccine passport will be barred from entering the state-owned liquor and cannabis stores, and the government says it is consulting with the industry to reduce even more the access to other non-essential services. The province also seeks to eventually require three doses to qualify for the vaccine passport.

Federal Minister of Health Jean-Yves Duclos said on Jan. 7 that he’s in favour of the provinces making vaccination mandatory.