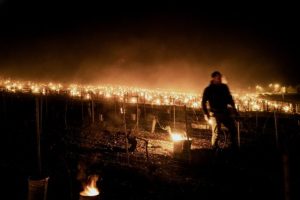 ‘Climate change’ gets the blame of course, which is code for human activities in the media, politics etc. How trace gases might cause warmth one month and frosts the next in a particular region of the world is not explained. Short video via link below.
– – –
Climate extremes in France this spring have again made it a race against time for vineyard owners to protect their crops, reports BBC News.

March warmth and April frosts in 2021 resulted in one of the country’s lowest wine production in years. This year is proving every bit as tough.
– – –
France experiences coldest April night since 1947
Published: 4 April 2022