So much for stranded assets then.

Is there any better proof that “believing” in climate action is just a fashion statement? For all the talk of the end of fossil fuels, the biggest and most powerful funds in the world sign up for their “Net Zero” clubs but pour money into oil, gas and coal, hither thither, anyway.

The 30 biggest funds in the world manage  €42.5 trillion  in assets.  These funds are so big, they can move markets if they want too…

Soak in that hypocrisy

Larry Fink starred at Davos and other events  pontification for years on the importance of “tackling climate change”, how it’s an investment risk, and on how “climate change will upend” the way we do business, and how we need to do “long termism“. But he’s the CEO of BlackRock, the largest asset management fund in the world and they don’t mind at all they profit from all the fossil fuels. They joined the Net Zero Asset Manager Alliance, but do almost nothing. Indeed, vocalizing about what bad investments fossil fuels are while investing in them, is like a reverse pump and dump. They’re just scaring off the competition.

Poor old journalists and NGO’s are flummoxed, but at least they are paying attention:

A new report alleges broken promises on the part of bankers and asset managers who just a year ago pledged to fight global warming.

None of the world’s largest asset managers has definitively called on fossil-fuel companies to stop the development of new oil and gas projects.

Surely, one would think, given all the climate-conscious talk coming from Wall Street bigwigs like BlackRock Inc. Chief Executive Officer Larry Fink, that the investment industry would be using all of its muscle to press the world’s worst polluters to reduce their production of dangerous greenhouse gases.

Instead, the opposite is true.

Together, 30 of the biggest asset managers have at least $550 billion invested in oil, gas and coal companies that have expansion plans, and even more alarmingly, they continue to provide “fresh cash to companies that are ignoring climate science,” said Lara Cuvelier, sustainable investment campaigner at Reclaim Finance, a nonprofit which published a scorecard Wednesday grading investment firms on their environmental commitments. 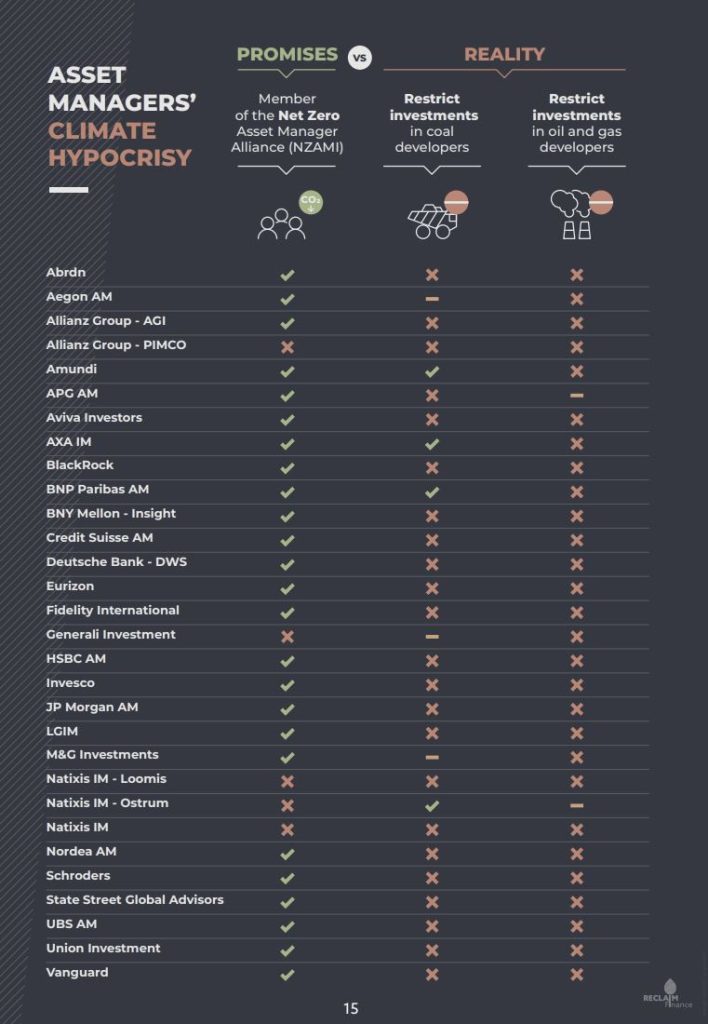 Being a Net Zero Manager means doing nothing at all…

2. Oil and gas: The 30 asset managers have combined holdings of US$ 468bn as of March 2022 in 12 major oil and gas companies, which are among the biggest short-term developers in oil and gas (including in Gazprom, Saudi Aramco, BP, Shell, TotalEnergies, Chevron and Exxon).4 Exxon is the company the most supported by the asset managers, which have combined holdings of US$ 130bn in shares and bonds of the US company.

23 out of the 30 asset managers do not restrict investments in companies launching new coal projects.

It’s always about the money, except when it’s about power.