The deal everyone is talking about, that has just gone through:

NEW YORK, April 25 (Reuters) – Elon Musk clinched a deal to buy Twitter Inc (TWTR.N) for $44 billion cash on Monday in a transaction that will shift control of the social media platform populated by millions of users and global leaders to the world’s richest person.

It is a seminal moment for the 16-year-old company that emerged as one of the world’s most influential public squares and now faces a string of challenges.

“Free speech is the bedrock of a functioning democracy, and Twitter is the digital town square where matters vital to the future of humanity are debated,” Musk said in a statement.

Keep in mind that Twitter is slated to report first-quarter earnings this Thursday, and originally the board was going to wait until after that earnings announcement to respond to the bid. Something changed.

My suspicion is the financials of the Q1 earnings report will not support the $54.20 high end evaluation offer originally proposed by Musk. If the low Q1 earnings rumors are accurate; and if Twitter had declined or fought the offer; the board would have been in the position of declining a deal that was substantially higher than the company market value, a tenuous position legally. Thus, a deal was made.

Which raises the question of how Twitter makes money?

Twitter has struggled to be profitable. Will it become profitable and maintain the high shareprice, and pay off the debts Musk is taking on to buy it? Does Musk expect to make it profitable, or did he just buy it as an act of philanthropy “for free speech” or as a challenge because he damn well could.

Twitter is obviously a political tool, as the one sided censorship shows. Like all forms of media, it’s more about the power than the shareholder returns — which raises the question of why the current sellers would sell. Speaking of which, the four current largest shareholders of Twitter are the infamous Vanguard Group, Morgan Stanley, Blackrock Inc, and State Street, — the who’s who of dark asset managers. As Wikipedia describes Blackrock — it’s the biggest of the big, and with tentacles in every pot:

“BlackRock is the world’s largest asset manager, with US$10 trillion in assets. …[it] has sought to position itself as an industry leader in environmental, social and corporate governance (ESG). The company has faced criticism for worsening climate change, its close ties with the Federal Reserve System during the COVID-19 pandemic, anticompetitive behavior, and its unprecedented investments in China.

Arguably, these monster fund managers could “afford” to lose money on Twitter in order to boost profits in all their other areas. Like, for example that Blackrock owns 7% of a certain pharmaceutical company called Pfizer, and Vanguard owns 8% of the same company. If they were using (or rather abusing) Twitter to suppress any news that hurt their other investments, or elect governments that help them, that rather raises the stakes. They wouldn’t sell Twitter for the profit of selling it unless they thought they had no legal choice, or they thought they could neutralize or sabotage the Free-Speech-Twitter after the sale.

What would stop the Octopus-Funds from abusing their social media pet corporations? Corporate Law.

Arguably, the Twitter Board are accountable to the Twitter shareholders, and are supposed to be making profits for them, not for other shareholders. It’s a legal bomb that Ron De Santis, Governor of Florida has pressed the button on. As he sees it, the Pension Fund of the State of Florida owns shares of Twitter, and the way the Twitter board was behaving looks like an injury to the fund.

“We’re going to be looking at ways that the state of Florida can hold the Twitter Board accountable for breaching their fiduciary duties...”

It’s a very big game of chess. Has Elon Musk just outsmarted the Twitter Board and caught them at their own game, or will the same machine that used Twitter, sell it, and then sabotage it with cancel culture, and leave him holding the debt?

Because, let’s face it, the Haters are not coping well already

It won’t be impossible for Groupthinker cults to poison-the-well. Here’s one projecting his hate already for fear that Elon Musk might let people like Donald Trump back on Twitter.

Soon, supporting Twitter or being seen on it, might be a crime people lose their job for.

AUSTIN, TX—According to the latest reports, inflation has hit a 40-year high affecting the prices of many consumer goods. However, one consumer staple is actually at an all-time high. Speech, which as recently as earlier this year was free, is now valued at $43 billion.

“The free exchange of ideas has been under attack, causing massive inflation under the Biden presidency,” explained Joe Squawk of CNBC. “It used to be that people could argue about all kinds of things on Twitter, a bastion of free speech. Then liberals started saying a lot of dumb things, and conservatives started making fun of them. So, the liberals started crying a lot, and the people working at Twitter just started kicking the conservatives off so no one would laugh at them for being dumb.”

Musk, who has more than 83 million followers on Twitter, began amassing shares in the company in January, disclosing a 9% stake earlier this month. That position got him invited to join Twitter’s board, an offer he ultimately rejected, only to turn around on April 14 with an unsolicited bid to buy the company and take it private.

Late last week, Musk gave more details on his financing plans, saying in a securities filing that he had lined up Morgan Stanley and other lenders, which were offering $13 billion in debt financing plus another $12.5 billion in loans against his stock in Tesla, as well as pledging to contribute an additional $21 billion of his own money through equity financing. It’s unclear whether Musk, who heads Tesla and Space Exploration Technologies Corp., would consider selling part of his stake in one of his prized companies to acquire Twitter.

He has said his main motivation in buying Twitter is to ensure the principles of free speech, which he says is “essential to a functioning democracy.”

Elon has also talked about making Twitter’s algorithm open source … meaning we’d be able to see why things trend the way they do, and why exactly we’re seeing certain tweets on our timeline versus others. Essentially … more transparency on how Twitter operates internally.

The financial implications on The Wall Street Journal —

… Mr. Musk, who said of his own Twitter campaign that it “is not a way to make money” in an onstage interview at the Ted conference, on the same day of the filing describing his financial support. But more than half of that backing comes in the form of debt, from Morgan Stanley and “certain other financial institutions,” according to the filing. That means Mr. Musk will need to preserve Twitter’s cash flow—and ideally grow it—to service the debt. Some of that debt is in the form of margin loans backed by Mr. Musk’s Tesla shares. 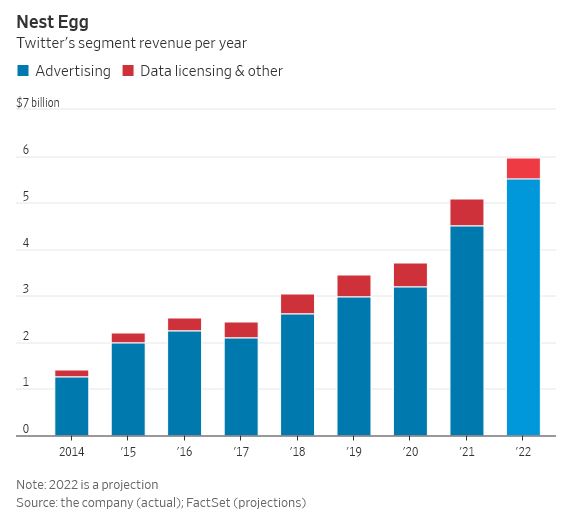 Seen on Substack:
‘Media figures everywhere are openly complaining that they dislike the Musk move because they’re terrified he will censor people less.’

“For democracy to survive, it needs more censorship”! A professional journalist who opposed free speech was not long ago considered a logical impossibility.