The truth behind those so-called “record temperatures” in Delhi: 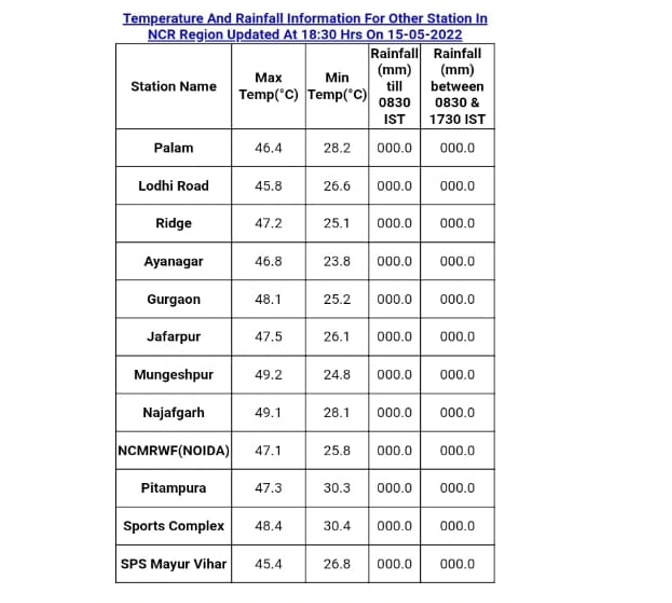 We are told that Delhi experienced record temperatures on 15th May, with 49.2C set at Mungeshpur, which surpassed the previous record of 48.4C at the Indira Gandhi (Palem) International Airport in 1998.

However, alarm bells soon began ringing, when we learnt that temperatures elsewhere in Delhi were nowhere near their record. For instance, at Safdarjun Airport, one of the longest running weather stations and the Base Weather Station for Delhi, temperatures peaked at 45.6C, well below the 1944 record of 47.2C.

Similarly at the Gandhi/Palam Int Airport, this week’s temperature of 46.4C was also far lower than the 48.4C in 1998.

So what lies behind this contradiction?

The Hindustan Times offers some clues:

For a start, they note that the weather stations that set the record and second highest temperatures only started up this year:

On Sunday, all 11 weather stations across Delhi recorded maximum temperatures above 45°C, but Mungeshpur and Najafgarh (in south-west Delhi) recorded readings above 49°C, numbers that the national capital has never clocked.

To be sure, the automatic weather stations in the two neighbourhoods only started operations this year, so no past data is available.

This is a strict no-no, whenever records are being claimed. As we know, local factors can create higher temperatures. These records may therefore be the result of local siting, rather than climate. Only long running stations should be used when records are considered for this reason. We have no way of knowing whether these two sites were even hotter in 1944 or 1998, as there were no thermometers there.

The Hindustan Times goes on to discuss these local factors:

A semi-urban area characterised by a combination of concretised spaces and open farm fields, Mungeshpur also overlooks a number of industries in Haryana, a factor that residents said could be feeding the ongoing heat spell.

“Earlier, we had a lot of trees in the area. But slowly, development work, such as the Bawana industrial area, which is not too far away, or on the Haryana side, where a number of factories have sprung up, are all adding to emissions and the heat. The village has also evolved and with construction work, the number of trees has reduced,” Singh said, adding that the low-cost ACs installed in most homes wilted in the face of the record heat.

“If one looks at the Najafgarh area towards the city, there are hardly any trees left and traffic congestion is a major problem. Even in the farming area and fields, there aren’t as many trees as there used to be,” said Singh.

Paras Tyagi, an environmental activist, who runs CYCLE India, an NGO, said open spaces are harder to find in Najafgarh now, with green cover along the roadsides also reducing due to construction work.

“Land values have appreciated over time and Najafgarh has turned into a concrete jungle over the last couple of decades. Our research clearly shows due to lack of implementation of the Delhi Master Plan and due to poor local planning, this historic town has been irreparably damaged in terms of congestion and concretisation,” he says.

Clearly both sites are heavily affected by urbanisation and the results are meaningless for climate purposes.

The IMD also give a hint:

A senior official from the India Meteorological Department (IMD) said westerly winds from Rajasthan are likely impacting the Mungeshpur and Najafgarh stations more than others in the city.

“These hot and dusty westerly winds hit Delhi’s western side first, and all stations in this part of Delhi are bound to have a higher maximum temperature,” said the official, adding that local factors such as the lack of green cover and presence of concrete structures exacerbate the problem

With the hot winds coming from the deserts to the west, it is inevitable that these sites to the west of the city would tend to see the highest temperatures, just as they would have done in the past when there were no weather stations there.

I am not aware whether the Indian Meteorological Dept have officially endorsed these “records” yet. But I would hope that they conclude that they do not meet the necessary standards.