So it’s a new record. In the 20 years since the National Energy Market formed it has never operated on such a vapor thin margin. Only a few days ago Paul McArdle at WattClarity thought a mere 15% instantaneous reserve plant margin was a headline event, but tonight the grid survived (so far) on a tiny 3% Instantaneous Reserve Plant Margin NEM-wide.  Things were so tight the NSW Minister for Energy sought emergency powers to force coal companies to provide fuel to coal generators for the next 30 days on his say so. Presumably next on his list would be emergency powers from God to make the wind blow.

Two years ago Australian taxpayers spend $13 billion a year in climate action (Moran). As researchers at ANU noted, Australia was leading the way — installing more megawatts per person than any other nation on Earth.  (Blakers)  Despite being the fastest growing and sparsest population, on the most remote nation which was practically a quarry and farm built on coal and uranium deposits,  Australian political leaders rushed to compete for green booby prizes in Beautiful Weather Contests. 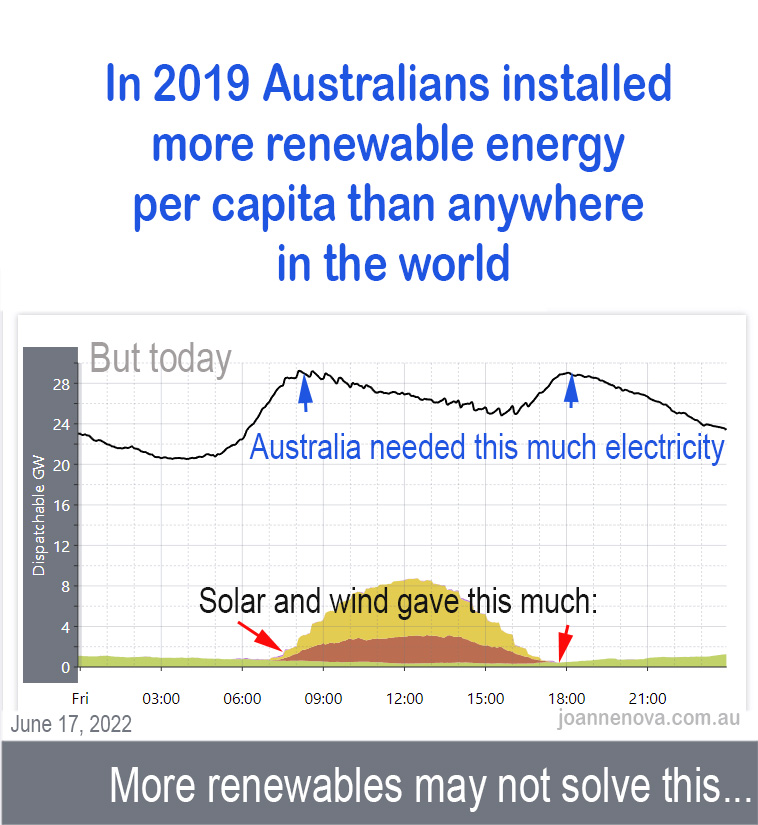 And the toll from the bonfire in prices is just starting with Iron Foundry’s and Brickmakers already going to the wall. Businesses that have survived wars and market collapses couldn’t survive green fantasies.

In the Victorian town of Stawell, about 230kms north-west of Melbourne, local manufacturer Advance Bricks is shutting after more than 82 years in business.

Managing director John Collins says the company, which employs 23 people, could no longer afford the power bill after the collapse of commercial gas supplier Weston Energy in late May forced it onto a plan with “retailer of last resort” Energy Australia.

“The assertion by (Victorian) Premier Andrews and (federal) Minister Bowen that heavy industries can transition to renewable energy is complete and utter fantasy,” he said.

For every green job we create we destroy two to five real ones:

A South Australian manufacturing business reliant on wholesale electricity has labelled the national electricity market a “failure,” after standing down 170 employees due to unaffordable operating costs.

InterCast and Forge managing director Brett Lawrence said he was forced to shut down operations at his iron foundry in Adelaide’s northern suburbs on Wednesday, following the Australian Energy Market Operator’s (AEMO) decision to suspend the spot market.

Mr Lawrence said soaring wholesale electricity prices had been a “nightmare” for the iron foundry, which accounts for about 1 per cent of South Australia’s total electricity consumption per day when fully operational.

Some coal mines have struggled with both covid and also rain from the La Nina slowing down production. Look at the detail published in The Australian. Every coal unit matters. For some reason no one is mentioning the one they shut deliberately at Liddell in March this year. If only they hadn’t….

Its 1430 megawatt Mt Piper station, which provides 12 per cent of NSW’s energy supply, will lose half its capacity this weekend to repair boiler equipment. EnergyAustralia plans to quickly return the unit to service early next week.  Coal supply to Mt Piper is running at lower levels than planned.

“A decade ago, there were six local mines capable of supplying Mt Piper. Today, the power station gets most its coal from the nearby Springvale mine. Production and deliveries are below expected levels in 2022,” EnergyAustralia managing director Mark Collette said.

AGL Energy has pledged to bring back half of its giant Bayswater coal station online by Saturday after engineering issues, with the plant currently running at just 25 per cent capacity.

Unit 4 is expected to return later on Thursday after being out of action for a week due to a maintenance issue on a boiler ash conveyer while Unit 2 is set to return on June 18 following eight days offline to repair a tube leak.

More coal mines would mean one less thing to go wrong on a national grid dependent on coal power.

Moran, Alan (2020) : The Hidden Cost of Climate Policies and Renewables