Despite sitting on a “lake of gas”, Victoria Australia is in danger of running out of usable gas midwinter. The AEMO is back in crisis mode (if it ever left). In Victoria gas supplies are so low, two gas generation plants have been ordered to switch off to preserve some gas storage, and the AEMO is begging Queensland for extra gas supplies. There were even warnings yesterday that homes might run out of gas (though that doesn’t appear to have happened).

A bun-fight is breaking out between Australian states over gas supplies, with others grumpy that Victoria is buying their gas fired electricity, but is not exporting gas to make it. Notoriously, Victoria has also banned exploration for new gas wells, and most of its gas exports would come from offshore Commonwealth managed deposits, supposedly belonging to the whole nation, while Queensland and South Australia were digging up their own gas.

Homeowners are warned that if the gas storage underground (in a old reused gas field) falls too low, their home appliances might not work. Welcome to the first world!

When gas levels in storages fall too low, pressure may drop below the optimal range, air bubbles may form and customers may not receive their gas in a steady stream or at the correct pressure for their plant and appliances. — Australian Financial Review

If only Australia had some other energy sources to use?

It takes real genius to have an energy crisis in a nation which is the fifth biggest gas exporter in the world, the highest value coal exporter, and has the largest reserves of uranium. In the race to the bottom, Australia is burdened with more energy per capita than anywhere on Earth — and yet Big Government has succeeded, and wildly, showing that the richest nation on Earth can still be poor.

Australians are paying wildly high prices for electricity in order to stop the storms of 2100 by trying not to use two of the three assets above — while exporting all of them.

The Australian Energy Market Operator has activated its emergency gas supply guarantee mechanism for just the second time on record to help arrest shortfalls in Victoria as the nation’s electricity market lurches to a fresh crisis. Storage levels at Victoria’s underground gas storage plant, Iona, dropped to a record low and forced AEMO on Monday to put an official system security threat in place until the end of September. 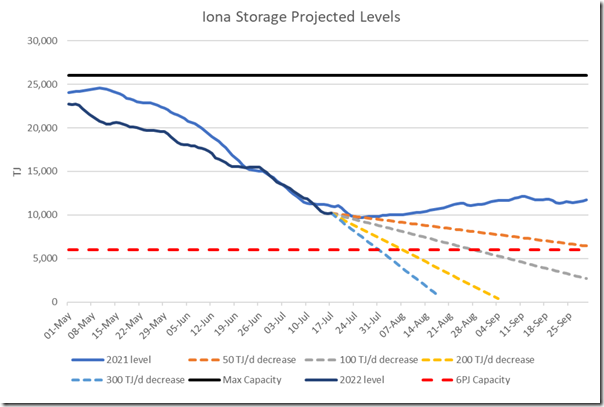 Yet strangely they didn’t see this coming until there is just two weeks to go?

The Iona gas storage facility in Victoria is on track to fall to an all-time low of just six petajoules by August 6, with the depletion of inventories leading to the risk of “total system” gas supply shortfalls for the state.

In a shock to bureaucrats, normal rules of supply and demand apply:

A rare cap on Victoria’s gas prices has been in place to calm the market but the move has -provided an incentive to producers to direct supplies to other states further exacerbating the tight market.

Who would have thought artificial price caps create shortages?

Victoria is relying on other states for electricity that often comes from gas even as new rules prevent the export of spot market gas from the state to other regions, industry sources have complained.

Under rules imposed by the Australian Energy Market Operator on Tuesday, gas processed in Victoria and purchased through the spot market cannot be sent outside the state to NSW or South Australia or Queensland amid a critical shortfall that threatens to destabilise the energy system.

… one gas industry executive accused Victoria of “playing politics with gas”, with the result that customers in Queensland and NSW were being hurt.

“I don’t think Queensland is going to tolerate it for much longer,” the executive said. “They will want to secure Queensland supplies, maintain LNG export volumes and investor confidence. They will want other states to play their part in bringing on supply in future years.”

Industry sources say the $40 a gigajoule price cap that is still in place in Victoria but not in other states has contributed to the problem, as those few buyers that source gas from the spot market buy it there to access cheaper prices.

“The price cap in Victoria is creating havoc,” one said. “There is no shortage of gas; the issue is interventions upsetting the whole market.”

If Australia was using all our energy resources instead of just the politically fashionable ones, we’d have plenty of brown coal to rely on and we could save our gas for essential services. If we hadn’t banned or stopped gas exploration we’d be exporting more, making more money at bonanza prices, and helping our friends in Japan and Europe too.

If we thought carbon dioxide mattered, we’d have nuclear plants.

The Petroleum Atlas of Victoria (2001) gives an overview of the regional geological and geophysical characteristics of the Otway and Gippsland basins.