Just an update on South Africa: Blackouts continue, and the people are not happy:

Some are so desperate for electricity they are rewiring substations and ending up in hospital:

A Johannesburg man who tried to illegally reconnect electricity faced injuries after he allegedly opened an electricity substation and it blew up in his face.

The spokesperson revealed that there is a ‘serious problem’ of vandalism of infrastructure in the City. This includes incidents where residents attempt to illegally operate the electricity network – they are often aided by unqualified electricians and try to reconnect or make illegal connections.

We hope he is OK.

These are eight hour regular rolling blackouts. People have Apps on the phone to tell them when their next blackout starts. People on twitter are telling others to go home early so they can use electricity before it runs out. They say, don’t worry, your boss won’t mind, they need to get home early too! Others are showing photos of haircuts, interrupted. 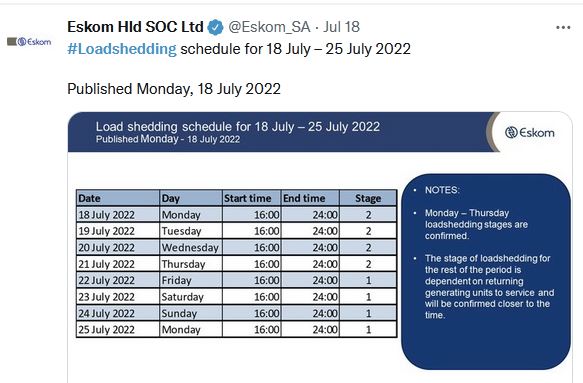 According to Andre de Ruyter the Board of Eskom (the main electricity network) has no engineer, no chartered accountant, and no experienced industrialist and businessman on the board. Perhaps they have diversity instead, just not the right kind.

Meanwhile, not surprisingly mental health is not too chipper:

You can’t do your work because there’s no power. You eat late and bolt your food before the lights fail. And then to be at home, in the utter dark, gives you the creeps. As blackouts (popularly referred to as load shedding) unfurl across South Africa, triggered by problems that have overwhelmed its energy provider, stress is taking a mounting toll on mental health, experts say.

“People are frustrated, some (are) angry, some are experiencing symptoms” of post-traumatic stress disorder, said Sinqobile Aderinoye, a psychologist in Johannesburg. “The consistent on-and-off of the electric grid is creating an air of disillusionment.”

Anxiety, depression and other disorders were already up almost two-thirds since the start of the coronavirus pandemic, according to Cheryl Johnston, a Johannesburg-based psychologist

Not surprisingly officials are hinting that they might keep using some coal:

Its Camden plant in Mpumalanga province, one in a fleet of aging stations, could close in 2027 instead of 2025, Mandy Rambharos, head of Eskom’s Just Energy Transition department, said in an online presentation. Keeping the plant open longer would allow the development of more renewables and is “not a life extension,” she said.

People are in hospital, can’t do their job, and are suffering depression and anxiety, but Reuters is worried that it might slow down the “transition”:

Ganymede: I feel your stress. Last Thursday we had a “technical fault” that lasted 26 hours with us in the dark. When that was finally fixed, we’re due for loadshedding two hours from then. This country is rough now

Miguel Valdoleiros: @Eskom_SA  How about actually leaving the power on when there is no load shedding. We had no power since 6 last night, came back for 2 hours this morning and then off again. Get your shit in order!

Mduduzi Ngwenya:
So I reside in Boksburg #WindmillPark . Our schedule shows we pending loadshedding from 16:00 today. Taking into account that we have not had electricity for almost an hour now, are we now going to also fall into the bracket of loadshedding when it starts?

In other South African news:

Javier Blas says: OIL MARKET: The only operating oil refinery in South Africa was forced to shut down this weekend after it **ran out of crude** (yes, you read that just fine: the refinery completely ran out of crude)