There’s been a transformation in the last 6 years — the polarization between attitudes of young men and women is expanding like a bubble.

The new Gallup results suggesting the suddenly as many as 44% of young women identify as Liberal but only 25% of young men do. It’s a gaping 19% maw. Eric Kaufman shows that its not because more women are going to university now, but mostly because more young women are Woke. The most important predictive factor in a thirteenfold (wow) kind of way, was simply whether they opposed controversial speakers on topics like BLM, abortion and  LBTQ-etc. In other words, it’s expanding like a designer fashion trend. It’s based on a meme, not something solid or generational. That’s good news. What goes up fast…

Wokeness targets women — offering them victimhood-candy and someone to blame, but almost always at the expense of men. Not surprisingly men are not turning up for their lecture on toxic masculinity. Think Gillette. Young men still want to impress young women, and being “Woke” can get the girl, but even that’s not enough to adopt the ideology.

Spread the word. Once the news gets out that political correctness is a girlie thing, and strong men stand against it, the pendulum will swing.

Recently, the centrist pundit Matthew Yglesias tweeted the historic time series of Gallup surveys on political ideology among Americans aged 18 to 29 (shown below).

The graphs demonstrate a growing ideological gap between the sexes, with a rapid increase in the share of “liberals” among women but not men. As polarisation deepens, fewer young people are calling themselves centrist or “don’t know” and picking an ideology, but only among women are they disproportionately moving Left. 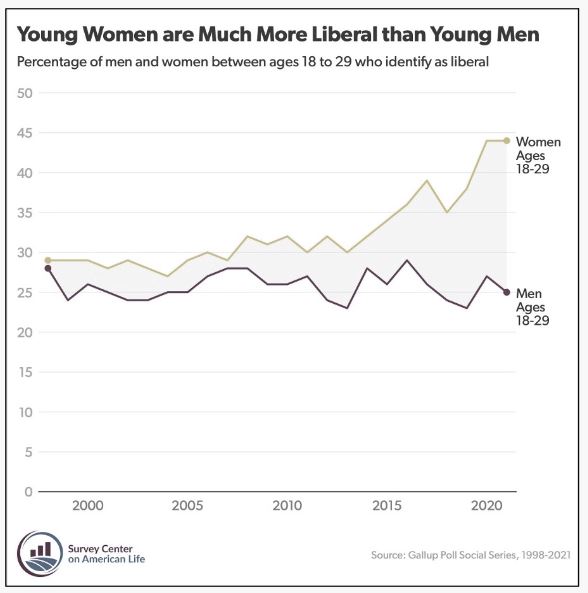 By 2016, a record 42% of women identified as liberal, versus 28% for men. I lack access to the raw HERI data for subsequent years but the Foundation for Individual Rights in Education (FIRE) surveys of 55,000 undergraduates in the top 150 colleges in 2020 and 2021 show that 61% of women lean liberal compared to 44% of men, a whopping 17-point gender gap.

…what underlies the astounding gender divergence in youth attitudes? Essentially, it appears to stem from a wokeness divide. In the FIRE survey, when you control for opposition to allowing controversial speakers (on BLM, abortion and trans rights) on campus, the statistical effect of gender on ideology collapses thirteenfold in statistical power.

Political Correctness is for girls:

This survey Kaufman points out shows how strong the effect is in teenage girls and women up to age 25. 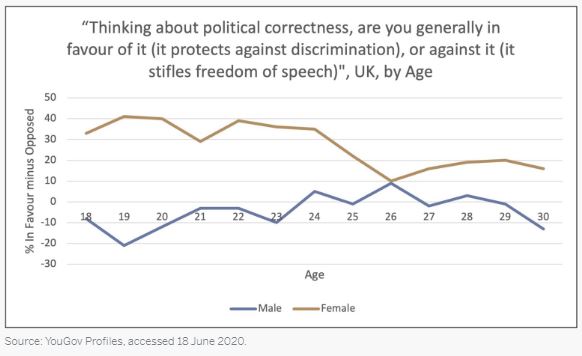 Once young women settle down with a man, the fashions change.