The Nord Stream 1 gas pipeline from Russia to a desperate Europe was supposed to re-open yesterday, instead, Russia announced that it will remain closed due to an oil leak, indefinitely. The announcement was made after markets closed. Germany has about 3 months of gas in storage.

Faisal Islam, the BBC’s economics editor, described the indefinite closure of Nord Stream 1 as a very serious development, noting that Russia had kept supplies into Europe flowing even at the height of the Cold War.

The stand-off with Russia has forced countries to fill their own gas supplies, with Germany’s stores increasing from less than half in June to 84% full today.

Apparently this is the oil spill that shut down a billion dollar pipeline: 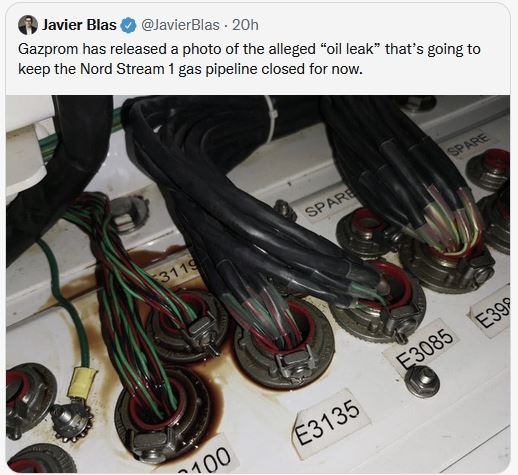 @PolemicTMM –– Masterful trolling of the EU by Mr P.

@PrivatinvestN — Is this a Friday night joke or have they actually published this?

@JavierBlas —  They did. Obviously, all pretences are gone.

@vulcanhammer –– You’ve obviously never had Russian instant coffee. You would then understand why the pipeline is closed.

Jokes aside,  Javier Blas warns — “it’s down for good”

Gazprom seems to imply here that the only operating turbine at Nord Stream 1 pipeline can only be repaired now at one of (overseas) Siemens Energy specialised workshops, and until that happens, the pipeline won’t re-start (in other words, it’s down for good)

Seimens says that the leak should not stop the operation of the pipeline.