The German Klimaschau here presents a new video, this one featuring a new study on the Antarctic Ice Shelf published in Nature Geoscience: 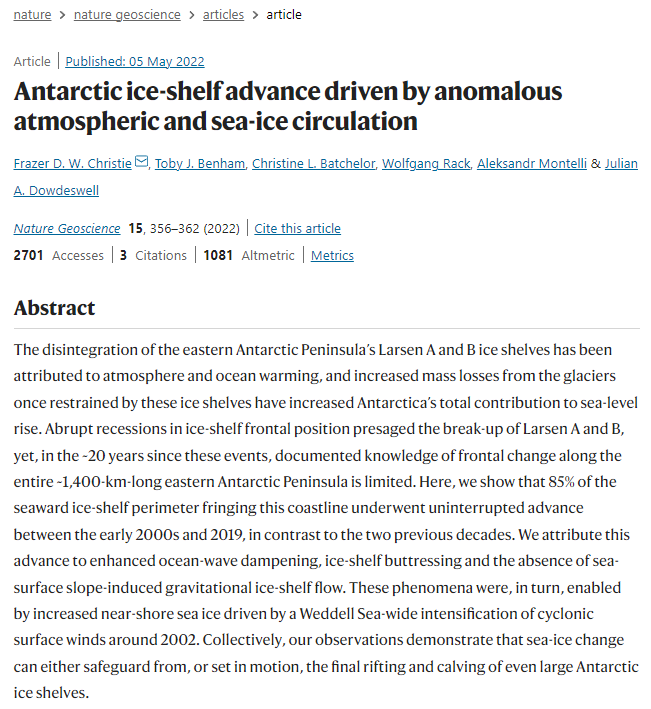 According to a University of Cambridge press release dated May 13, 2022, “The eastern Antarctic Peninsula Ice Sheet has grown in area over the last 20 years, due to changing wind and sea ice patterns.”

So what caused the ice shelves to advance? In the absence of atmosphere and ocean warming over the past 20 years, the dominant control was found to be a change in regional wind patterns over the Weddell Sea, which served to push sea ice against the ice shelves.

Between 1985 and 2002, in contrast, wind conditions in the same area caused sea ice to move away from the coast. By removing the buttressing effect of the sea ice and exposing the ice shelves to damaging ocean waves, stress on the ice shelves increased, ultimately leading to calving of icebergs.”

Note the press release seems to be stating there’s been no warming at this region.

The U. of Cambridge press release also adds that the advance is linked due to decade-scale [natural] changes in atmospheric circulation, which has led to more sea ice being carried to the coast by wind.

Co2- warming is not what is driving the ice activity on the eastern Antarctic Peninsula.