Private daily showers to become a luxury for the privileged and wealthy in Germany?

“What if we showered/bathed only once a week?” 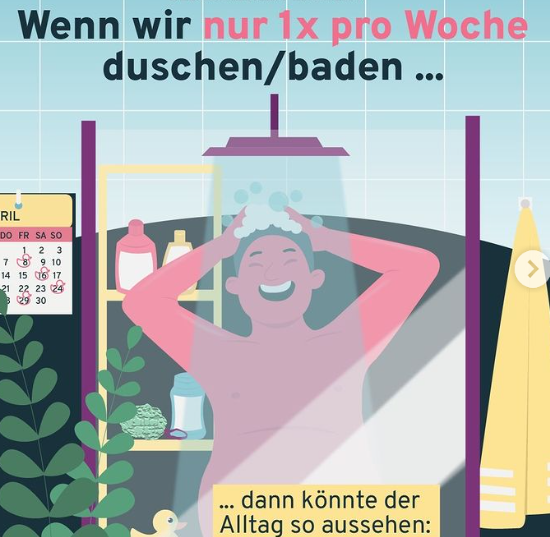 What the BBC is to Great Britain, are what the WDR and ARD public broadcasting are to Germany in terms of television and radio presence.

Just some weeks ago, the Instagram site of WDR kugelzwei presented some tips that save heat and energy for citizens to consider: showering only once a week.

After all: “Around 100 years ago, it was still customary to bathe only once a week,” wrote kugelzwei. “Today, people almost look at you strangely if you tell them you don’t shower several times a week.”

The “benefits” of showering only once a week

Supposedly, there are in fact numerous benefits from showering much less frequently, according to ZDF’s kugelzwei. For example, people would maybe learn to become “a little more tolerant of body odor”, and the unwashed would save time in the bathroom every morning.

Use sinks, not showers

Moreover, fitness studios could replace showers with just plain sinks. After a sweaty workout, one could freshen up in cubicle with with a simple sink and a washcloth instead of using a shower cubicle.

Another idea proposed by the WDR’s kugelzwei is public bathing: “Maybe showering or bathing could become a weekly highlight,” they suggest. “We would celebrate this in public bathhouses – perhaps also in the company of others.”

WDR also cited research from Great Britain on the impacts that lockdowns had on showering. “In a YouGov survey, 17% of Britons said they shower less since the lockdowns. Among younger people aged 18 to 24, as many as 27% skip showering sometimes.”