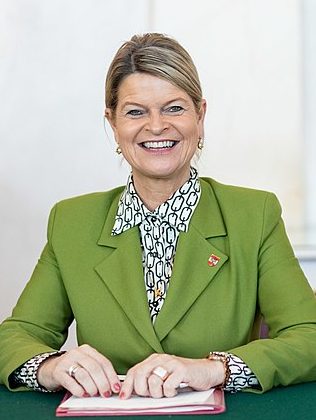 Minister Klaudia Tanner, back in 2020 when she looked decidedly more chirpy.

Klaudia Tanner, the Austrian Defence Minister, dropped the extraordinary bombshell that a long blackout is coming. She hopes you don’t notice that is a dramatically bad and new threat. It’s all Vladimir Putin’s fault, she says (not the government that burned energy security on a Green bonfire in a fantasy quest for nicer weather). And when it happens, if you suffer and run out of supplies, or die in the cold, that’s your fault.

Who knew it was your job to maintain wood, oil or gas and food and water to tide you over a week long total blackout? Well, now you do.

So the announcement of the shocking state of the Austrian grid is buried under the excuses:

“The question is not whether it (the blackout) will come, but when it will come,” said Tanner, blaming the war in Ukraine.

“For Putin, hacking attacks on Western power supplies are a tool of hybrid warfare. We must not pretend that this is just a theory. We must be prepared for blackouts in Austria and Europe,” she added.

Who, exactly, is responsible for Austrian energy security: Is his name Vladimir?

Every citizen suddenly needs to plan for a long blackout:

Tanner spoke to how unprepared Europeans were for crippling elongated blackouts by warning, “one-third of citizens would not be able to supply themselves on the fourth day of a blackout at the latest.”

So if the blackout doesn’t happen, or only lasts a day or two, the government can rave about their success in preventing a longer one. And if the Big Bad One does happen, they have laid out the excuses already.

Imagine a more honest interview: Minister says the unthinkable — a long unprecedented loss of power in the depths of winter is likely. Assume your government won’t be there when you need them. It’s so bad you need to stock up on food, fuel and water.

Imagine a real opposition: The incompetent government could have built nuclear power plants, kept coal plants running, and none of this would be happening.