Visions of apocalypse from Sky News:

The UK has recorded an average annual temperature of more than 10C (50F) for the first time, the Met Office has said.

The national weather service also said 2022 was the country’s hottest on record, confirming provisional figures that the year would set a new record.

Such a freakishly hot year is now likely to happen every three to four years, the Met Office warned, whereas once it would have struck just once in 500 years, had humans not polluted and warmed the climate.

Met Office Climate Attribution Scientist, Dr Nikos Christidis, said a UK average temperature of 10C "could occur almost every year" by the end of this century, if the planet warms by around 2.7C as is currently projected.….

Scores of other records were smashed all around the globe last year, which also saw Europe’s worst drought in 500 years, savage heat in India, and multibillion dollar losses from Hurricane Ian in Florida and from flooding in Pakistan.

Burning fossil fuels, intensive animal farming and slashing down forests are contributing to the rising global temperature, which in turn is driving costly, violent and extreme weather.

"Human-caused climate change explains the unprecedented nature of the summer heatwave in the UK as well as the sustained warmth seen throughout most of 2022, " said climate science professor Richard Allan from Reading University.

Higher temperatures in the UK are driving more severe heatwaves, droughts, wildfires and flooding, he said.

"And these impacts will become progressively worse until global temperatures are stabilized by cutting global carbon emissions to net zero."

Despite the claims made by the Met Office that “a UK average temperature of 10C could occur almost every year by the end of this century”, their own data shows that warming in the UK stopped two decades ago. Average temperatures did rise by a degree during the late 80s and 90s, so we are now living with a new, higher temperature baseline. Annual temperatures may now hit 11C in CET, but this is only 0.5C higher than other years before the 1990s warm up. Hardly catastrophic! Indeed it is the relative absence of extremely cold years nowadays which is most responsible for the rise in average temperature.

But what about these claims of extreme weather? According to Sky, “Hot temperatures throughout the year fuelled prolonged drought, threatened crops and drove hundreds of excess deaths.”

For a start, hot temperatures do not fuel drought. The reverse is true – dry, sunny weather leads to higher temperatures. As for “threatened crops”, maybe Sky should have got the actual data from DEFRA:

Cereal production was up by 9.4% last year, on the back of much higher yields, which were the third highest on record. Apparently wheat prefers sunny weather! Who would have guessed?

And as we already know, excess deaths could not have been driven by the hot weather, because they have been running at a high level ever since May, with no spikes at all in the summer:

What about the claims of global extreme weather – droughts, floods, hurricanes?

Once again, Sky’s claims are contradicted by the facts.

The number of deaths from disasters, for instance, were close to record lows last year:

Hurricanes, and particularly major ones, were close to the lowest on record in 2022:

And although global cereal production was marginally down last year solely because of the war in Ukraine, it was still one of the highest on record, making a nonsense of Sky’s claims of catastrophic droughts: 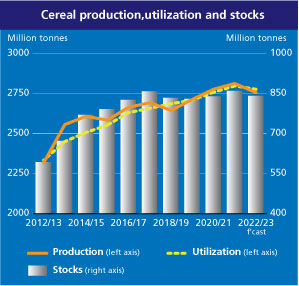 All of this rubbish begs the question of who is actually directing this torrent of Goebbels-like propaganda? It is not only the BBC and Sky who continually propagate these lies; it is pretty much the whole of the media here and in the western world as a whole.