Just two windfarms account for nearly half of £227 million cost
London, 9 January: New analysis from Net Zero Watch has revealed that the cost of paying windfarms to "switch off" has soared, from £143 million in 2021 to £227 million in 2022, an increase of £84 million, or 60%.
Much of the increase has been driven by the commissioning of two Scottish offshore windfarms. Moray East and Beatrice, both situated in the Moray Firth, are now receiving £100 million per year between them. 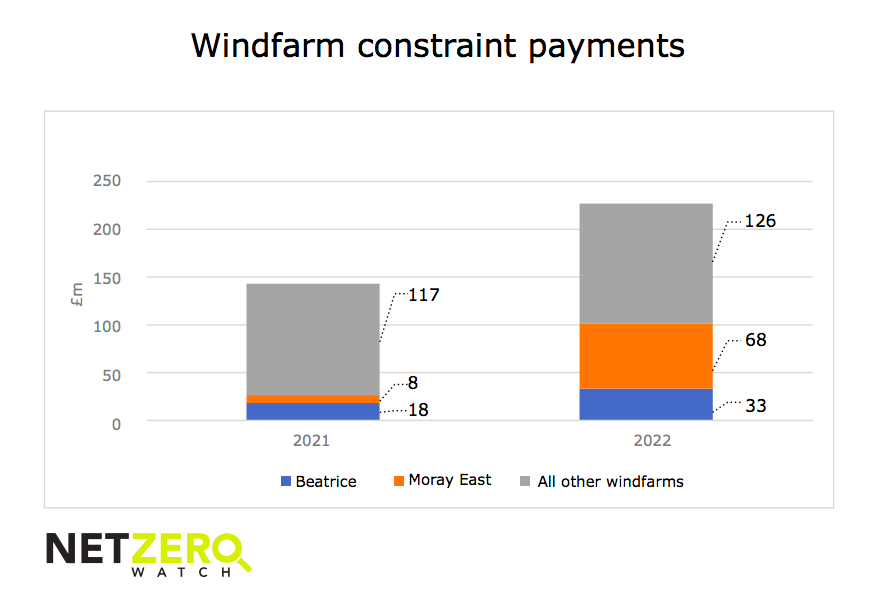 The news has generated suspicions that both are taking advantage of a loophole in the system that allows generators to be paid twice for the same electricity, with consumers footing the bill.
Net Zero Watch’s deputy director, Andrew Montford explained:
"Although constraints payments are widely understood as a payment to switch off, in fact the rules only require generators to keep the power away from the transmission grid. If they can divert it elsewhere, for example to a battery, they can receive the constraint payment and still sell the power."
However, the findings are also symptomatic of deeper problems with the governance of the electricity system and the way renewables have been rolled out before the grid was ready to take them.
Energy economist Professor Gordon Hughes said:
"It was very foolish of National Grid to agree to grid connections for new generators in the north of Scotland before upgrading the capacity of the North-South transmission lines."
Last year, it was revealed that Moray East had exploited another loophole in the electricity system rules to delay activation of its agreement to sell low-priced power to the grid. As a result, it has been able to boost its income by hundreds of millions of pounds, again at the expense of consumers.
Net Zero Watch’s director, Dr Benny Peiser, said:
"Whether through utter incompetence, or shameful cynicism, the Government, National Grid and Ofgem have put in place an electricity system that allows renewables operators to rip off the consumer left, right and centre. They seem to hold UK households and businesses in contempt."
Further details:
* Moray East only became fully operational in 2022, so its 2023 constraint income is likely to be higher still.
* Net Zero Watch revealed the existence of the constraint payment loophole last year. The issue has been brought to the attention of Ofgem.
* There is no suggestion that either windfarm is doing anything illegal.